'Tis Rivalry Friday and yeah, Penn State doesn't really have a true Big Ten rival. I know Michigan is hated, I know OSU has played some classics of late, but...I don't know. Nothing moves my soul this week. So hey, why not let the newly rival-less Nebraska Cornhuskers take a few shots at the Nittany Lions? Big Husker Mike (honestly, that sounds like someone who would just crush your face at a trucker-filled bar, we're going to get along with Nebraska folk just fine here in the Big Ten) of the wonderful Cornnation blog gave me a few thoughts on finding themselves in the same damn conference as occasional nemesis Penn State. Plus he finished the article with conciliatory language, mentioning his excitement about joining the Big Ten. God, these Husker fans are twelve levels of goodness.They're like Santa Claus; lots of red and white, very dedicated, always jolly. My thanks to Mike, plus I threw in a poll question pitting 5 years from now PSU v. 5 years from now Nebraska...

When people think about Nebraska and Penn State, many fans harken back to 1994 when both teams went undefeated. But the national championship went to Nebraska, much to the chagrin of Penn State fans. The two teams had flip-flopped in the polls during the season, especially when Nebraska had to turn to walk-on Matt Turman as quarterback after Tommie Frazier and Brook Berringer landed in the hospital with various maladys. Penn State fans probably felt indignant about getting passed over by the Huskers without losing, yet they didn't see much wrong with the Huskers previously getting dropped for having their top two quarterbacks get injured. Would Penn State have remained undefeated that season if Kerry Collins missed most of the season? 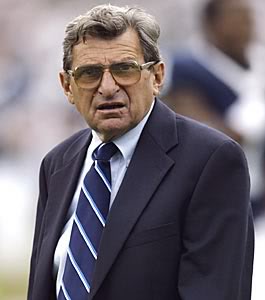 What? We went undefeated and all we get to show for it was a lousy "Rose Bowl Champions" tee shirt?

We'll never know the answer to that question, of course. So when I hear Penn State fans complain about 1994, I usually just shrug my shoulders. At that time, it wasn't like the Big Ten really cared much about playing for the national championship. The goal of Big Ten teams traditionally has been to play in the Rose Bowl, and Penn State got their Rose Bowl title. Mission Accomplished, I guess.

But was Penn State deserving of more? I'm not sure what that could be. Should Nebraska and Penn State both been declared co-champions? While that seems like the sportsmanlike thing to do, there's one problem with that: Nebraska was clearly the better team in 1994.

We'll never know for sure, but when I'm asked what would happen if a BCS title game had existed in 1994, I have a simple answer: Nebraska would win, probably by two touchdowns. That 1994 team was a pretty dominant team that still managed to win despite losing one the greatest players in college football history for most of the season. They throttled a pretty darn good Colorado team without Frazier, and blew out UCLA with him. And the cherry on top of it all? Defeating Miami on their home field, in the Orange Bowl, at night. Miami hadn't lost a night game at home in years, and the 1994 Huskers slayed that beast in their own lair.

Maybe that's not fair to Penn State fans, since they didn't have the opportunity to do the same. That argument might carry some weight if it hadn't been for 1982. No, we haven't forgotten how Penn State stole a national title from Nebraska thanks to two bad calls that even the Penn State student newspaper called amongst the worst ever in college football history.

With seconds left, Penn State quarterback Todd Blackledge threw to Mike McCloskey who leaped to catch the ball, landing well out of bounds. But the referees ruled it a catch, and gave Penn State the ball at the Husker two yard line with nine seconds left. On the next play, Kirk Bowman trapped a Blackledge dumpoff pass in the end zone for a gift touchdown. Nebraska fans howled. Dan Young, who later would join the Nebraska coaching staff as an offensive line coach, marketed a t-shirt that showed the Beaver Stadium field with the sideline moved an extra 20 feet out to accommodate McCloskey's catch.

Penn State would go on to win the national championship that season, while Nebraska would finish 11-1. So pardon some of us older Nebraska fans if we find complaints about 1994 a little disingenuous. Hard to feel sympathy about 1994 when 1982 was downright stolen.

So now Nebraska and Penn State are "designated rivals" in the Big Ten. Since we're the new kids on the block, we've left all of our rivals behind. But we do know something about a "forced rivalry"...and that it doesn't really work. Rivalries evolve; they cannot be created. Bill McCartney tried to unilaterally designate Nebraska as Colorado's "rival"...but the feeling was never really mutual. Sure, we scoffed at the idea, even after ABC tried to enforce it with a "Day after Thanksgiving" game...but it never became a rivalry to Husker fans. When Colorado was good, it was a big game, but it never reached rivalry status from our perspective. Missouri tried to heat it up in recent years as well, but it never became a rivalry that transcended the game itself.

So will Nebraska and Penn State become rivals? It's too early to tell; much of it will depend on how competitive the matchups will be. I feel pretty confident that in the forseeable future, Nebraska under Bo Pelini should be ready to contend for the West Division title (Legends? Leaders? Who knows, who cares. It's mostly the western teams, so I go with that.) If you aren't familiar with Pelini's reputation as defensive mastermind, you soon will. With Pelini, it isn't so much scheme as it is precision and development, putting the best combination of players on the field in position to stop the opposing offense. In the Big XII, that meant using smaller linebackers in nickel and dime packagess to cover the wide open spread offenses so prevalent. That philosophy won't work as well in the Big Ten, so expect Pelini to adjust to shut down the running game.

Will Penn State remain a power in the East Division? From the outsiders' perspective, Penn State has been a hot-and-cold team, with some really good teams some years, and some not-so-good teams other years. Husker fans will be spending a lot of time getting to know the other teams in the Big Ten, so I won't begin to pull a snow job and declare whether Penn State is going to be having a really good or a really mediocre season. I get the feeling that as long as JoePa is the coach, Penn State will be in this mode. And I don't think Paterno is willingly going to retire anytime soon. Either Paterno's health will fail him, or the administration will force him out, like Florida State did with Bobby Bowden.

And then, all bets are off. No coach wants to willingly follow the legend. Oklahoma struggled after Barry Switzer. Alabama struggled after Bear Bryant retired. Nebraska actually didn't do too badly after Tom Osborne retired, though some fans didn't appreciate it until encountering the Bill Callahan Clusterfool.

(What? You wanted more smack talk? We'll probably get there, but we're still in that honeymoon phase. We Husker fans think that you guys like us, so we're going to play nice for a little while. We'll wait for the first screwjob from the Big Ten refs, Jim Delaney hazing us, or basketball season before we get too worked up about it...)