Six teams down, six to go.  The next stop on our virtual road tour is Champaign, Illinois, home of the Fighting Illini.

SEVENTH IN A SERIES: THE ILLINOIS COCKTAIL PARTY PREVIEW

Illinois at a glance...

Heading into bowl season no one really knew what to make of the Illini.  Heading out of bowl season the same might be said.  The 38-14 dismantling of overachiever Baylor in the Texas Bowl put a feather in Ron Zook's cap, and showed why the Illini had the best rushing attack in conference.  But what could account for tepid performances against Indiana, Purdue, and Minnesota?

[Conversation Pointer: The Illini really know how to get it done on the ground, with Top 5 rushing attacks in the B1G since 2006.  But where has the passing game been?  Illinois has ranked in the bottom 2 in conference for passing yards four out of the last five seasons.]

In many ways, Illinois football heading into 2011 is a tale of two cities.  On one hand, Quarterback Nathan Scheelhaase is a solid playmaker with a capable command of Paul Petrino's offense.  And speaking of the coordinators, the addition of coach Mike Gillhamer from the Carolina Panthers to the secondary gives Ron Zook one of the best crops of assistants in the Big Ten.  That's a lot of game day acumen.  But will it make up for a serious loss of star power?  Gone are Mikel Leshoure, Corey Liuget, Clay Nurse, Martez Wilson, Nate Bussey, Jarred Fayson, and Eddie McGee, three of whom went early to the NFL.  Questions abound in the defensive front seven, and at wide receiver. 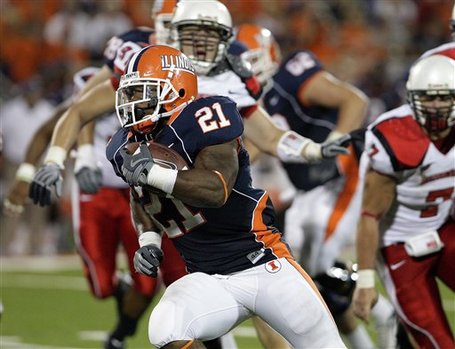 Is Jason Ford the future of the Illini rushing attack?

Still, you cannot discount the benefit of a favorable schedule.  Gone is perennial ball buster Missouri.  In place of the traditional neutral site matchup are five home games in a row to open the 2011 season.  Better yet, the Illini only face one road opponent (Penn State) that went to a bowl last season.  That's a recipe for success in Champaign.  Especially if Zook continues his tradition of developing punishing running backs.

[Conversation Pointer: There's no reason why the Illini can't be 5-1 and ranked heading into an October 15th matchup at Ohio State.  If Ron Zook can continue his tradition of playing the Buckeyes tough, he'll have a chance at becoming one of the front runners in the Leader's Division with a win at Penn State.]

Illinois finished last in Big Ten in 2010 in punt returns and 100th nationally in kickoff returns.  If they can make even a modest improvement in the return game, they're bound to improve on scoring offense.