We interrupt/delay today's scheduled batch of Illinois hate to discuss a team people actually give a damn about (Illinois fans only care about their basketball team...and who could blame them? The Illini football team was the 6th losingest team in BCS conferences from 2000-2010, at 52-79.)

Given the latest allegations coming out from Ray Small about Ohio State athletes getting special deals on cars and selling Big Ten rings/other memorabilia, the writers here at OTE thought it was about time we did a special "OSU Scandal" potluck indictment.  Below the jump, we present 4 counts (i.e. questions and answers) about the Buckeye scandal:

It's hard being an athlete," Small said. "That was basically what I was saying. (The Lantern author) just flipped my words around and make the whole Buckeye Nation hate me."

Small went on to say that The Lantern got the majority of the story wrong.  The Lantern denied Small's allegation and states that it has the interview on tape.

Ted Glover: The Lantern is the Ohio State Student paper, and if I could invoke all my legal training I got from Law and Order, I move to strike Ray Small's testimony from the record, and move to dismiss these charges against my client.

The Bench: Motion to strike the testimony is denied. However, the bench will look away for ten seconds, and if you move to strike Mr. Small, I won't notice. (after a pause) Now on with the Counts.

Count 1 - Taking Improper Benefits (Tattoos): Ray Small's accusations make it clear that Pryor, Herron, Posey, et al. were not the only (or even the first) Buckeyes to sell the trinkets they won as football players for extra cash. Small also states that OSU players may have gotten deals on cars from local dealerships. These are all NCAA violations....but honestly, does any of this bother you? We're not talking pay-for-play, or academic fraud (indeed, OSU is in the top 10 nationally in APR), or even dirty recruiting -- just players selling trinkets (which they were free to do when they graduated without penalty) and getting sweetheart deals on wheels. Do you feel like the hulabaloo over the players' actions (I'm not talking about the coverup yet) is reasonable, or completely out of proportion? 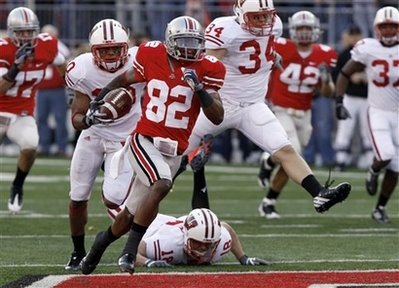 Hilary Lee: When I heard about Ray Small's interview with OSU's student newspaper I felt a jumble of emotions. I approach this issue from three different perspectives... that of a fan, that of a former college athlete, and that of a law student who is writing an article on the antitrust implications of some of the NCAA's financial aid by-laws. As a fan, I feel some disappointment. Not because I particularly like Ohio State (I don't... oh how much I don't) or because I feel any connection to their memorabilia, but rather because I'd like to believe that the symbols of victory in hard fought games are as important to the athletes as the wins are to the fans. With every story like this that breaks, that appears not to be the case a little bit more, which stings.

As a former athlete, I mostly understand. In my sport and division, improper benefits were discussed but weren't a realistic problem. Yet, I still know what it is to be a cash-strapped student, and how tempting it must have been for those players to just say yes when offered something for nothing. After all, it's not as though these guys are out there haggling for benefits... they're just taking what others are willing to give. But, as a law student who has read a considerable amount about financial aid in the NCAA recently, I feel frustration. Frustration because the current NCAA policies have led to an unequal playing field that favors programs with large budgets and wealthy boosters who are willing to do whatever it takes to lure talented high schoolers to their programs. And, as long as this type of behavior is dealt with by just a slap of the wrist, and a turning of heads, I doubt that the NCAA will see any impetus to change its own rules....

Ted Glover: Does it bother me that they sold championship rings and gold pants trinkets? As an OSU fan, yeah, it bugs me, because as fans I think it's safe to say we would give a right arm to say we earned those as a member of the Ohio State football team. Does it get my dander up that they sold what essentially is their stuff for money? No, not at all. I think most people that had to work their way through college, or didn't get Mom and Dad to pay for school went through periods of financial duress, and if you had to hock something to pay a bill, you had to. It's their stuff, and as much as I dislike they don't appreciate what those things mean symbolically to Ohio State fans, if they want to sell them, it shouldn't be illegal. Speaking strictly about the players selling their things for money, that has been blown way out of proportion.

Graham Filler: You're sitting in a lawn chair, waiting for the annual Memorial Day parade to roll by you. All of a sudden, two people come over the hill, yelling, waving, and running like a bat out of hell. They fly, along with half of the high school marching band, huffing and puffing in their suits, instruments tossed aside, sprinting by you with a crazed look. Unless you are a dullard, it has probably occurred to you that something is going on.

Those sprinting paraders? That's the accusations and evidence that has flowed like beer at a toga party since Tressel's non-denial denial press conference back in the Winter months. Whatever legal term you want to use, the evidence is there, the players are there, the emails are there...it's too damn obvious that the Ohio State University football program was overrun these last few years by corruption and (GASP) lack of institutional control. Play the technicality game all you want, but the rushing river of proof is flooding all levels of the OSU program.

Does it bother me? Not really. There are rules out there. You can foster an environment of compliance with these shady-ass rules. Or you can not. OSU didn't, even hiding among the perfectly smoothed out vest of morality that Tressel wore and denying what was about to kick them in the nuts.

Count 2 - Taking Improper Benefits (Automobiles): Related to Count 1 above -- does a 5 game suspension for Pryor, Herron, Posey, Thomas, and Adams fit the "crime"? (Note: we're only talking about the punishment for the players). And if not, what SHOULD be the punishment?

Hilary Lee: I think it's a fine punishment. Ordinarily five games might seem excessive, but let's be real, it's not as though most of those opponents in OSU's first five games are exactly a challenge. Given the state of the programs they're facing, it's really more like a two game suspension (MAYBE three if Colorado gets its shit together this year...)

Ted Glover: Yeah, five games is plenty if you're talking only the players. I can't disagree that OSU should vacate wins, either. The players were ineligible, and they played. I don't like the rule, but it is a rule. They broke it, and should suffer the consequences

Count 3 - Loss of Institutional Control: In my opinion, Coach Tressel's failure to report the players' violations to even his own compliance office/athletic director is the far more egregious crime -- he's an adult, his job is to know the NCAA rulebook and follow it, and knowing of these violations and saying nothing, not even to his bosses and own compliance department who are there to help, shows a remarkable lack of ethics for any NCAA coach, must less the head football coach of THE Ohio State University. Frankly, I don't think a 5 game suspension is a penalty at all for what Tressel did (I mean, he still gets to coach DURING the week, just not on 5 Saturdays). What additional punishment (if any) should be applied to OSU for Tressel's lack of judgment? And -- should Tressel be fired over this?

Hilary Lee: Much as it would make me happy to see Sweatervest fired, I can't see it as fitting in this situation. How do you a fire a coach when you know that every other big time program is doing this too, and that most likely your replacement coach will soon be doing it as well? The grass ain't always greener.

Disagree with me? Try this: Lie to your boss about your work. Break the law and then lie to the police about it. See if you keep your job.

Tennessee was right when it fired Bruce Pearl for the same transgression (and over a lesser underlying violation). And I know that it's easy to carp and say, "But everyone is doing it!" And the shame of it is, if Tressel survives this, that's what the average fan can think. Because Ohio State will have shown that lying and getting caught is OK. As long as you win.

Ted Glover: Can't disagree with any of the assessments made about Tressel, and his creditability has taken a major hit. I think it's important to try and punish the individuals, and not the entire program, and if you do that then I don't think I can buy a five game suspension; it should be more. I don't think I would stomp my foot if he was suspended for the year and forced to pay a ginormous fine to a charity. Should he be fired? That's between him and the University. If I was AD Gene Smith I'd have a hard time trusting Tressel, but if this really is an isolated incident, then I can see him not getting canned. I've gone back and forth on this one, and you could talk me into either him staying or going.

Count 4 - Conspiracy: Here we are, in the midst of doing season previews, and instead we're talking about Ohio State, arguably the B1G's flagship program, being in NCAA jail. How has the OSU mess impacted the national perception of our fine conference? Is it fair that 11 other (supposedly) rule-following programs get dragged through the mud thanks to the Buckeyes? Will OSU's problems end up harming the national perception of our conference?

Hilary Lee: I think it only harms us if either of two things happen: 1. OSU wins the inaugural B1G championship game despite these violations 2. The conference as a whole has another terrible bowl season. If the first happens, it makes us look weak. If the second happens, it just reinforces the idea that we aren't a good conference unless Ohio State is good. Yuck.

Bama Hawkeye: This won't hurt the B1G one bit. How much did Alabama spending the better part of the last decade with scholarship reductions and on probation hurt the SEC? All it means is that if the NCAA comes down hard, Ohio State will win fewer Leaders Division titles. It won't diminish the value of those titles. Not in the least.

Ted Glover: Perception is reality. People that don't like Ohio State think this has been going on forever, so their perception isn't changed at all. Nationally, it's not going to hurt. No one thinks that big time programs are clean as the driven snow, anyway, so this will blow over and life will go on, and as soon as another program gets in hot water, the spotlight will focus in on them. Are TV ratings still going be be huge? Yes. Are more people going to attend B1G games again this season than in any other conference? Yes. If OSU makes the B1G Conference championship, are people NOT going to watch because of the scandal? No.