Congratulations, you've made it to the best week of the off season. It's Hawkeye Week in the Empire. Put on your black and yellow overalls and come on in.

EIGHTH IN A SERIES: THE IOWA COCKTAIL PARTY PREVIEW 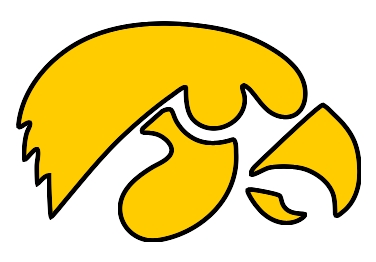 Every program, even the most successful, has a season that slips away. The years that look like they can be something special and just don't live up to the hype. For Hawkeye fans, the dates rattle off too easily. 1961. 1988. 1997. 2005. And now, they can welcome their newest addition: 2010.

With a boatload of starters returning, the nation's top returning defensive line, and a schedule with the tough games in Kinnick Stadium, Iowa seemed destined for a Big Ten title. And maybe, if things fell right, this would be the season brought Iowa a chance at a national championship. Hawkeye fans were dreaming big.

What the fans never saw in their dreams was a team losing four 4th Quarter leads on their way to a 7-5 regular season. Yes, an improbable win over #15 Mizzou in the Insight Bowl gave a nice final send off to Ricky Stanzi, Adrian Clayborn, and the rest. Make no mistake, however. The Insight was not the Arizona Bowl that the Hawkeyes were planning on.

So what now? No one is talking about Iowa. They are lumped in the mushy middle of the B1G pack - and rightfully so. 2011 will usher in a new quarterback (James Vandenberg), a new running back (Marcus Coker), a mostly new defense, and a new season-ending rival. What's the same is the head coach and his steady leadership. Sometimes, that's incredibly comforting. Sometimes, that's maddening. But through good and bad, Kirk Ferentz has spent 12 years in Iowa City without raising his voice at a reporter. 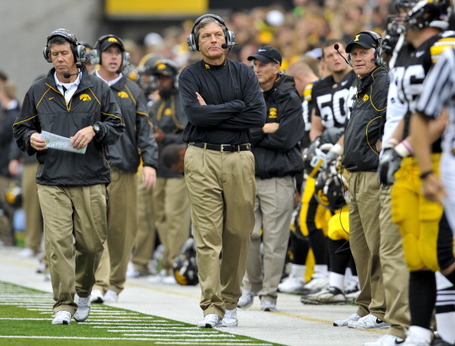 The Ferentz years at Iowa can be neatly broken into 3-year quarters.

The Hawkeyes went from a 1-10 team to a 7-5 Alamo Bowl winner in the course of these three seasons.

Iowa failed to live up to expectations, had a season with a losing record, and endured a season without a bowl game. It felt like the team had more players arrested than scoring. The talk of Kirk Ferentz as one of the country's top coaches ended. He was now described as one of the most overpaid coaches.

It was a successful quarter, as Iowa went back to a BCS Bowl, won three bowl games, knocked off an undefeated Penn State squad, and averaged over nine wins a season. And yet, each year could have been a bit better. That's the hard part when each of the 11 losses over the three seasons is by 7 points or less.

On offense, the guess is that a veteran offensive line (with five guys who have started before) is going to be key. They'll need to open holes for bruiser Marcus Coker, he of the Insight Bowl coming out party. They'll also need to give Vandenberg time as he adjusts to the demands of the starting gig. Having the tall and fast Marvin McNutt at wide receiver should help.

On defense, three of the five primary defensive linemen of 2010 were drafted. Mike Daniels and Broderick Binns remain as Seniors. If they can hold the line, the athletic, but young, linebacking corps may grow into a strength. If not, there could be a lot of long drives again - the bane of the 2010 Hawkeyes.

This is manageable. And if you're looking for a reason to believe that the Hawkeyes can sneak up on people, this is it. Iowa State will be more inexperienced than Iowa. Pittsburgh will be breaking in a new coach. In league play, the first seven games are all winnable.

However, you can also look at this schedule and envision the nightmare scenario. The Cyclones act like it's 2005. Pittsburgh is good and was just held back by the Wannstache. Whatsmore, each of the first seven games are losable. Penn State extracts revenge for the last decade. Northwestern. Dammit. Indiana almost beat Iowa each of the past two seasons. Minnesota did beat Iowa last season. Blue and Green get even for the last two years. Purdue -- who knows.

This could be a weird season though. Because no matter what happens in those first 11 weeks, it's all prologue. Welcoming Nebraska to the B1G with a Hawkeye victory could atone for almost any sin. And if that game should decide the Legends Division? Well, a Hawkeye can dream...