Today is the day that we start saying goodbye to Jim Tressel. He was the coach who finally got Ohio State over the hump. He took the Buckeyes to three National Championship games. He coached them to a stunning upset over a Miami squad that was a virtual NFL team. And yet, much like every coach of the Buckeyes over the past 50 years, he does not leave on his own terms. We'll discuss all of that later. This topic is something much smaller. 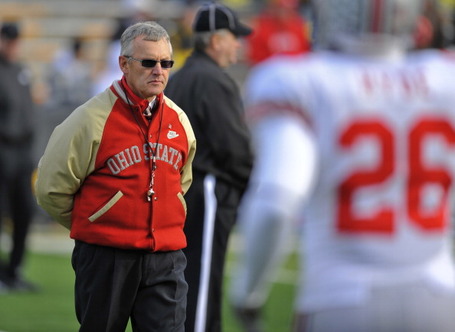 Jim Tressel before the start of Ohio State-Iowa in 2010.

What did the Vest mean to an Iowa fan? When Hawkeyes look back upon Tressel's 11 years, what will they think about? Pain mostly...

It's odd, but the first Hawkeye memory of Jim Tressel isn't of him as the conservative coach that would become his reputation. Due to the rotating byes, Iowa and Ohio State didn't play each other in Tressel's first two seasons in Columbus. No big deal in 2001. Huge deal in 2002, as Iowa managed its first undefeated Big Ten season since before the Great Depression. Sadly, Ohio State did too. That was the Ohio State team that seemed to eek out victories, doing just as much as was necessary. Hawkeye fans were hoping, praying for someone to knock off Ohio State and let Iowa to go to the Rose Bowl (Iowa's non-conference loss gave Ohio State the tiebreaker). It looked like it would be Purdue.

Holy Buckeye that sucked. Ohio State would run the table, Iowa would end up in the Orange Bowl.

Finally, Ferentz and Tressel face off. It's in Columbus. Iowa's defense was remarkable. Ohio State's was better. Add in special teams, and it's remarkable that Iowa stayed as close as they did in the 19-10 loss.

This was the only time that Iowa beat Ohio State in the Vest-era. It was a beautiful game.

Iowa held a 10-0 lead at half, worked to a 33-0 lead in the 4th Quarter, and crushed the Buckeyes in a 33-7 victory. Iowa used the win as a springboard to a dominant second half of the season and a second shared Big Ten title in three years.

One of the Iowa years that should have been. Iowa got embarrassed 31-6. Before the game, Iowa quarterback Drew Tate made comments about how he didn't see why Iowa shouldn't win this game. After all, it was the same two teams as the year before. Lee Corso, upon hearing the remark, gave a "Yo!" and said that he was inclined to pick Ohio State to win by two touchdowns, but after that, he was making it three. The Hawks couldn't even cover that spread.

Back in Kinnick Stadium, this game was under the lights on national TV.  Brent Musberger began the broadcast with, "You are looking LIVE at the largest crowd ever to watch a sporting even in the state of Iowa!"

The highlights ended there. Iowa tried to cover Ohio State slot receivers with linebackers (more on this later), and Ohio State won by three touchdowns. It didn't feel that close. The Big Ten would mercifully give Iowa another two year respite from the Buckeyes.

Before we start with this game, we should note that crushing Iowa dreams wasn't something that Ohio State had just started doing in the Tressel era. In both 1957 and 1958, Ohio State gave Iowa their only loss - likely costing the Hawkeyes (at least shares of) National Championships in both seasons. In 1985, undefeated Iowa, #1 in the country and fresh off the victory over #2 Michigan, saw their undefeated season end in Columbus. So, past was prologue for what would happen in Columbus in 2009.

Iowa and Ohio State, each with one conference loss, played for the Rose Bowl Berth. The Hawkeyes were without starting quarterback Ricky Stanzi, who had his knee destroyed by Northwestern the week before. Starting for Iowa was James Vandenburg, a red-shirt Freshman making his first career start. The general Iowa consensus: just don't let it be embarrassing. It wouldn't be. Somehow, Iowa came from 14 back in the 4th Quarter to force overtime. Yes, they would lose there, but they did more than anyone suspected that they could.

We know that this is an Iowa loss. We can suspect that in a couple of months that this will be an Ohio State loss as well. As was the pattern of the season, Iowa held a 4th Quarter lead. As was also the pattern, Iowa lost that lead. Terrelle Pryor scrambled for 14 on a 4th and 10 and then threw a beautiful pass to WR Dane Sanzenbacher, over the outmatched backup linebacker Troy Johnson. The play wasn't a surprise to Hawkeye fans. Ohio State had a good coach. One who knew how to find a weakness and how to exploit it. He did both of those things. 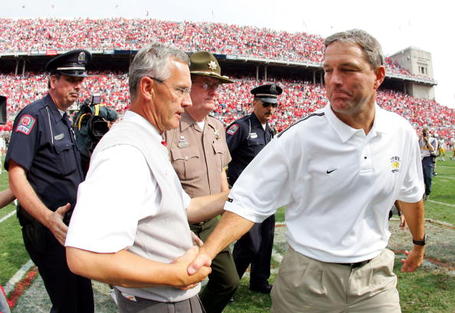 I think that's what I'll think of when I think about Jim Tressel. He was a great coach. He knew where to find advantages, and he exploited them. Now, it may well be that he thought that he also found weaknesses in NCAA compliance that he tried to exploit. That story is not done being told. No matter. I know this: over the past ten years, Ohio State was the only Big Ten school that I thought had a better coach on the sidelines than Iowa each time that they played**. I have no doubt that Ohio State will land a good coach when this is done. But, Tressel was a great one. And there are no guarantees that they'll land another one of those. Ask Oklahoma, post-Switzer. Ask Alabama, post-Stallings. Ask Florida, post-Spurrier. Ask Ohio State, post-Hayes.

** Calm down, Lions. I am not saying that Kirk Fertentz has had a better career than Joe Paterno. But, I do think that Ferentz outcoached Paterno in several of the Iowa wins.