Timing is everything. If the Big Ten had waited two years to pursue expansion, after Nebraska had already been kicked out of the AAU, would they be a Big Ten member now? Quite possibly, no. And, what if the Big Ten decided to pursue expansion after the 2007 season, as Nebraska football was humiliated (more on this later) multiple times. Would the Big Ten have been seen as having hit a home run in the process? Maybe, but it is nicer taking a team that has gone to back-to-back Big XII title games.

And it was thinking about that dark year in recent Nebraska history that made me (fondly) remember Bill Callahan. What he achieved in Lincoln was, without hyperbole, one of the worst coaching tenures in college football history. I'll go into the details below, but as we start integrating the Huskers into the conference, one of the things that we can look at is the commonalities. Nebraska is not the only school that has hired a coach that has been miserable. So, let's take a look at the six worst over the last 40 years. 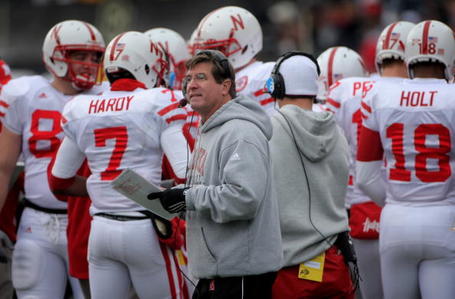 First, it has to be more than just a horrific winning percentage. Otherwise, this list would start and end in Evanston. No, to have a truly horrible tenure, you have to make a program worse than it was before you arrived. And, if your successor can demonstrate that your tenure was the miserable anomaly, all the better. There's a lot of subjectivity in this, obviously, but I feel comfortable saying that these men not only failed to bring anything to the table, they sawed off one of their program's table legs and ate it like a spare rib. On to the list...

But first, a note on Rich Rodriguez. He's not on this list. He's not close to making it, and I want to pre-but comments that he should be here. Yes, Rich Rod broke Michigan's streaks of 40 consecutive winning seasons and 34 consecutive bowl appearances. But, he's also the only coach I looked at for this list who was fired immediately after leading his team to a bowl game. You can argue back and forth as to whether RichRod deserved a fourth season in Ann Arbor. In the end, Michigan was better in his last year than in his first. And that to me, means that the tenure was not nearly as miserable as what you are about to review.

These guys were bad. Every one of them. But for whatever reason, be it winning percentage, the state of the program they inherited, or the lack of potential success at their program at that moment, they don't quite make the list.

The Jim Wacker hire made perfect sense. He had cut his teeth with great success at North Dakota State. From there, he went to Texas, where he first led Texas State to back-to-back Division II National Championships and then led TCU (and this is not the TCU of this decade) from disaster to a winning record. Connection to the Upper Midwest? Connection to Texas recruiting? Great hire. And a great big pile of failure. If four years, Wacker never made it past four wins. His predecessor won six games in four of his last six seasons. His successor got Minnesota to 8 wins in three years.

One of the great forgotten stories of the Big Ten is the success of Purdue in the late 70s and early 80s (similarly, that Jim Young is never mentioned among the best coaches in the conference is criminal). The Boilers problem was that they could never quite get over the hump to win the conference title. Jim Young's 1979 squad was one of two that has to be considered as best non-Ohio State/Michigan Big Ten team from the decade. But after 1981, Jim Young quit. Purdue had won 9, 10, and 9 games in three of Young's last four seasons. The program won 67% of its games in five years. Leon Burtnett was brought in as his successor in West Lafayette. In Burtnett's five seasons, the Boilers managed one 6 win season, and sunk to the third three-win season of his tenure in 1986. The plug was pulled. Purdue would have two more bad coaches and ten years before Joe Tiller pulled the program from the depths.

If 1979 Purdue wasn't the best non-Ohio State/Michigan team of the 1970s, than it's only because of Darryl Rogers' 1978 Spartans team that went 8-3 (7-1) and won a share of the Big Ten title (the only share between the three-way tie of 1967 and Iowa's breakthrough of 1981 to leave Columbus or Ann Arbor). Rogers spent one more year in East Lansing before moving on to Arizona State. Replacing him was a Hall of fame coach, Frank "Muddy" Waters. After leading a dominant D-II program at Hillsdale College, and literally creating the program at Saginaw Valley State, Waters finally stepped into the big time. It didn't go well. After 50 years of coaches who left Michigan State with winning tenures, Waters couldn't manage a winning season, picking up 3, 5, and 2 wins in his three years. George Perles took over in 1983, had Sparty in a bowl game in two years, and won the league in five years. From Jim Crowley in 1929 through Nick Saban in 1999, only Waters failed to achieve a winning record at Michigan State.

It's a tribute to Nebraska's history of dominance that Bill Callahan is on this list. After all, the man had a winning record at the school. He "bottomed out" at 5 wins. Here's where subjective factors have so much more to do with it. Frank Solich coached the Huskers for 6 years, and Nebraska won 9 games or more in 5 of the 6. The "down year" was a 7-7 campaign that concluded with an exciting loss to Eli Manning's Ole Miss squad in the Independence Bowl. He won a Big XII championship and coached for a BCS Title. After he was run out of town, the decision was made that the next coach would have to be able to implement a more "modern" offense. Enter Bill Callahan. Enter the first losing season since 1961 (the year before Bob Devaney took over). Exit the record 35 consecutive seasons with a bowl appearance. 2005 saw the end of the 36 game winning streak over Kansas.

Any joy from an Alamo Bowl win over Michigan and a Big 12 North Division title was obliterated in 2007. The once-proud Husker defense gave up 38 points per game. The Huskers didn't just lose. They were embarrassed. They gave up 49 points to USC. They barely escaped Ball St., 41-40. They lost by 35 to Mizzou. They lost by 31 to Oklahoma State and 22 to Texas A&M, both in Lincoln. They gave up 65 points to Colorado. But in the coup de grace, Kansas - the same batch of Jayhawks who had been rolled for the three-and-a-half decades before Callahan arrived, beat Nebraska 76-39. If it's possible, the game wasn't that close. Another five win season without a bowl game was the merciless end. The three coaches before Callahan all won 75% of their games. In the 4 years following, Bo Pelini has won 71% of his games. Yeah, Callahan had a winning record, but a lamppost could coach Nebraska and get to six wins. Of course, lampposts are generally pretty bright...

Let's be clear: the early-1970s Illini under Bob Blackmon were not world beaters. But, Illinois had established itself as a mid-pack Big Ten squad. They won five or six games in the last four years of his tenure. Blackmon was gone, and Gary Moeller and Illinois would have six wins total over next three years. How bad was it? Moeller's Illini shared the state with a school mired in one of the worst periods in college football history. Northwestern went 2-30-1 during Moeller's three years at Illinois. One of those wins and the tie came at the expense of the Illini. His successor, Mike White, would get Illinois to a winning record in two seasons and to a Rose Bowl in four. Moeller wouldn't make the Rose Bowl until he coached Michigan there after the 1991 and 1992 seasons.

Let's start with a baseline here. Between Ara Pharsegian and Pat Fitzgerald, no coach has left Northwestern with a winning record. There's been fifty years of losing records in between those two men. And if you want to argue that John Pont, Alex Agase, Dennis Green, and Francis Peay deserve to be on this list, you can make strong cases for each of them. But, what Rick Venturi accomplished deserves special mention. Northwestern had a winning record in 1971. Under John Pont, Northwestern was a bad Big Ten team. They never had a winning record, but they managed at least one Big Ten win each season. 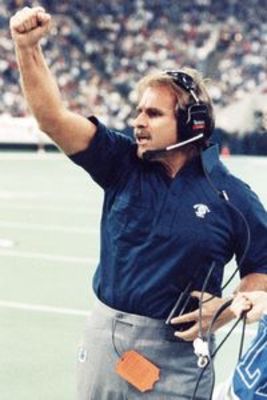 Venturi transitioned Northwestern from a bad Big Ten team to a national laughingstock. He managed a scoreless tie against Moeller's Illinois squad in his first game. He then lost 11 games. He managed a five point win over Wyoming. He lost his next 20 games (This started the still-record 34 game Wildcat losing streak.). These ildcats' (there were no Ws in Evanston) transition to a Big Ten contender in the mid-90s is all the more remarkable when you consider just how bad they were.

And what of the present? Do we have any historically bad coaches in our ranks now? If you look through the list and the mentions, you'll find that there has generally been at least one horrible coach at every point of the Big Ten's last 40 years. Are we so lucky to be absent one now? Probably not.

Let's rule some out. The successes by the current coaches at Nebraska, Iowa, Wisconsin, Penn State, Michigan State, and Northwestern (relative to their predecessors and school's respective histories) prevent them from ever making this list. I imagine that Luke Fickell will either spend a year as a caretaker and be moved along, or will be successful enough to stay in Columbus for a while. Either way, I don't suspect that he'd make this list. Ron Zook has almost matched the performance of just about every Illinois coach since Bob Zuppke. He may not be great, but he's par for Illinois.

And then there were four. Here's the thing about the new hires at Michigan, Indiana, and Minnesota. We don't know. They could turn out to be brilliant program builders. They could turn out, in each case, to be worse than their predecessor. And before you scream that it can't happen, look at the list above. Each was a new hire, who was prepared to lead their school back to glory. Just like Brady Hoke, Jerry Kill, and Kevin Wilson are. 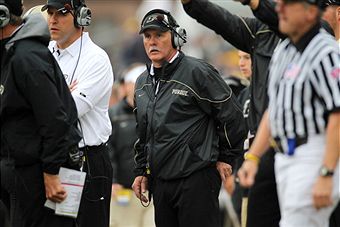 And so we look to West Lafayette. Now, I've already said that I believe that Purdue is going to get to six wins this season. But, what if they don't? What if they struggle to another 4-8 record and Danny Hope is fired with a 3 year Purdue mark of 13-23? Would he belong on this list? I think so. I think that for taking over a program that had winning seasons in 10 of 12 years and then failing to win 40% of his games, he would rank as worse than Wacker. And then you're left arguing whether Hope is worse than Burtnett - and that's only fun if you're a Hoosier.