Michigan State at a glance...

In what I suspect will become the recurring theme of the week, last year's Spartans put up an elite number of wins, but failed to convince the masses outside of East Lansing that they were something more than a feel good story.  Epic wins over Notre Dame and Wisconsin were overshadowed by embarrassing defeats at the hands of Iowa and Alabama, losses that branded Sparty as more lucky than good, at least in the minds of some.

Even the most ardent skeptics have to respect what Mark Dantonio has in his pocket heading into 2011.  Quarterback Kirk Cousins enters his third year at the helm with a 16-9 record under his belt and a school-best pass-completion percentage (64%) and efficiency rating.  There's not a quarterback in the league that has Cousins' experience behind center, and that's bound to help the Spartans down the stretch.  Combine Cousins' precision with the brute force of All-B1G running back Edwin Baker, sprinkle in two of the best guards in conference (Joel Foreman and Chris McDonald) for good measure and you've got a recipe for production.

On the other side of the ball, Michigan State boasts one of the fastest and most physical defensive lines in the league, and an opportunistic secondary that's more than put an abysmal 2009 campaign in the rear-view mirror.  The only place I'm not bullish about Sparty in 2011 is in the midfield where the loss of two-time All-American Greg Jones and his capable sidekick Eric Gordon might leave MSU vulnerable to missed tackles and yards after catches.

So the pieces are in place in East Lansing, but will Mark Dantonio's team be able to eclipse its Capital One Bowl ceiling? 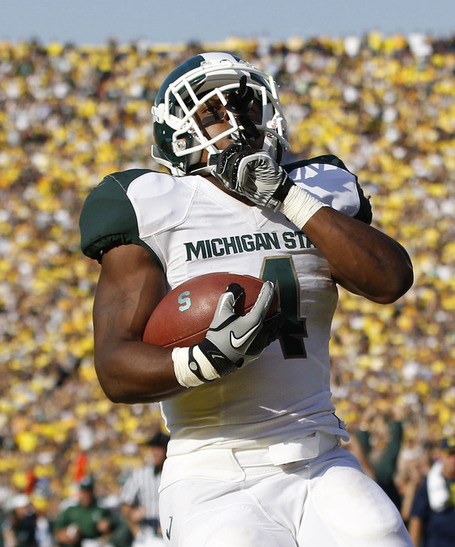 Yes and no.  Make no mistake, the Spartans will be a better, more consistent overall team in 2011 than they were in 2010.  But that still might not translate to more wins on the field.  Last year, Michigan State squeaked out to an 8-0 start with nail-biting finishes against Notre Dame and Northwestern, but they only beat one opponent that finished the season in the Top 25.

The addition of Nebraska into the Legends Division all but ensures a tougher road to travel, and Sparty has to play on the road at Notre Dame, Ohio State, against the Cornhuskers, Iowa and Northwestern.  For the second year in a row Wisconsin comes to East Lansing, which is hardly a consolation.  Meanwhile, games against Michigan and Minnesota are all but guaranteed to be tougher than they were last year.

If you can find eleven wins in that schedule, you're more optimistic than I am.  Still, Michigan State has a fighting chance at their first outright B1G Championship since 1990.

So what do you think?

In a year of turmoil, does the veteran leadership of Kirk Cousins make him the single most valuable player in the Big Ten?

Speaking of Ohio State, will MSU be favored against OSU this year for the first time in years?

Greg Jones is gone, but the Spartan Defense has depth in the secondary and big-time talent in the front seven. As far as Big Ten defenses go, is it 1) Nebraska, 2) OSU, 3) Michigan State?

In an unbelievable stretch of football games, the Spartans play OSU, Michigan, Wisky, and Nebraska in consecutive weeks. How they fare may well make or break their January bowl aspirations.