B1G 2011//Michigan State Point/Counterpoint: Step Up Or Step Back?

Share All sharing options for: B1G 2011//Michigan State Point/Counterpoint: Step Up Or Step Back?

Hi kids!  It's Point/Counterpoint Tuesday, and I think it's the most interesting one yet.  Why?  Because in many ways, Michigan State is the one team in our beloved conference that has the most clear cut 'either/or' point counter point question that needs answering.  Is MSU's 11-2 record for real, or are they a pretender?  This question started being asked sometime after the end of the regular season and before Kirk Cousins was scraped off the turf of the Capital One Bowl.  As disappointing as that game was, MSU made some significant strides in 2010, and they are poised for a breakthrough season in 2011.

Point:  Michigan State will become a perennial BCS level/B1G championship contender-type program in 2011 and beyond.  They have laid the foundation to become a consistently strong program because they have recruited well, they have a solid coaching staff, and they have learned how to win. 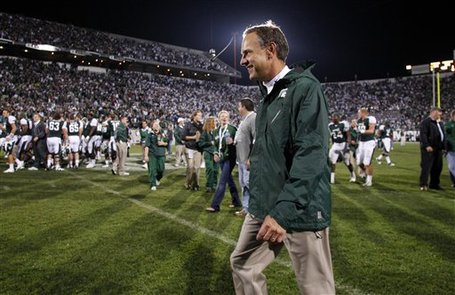 Why is this man smiling?  Because he's on the verge of taking MSU to the next level.

There is no denying that under coach Mark Dantonio, MSU has come a long way, baby.  The constant and stunning underachievement of the John L. Smith era has been been burned, buried, expunged, and eradicated, and the mental breakdowns that saw MSU losing in painful, almost comical fashion, are long gone.  Under Dantonio, MSU has become a fundamentally sound football team that doesn't beat itself, and they beat the teams they should.  As co-Big Ten champions, they were voted out of a BCS game, and MSU fans had a legitimate argument as to why they should have gone:  they beat co-champion Wisconsin, who beat the other co-champion Ohio State.  Before you can become great, you have to become consistently good, and MSU has done that.  They have solid senior leadership coming back, they have a tough but navigable schedule, they have the talent to compete on the big stage, and they can turn that Cap One debacle into a positive learning experience and motivation to silence doubters.  Said doubters called MSU's 11-2 record 'lucky', but good teams make their own luck.  Detractors point to "lucky" wins like Notre Dame and Purdue as to why Sparty still has a ways to go, but those are games MSU doesn't finish off just two or three years ago.  MSU learned how to win and close out games in 2010, and to become a BCS-level program, you have to first learn how to beat the teams you should.  Before you can run, you have to walk, and before you walk, you have to crawl.  MSU is ready to run.

Counterpoint:  C'mon, that was the most over-rated 11-2 record in college football last year.  They didn't really beat anyone except Wisconsin, and the argument that MSU should've gone to the BCS was laid to rest when Kirk Cousins was laid to rest by Alabama.  MSU will be a good, but never a consistently great program. 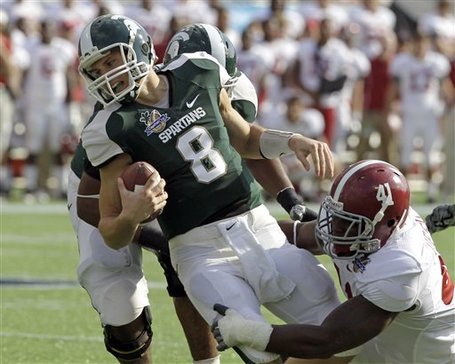 Does Sparty still have a ways to go before they are an elite program?

If you're using the crawl-walk-run model, MSU is just standing up on their own two feet and getting ready to take their first steps.  Sure, they had 11 wins, but they didn't play Ohio State, they beat a bad Michigan team, got smoked by Iowa on the road, and had no business being on the same field as Alabama.  For the most part, they had a creampuff schedule, they got the Badgers at home, and when they had to play on the road they got crushed or generally played down to the level of their competition.  Yes, Dantonio has done some good things, but his health concerns are a serious issue and that might not allow him to coach for a lot of years.  Although they have the upper hand on recruiting against Michigan, that will go away now that Rich Rodriguez is gone and the Wolverines are back recruting on the same turf Sparty is and recruiting the types of players MSU is looking for, and they got by on a lot of luck last year.  The talent they have is good, but it's not in the same league of a consistent top 10 team, and it never will be.  They had a miracle win against an average Notre Dame team, and fourth quarter victories against teams that, if they are a true BCS-level team, they should have beaten handily--Purdue and Northwestern.  And we won't even get into the Alabama debacle. The luck that carried MSU through most of 2010 won't hold this year, and they'll drop back down to their normal ceiling of 8 wins, +/-1.