Coworkers are always different. Sometimes your office is next to Erik, the angry 57 year old financial analyst who doesn't believe in showers or human communication. And sometimes you work with a 22 year old sweetheart who just happens to be an MSU cheerleader.

During this last year, I was fortunate enough to work daily with Kailey Forbes, the aforementioned Spartan. At OTE, we try and cover all aspects of Big Ten college football, so why not give the cheerleaders some air time? As part of MSU Week here on OTE, I hope you enjoy this feature article as we give Kailey the floor. Some of her discussion points:

Most unruly fanbase was in...South Bend?

Cheerleading is dangerous. Except not really, if you know what the hell you're doing.

Spartan Stadium as a football venue? A great one, especially while standing on the 50 yard line.

Hello! State your name and your connection with Big Ten football.

Hello! My name is Kailey Forbes and I cheered four years at Michigan State University on the Co-ed, Varsity team.

There are people who think cheerleading isn't a sport. What do you think?

I believe that cheerleading is just as much of a sport as any other based on the amount of physical activity included as well as the element of competition that is involved. Competitions exist for cheerleaders just like every other sport. Just like football, basketball or soccer, we have tryouts, create a routine (much like plays in football or basketball), we practice those routines to perfect our skills, and then we compete against other teams. There are winners and losers. There are good and bad teams just like in every other sport. 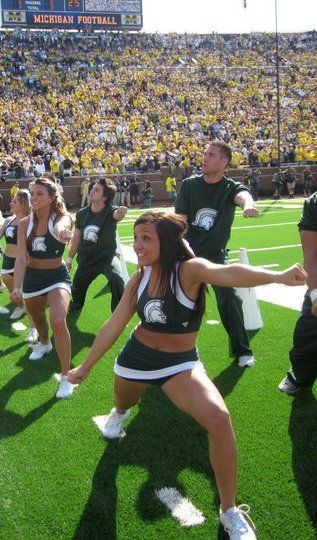 What was your motive for becoming a cheerleader at State?

I wanted to cheer at State because I love the sport of cheerleading. I wanted to continue to participate in an activity that I absolutely loved to do. Michigan State was a perfect choice to participate in a collegiate sport because of its Big Ten reputation as well as the continued traditions at the University. The alma mater, fight song, and Sparty, among many others, are a few traditional aspects of what makes Michigan State so unique.

Another reason for my participation in cheerleading at State is my love of football and the awesome fan base that Michigan State has, especially at home games. There is no better feeling than standing on the 50 yard line at Spartan Stadium as 70,000 fans roar to the sound of the team running out of the tunnel. Just being a part of Michigan State football was an amazing experience, not to mention the excitement each game presented in the last 4 years because of how well our team did.

I read somewhere that cheerleading is the most dangerous sport in America. Did your squad do any stunting or moves that us normal folk would consider dangerous? What are your thoughts on stunting and throwing 100 lb girls 20 feet in the air?

Those injuries that do occur can be more severe than other sports due to the flipping, twisting, and height factors that come into play while we do what we love. I believe that anything we do on the field or at practice would be considered dangerous to people not familiar with cheerleading because it IS dangerous. However, we are always safe. We use people to spot until we get very comfortable with the stunt, and even after we will continue to use a person to spot the more dangerous stunts we perform. I personally love to fly through the air. We have done this for so many years that it is second nature for us to stand on top of someone's hands 10 feet in the air. 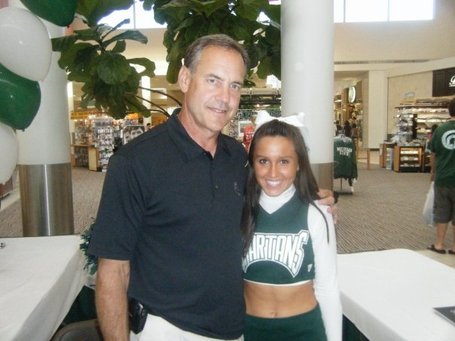 You're a cheerleader. That means you get to travel free to tons of football games. Did you enjoy cheering for State? Was there a part of the college football cheerleader experience that was particularly difficult?

Cheering for State was one of the best experiences of my life. Everything about cheerleading could be difficult, but it was the result that made all the hard work and sacrifices worth it. Cheerleading wasn't just getting to travel and cheer on the field and basketball court. It consisted of physically exhausting practices, summer conditioning, year-round commitment, marketing and fundraising events, overcoming injuries, early mornings, late nights, but mostly a lot of time. In the end, we got out of it everything that we put in.

You got to see Greg Jones, Kirk Cousins, Mark Dell, Otis Wiley, Javon Ringer...and other NFL-caliber Spartans. Was there a player who made you say...my goodness, he's a brilliant football player?

While you attended State, you went to the Capitol One Bowl twice, the Champs Sports bowl, and the Alamo Bowl in Texas. Did you have a favorite Bowl experience?

My favorite Bowl Experience was definitely the Alamo Bowl in San Antonio, Texas. We had such a large group of fans travel down to Texas which made for an exciting game. You couldn't walk anywhere in town without seeing a Michigan State fan. It felt like home. The pep rally and pre-game were on the river walk which was decorated with lights for the New Year celebration, so it was beautiful. The team was pumped for the game as were all the fans which also made for a great experience. 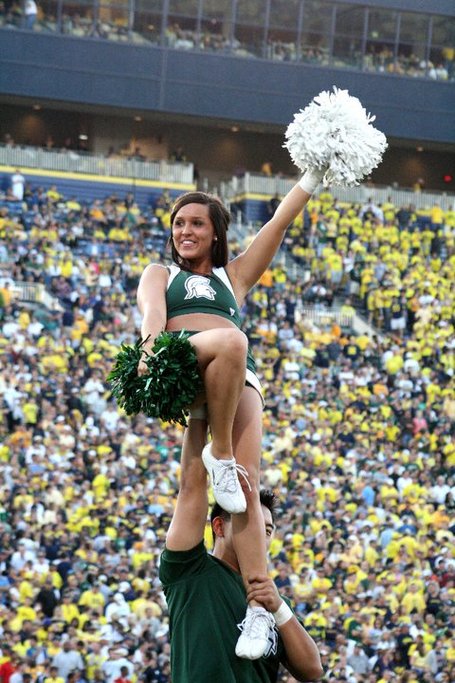 You got to play, and beat Michigan three times during your career. Tell me about cheering in Ann Arbor. Tell me what it was like to beat UM consistently.

Cheering in Ann Arbor and coming out on top 3 years in a row is a terrific feeling. There is nothing better than competing against your rival and winning, especially in their own stadium. Surprisingly, Michigan fans were not the meanest that we encountered. Even though the games are intense, I believe that it still exists to be a friendly rivalry between the two universities.

Was there one stadium in the Big Ten where you were slightly afraid to cheer or where it was especially rowdy?

Not in the Big Ten. Notre Dame fans were slightly rowdy at their home field, and not just the students but also the adults. That is the only instance in which I can remember feeling uncomfortable at an away game. Everywhere else fans were the same; some nice, some rude, but all wanting to beat us. At Notre Dame it was a little more rowdy, the Irish fans were ruthless.

Were there any other Big Ten cheerleading quads that you liked seeing perform?

Most of the Big Ten cheer teams had very different traditions and ways of cheerleading. My favorite team to watch was Penn State. They were very collegiate. 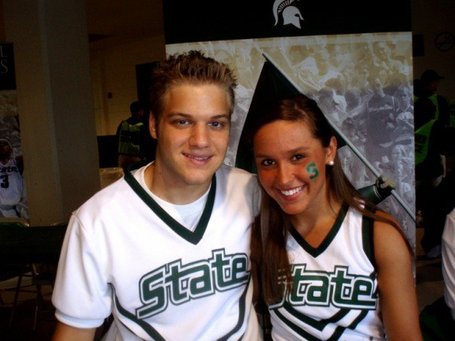 Madison, Wisconsin would be my favorite Big Ten college town besides East Lansing. I believe they had a lot of school spirit and the campus itself was pretty.

Amazing. Everything in East Lansing surrounds the campus and revolves around Michigan State. The campus is beautiful, active, and full of tradition which can be seen in our historic buildings and large smokestack in the center of the campus. Game days are the best. Everyone is up at the crack of dawn tailgating and preparing for the game. The fight song can be heard all throughout the campus. Everyone is welcome to have a great time, which is what we Spartans love to do. Go Green! Go White! 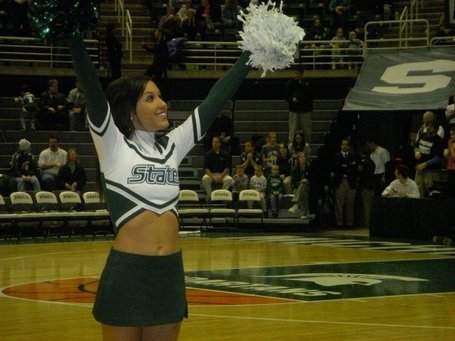