Wisconsin at a glance...

You guys! Guess what! (waits...) It's Wisconsin week on OTE! This means that, next to the week leading up to Pride, it's officially the best week, uhm, ever. After this week, it's all downhill. Definitely. No point in reading more. Nothing is ever going to match up to this.

Seriously, that's sort of how I feel about the 2010 season for the Badgers, well, at least the season pre-Rose Bowl. After a bit of a rocky start with wins against creampuffs and an ugly loss to Michigan State, Sconnie rattled off victories... some completely dominating performances as when they dropped 83 points on Indiana (perhaps one of the only times in conference history when the Wisconsin football team put more points up on an opponent than their basketball team did...), or that time when they put up nearly 600 yards of rushing on Northwestern. Others were nail biters, as with a thrilling night time victory over a then No. 1 ranked Ohio State on ESPN, or a down to the wire grudge match against Iowa that saw me turned into a verb post-game by Hawkeye fans.

For all its initial turmoil, the 2010 season for the Badgers just kept getting better and better. Going into the season, I had thought Wisconsin would be good, but I was not expecting them to be Rose Bowl bound when all was said and done. It was thrilling in a way that few seasons in recent memory have been... and then the Rose Bowl happened.

Let's not talk about that again, okay? I still have a full day of work to finish and I really would rather not be all grumpy around the office for the rest of it.

But, even the disappointment of the post season aside, 2010 was a great year for Wisconsin and a great year for me as a Badger fan. And I'm honestly not sure that the 2011 season will come close to matching it. Okay, so it is true that the turmoil at Ohio State, and to a much lesser extent Iowa, has perhaps left things open for the Badgers in a way that they weren't before, but I'm still not convinced that this year will live up to last. We'll be bowl bound, barring a sudden meteor shower on Madison, but I don't know how I feel about our BCS chances... 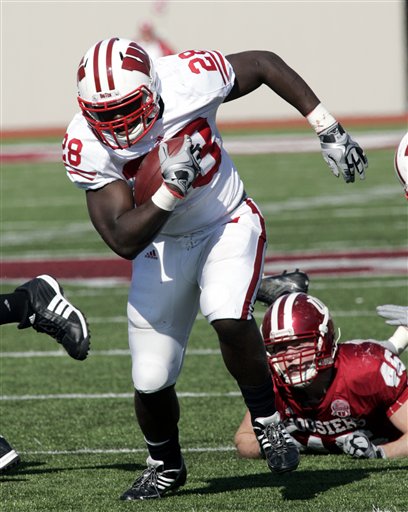 I'm not going to pull any punches on this one. Wisconsin lost a lot of important pieces in the off-season. Veteran quarterback Scott Tolzien, running back John Clay, wide receivers David Gilreath and Isaac Anderson, tight end of awesomeness Lance Kendricks, and offensive / defensive stars Gabe Carimi, John Moffitt, and J.J. Watt are all no longer with the team heading into the season.

But, fortunately for Wisconsin fans, this is an organization that has never really been short on depth. Sure, John Clay is gone, but we have James White and Montee Ball ready and waiting. As far as the receiving game goes, Nick Toon and Jacob Pedersen are still around and hopefully ready to capitalize on having greater roles in the offense. And, despite all of the major losses, the offensive line is still rated as the best in the conference by Adam Rittenberg.

And as I was writing this, the fortunes of the Badgers just changed for the better. Former NC State quarterback Russell Wilson, who had been playing in the Colorado Rockies' minor league system, has officially transferred to Wisconsin. Bucky's 5th Quarter, my favorite Wisconsin blog that is not this site, had this to say about Wilson:

Needless to say, this is a huge get for Wisconsin. Boasting a talented running game and an improved defense, the only glaring hole in Wisconsin's quest to return to the Rose Bowl was the lack of a reliable quarterback. Not only is Wilson reliable, but he is arguably one of the most talented quarterbacks to ever potentially take a snap for the Badgers.

Of course, we still don't know how well Wilson, or his competition in sophomore Jon Budmayr, will fit into the offense. But even if neither quarterback sets the world on fire, the bottom line for this team as far as player losses go is:

That's right. We don't care. We're still a stocked team, with the benefit of a consistent offensive scheme and a coach heading into his sixth year. As far as the schedule is concerned, it's certainly a tougher opening than the 2010 season. We've got non-con dates against Northern Illinois and Oregon State, in addition to UNLV and South Dakota, before opening conference play against the Huskers.

Despite the fact that I know neither the Beavers nor the Huskies will be cupcakes, I'm happy for having a bit of a challenge in the non-con before the real meat of the schedule starts. I think one of the reasons why the team dropped its first Big Ten game to MSU last year was for lack of a real challenge in their early season play. Maybe by playing better teams in the early goings we can avoid that same sort of let down. Also, the NIU game is in Soldier Field. Awesome. OTE tailgate? Why, yes, I think that would be a fantastic idea.

The rest of the schedule has some challenges like MSU and a final game against Penn State, but we do have the division benefit of seeing Indiana, Illinois, Purdue, and Minnesota all in the same season. Even if the team doesn't play as well as I hope, there's at least two wins in that group of four. That means only four others to qualify for the Pizza Pizza Bowl. 1/3 of the way there and the season hasn't even started yet!

So, I open it up to you, OTE community. Where do you see the Badgers landing this season? How big of a deal is the Russell Wilson transfer? Will they win their division, or make it back to the BCS? And, most importantly, will I be able to come up with more Badger-meme references in time for the start of my recap duties?