Share All sharing options for: B1G 2011 // Is It Time to Change the Iowa Defense?

POINT: Now, more than at any time during the 12 years of the Ferentz Era, is the right time to change Iowa's Defense

Yes, the Iowa defense has been very good, but it's built on three major theories:

3) A collegiate offense will not be able to execute enough 12 play, 75 yard drives to win a football game.

If you want to call that bend-but-don't-break, that's fair. But it's also been the logic for Iowa's performance. Here's the problem, Iowa's defense, even if it achieves the goals in point one and two, isn't the answer for the questions raised by the offenses on the 2012 schedule.

Let me make one thing clear: Norm Parker, the crusty codger who has run the Hawkeyes' defense for the past 12 years, has forgotten more about defense than I will ever know. I have complete confidence that he can change the schemes into whatever is necessary. That said, this is the year to do the changing. Gone from the schedule are Wisconsin and Ohio State - two pro-style offenses that play right into the strength of Hawkeyes defense. On the schedule: the more wide-open attacks of Nebraska, Northwestern, Minnesota, Indiana, Iowa State, and Purdue.

Iowa plays out of a 4-3 about 90% of every game. The Hawks probably average about 6 blitzes per game.  When the Hawkeyes have played spread offenses, they do something different than most other schools. Iowa lines up in its base 4-3. Instead of swapping an LB for a nickel back, they ask the LB to read the offense and drop in coverage as necessary. The benefit of the scheme is that it kept the talented Iowa defensive linemen on the field. However, at times this has led to some horrible failures (2010 Troy Johnson against Ohio State and 2007 Mike Kilinkenborg against Iowa State come to mind).

With Iowa's defensive line being a huge glaring question mark, and a young, deep, heralded group of LBs on campus, this is the time to adjust Iowa into more base 3-4 looks, and much more nickel and dime packaging. Yes, Iowa may give up a few more yards on the ground, but that won't be the primary weapon of most of Iowa's conference opponents.

It plays to team roster strength. It matches up better with the schedule. It will enable for better success against passing teams. It's time to make a change. 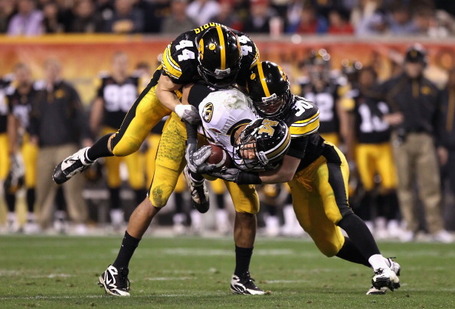 COUNTERPOINT: Iowa's Defense is just fine the way it is, thank you.

Yes, it can be exhilarating to see a blitzing outside linebacker crush a quarterback from the blindside. But you know what is better? Seeing your defense slowly suck the will to live from an opponent and keep them under 17 points. Yes, it's a transition year for the defense, with substantial personnel changes. It's college; that happens. What would be a mistake would be to lose the fundamental solidity that comes from having a team that knew everything about one defensive set.

The players will be developed. There will be growing pains, but in the traditional Parker scheme, they'll become part of a strong defense. That is guaranteed.