I don't know why I'm doing this. I'm sure that there are lots of reasons to hate Wisconsin. No, that's not strong enough. There are lots of reasons to hate Wisconsin. And I'm sure that I could get a cheap pop by taking shots at the fatties that live there (stuff like: Has anyone described to you what Madison smells like on a Sunday morning after a state full of 250 pound women have consumed nothing but beer, cheese, and sausage for 16 hours the day before?). Somehow, that doesn't seem right. Not this year. Not now. Not when I've been told my hatred is not important. 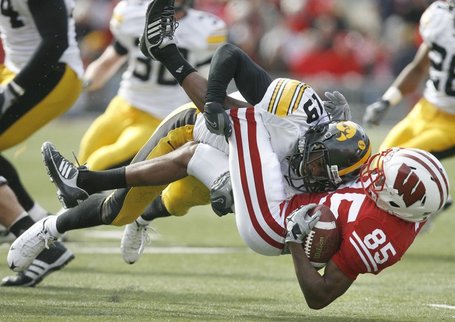 No, my hatred is muted - stifled even. And so I'm taking this in a different direction. Let me explain to you why I should be able to hate Wisconsin, and how I hope that I'm able to hate them again.

Calling Iowa and Wisconsin mirror images of each other is a popular turn of phrase. But, it doesn't do justice to how the programs got to looking so similar. Iowa and Hayden Fry broke through in 1981 by locking down their state in recruiting and making inroads into talent-rich, but at the time less-tapped by Big Ten teams, states - specifically New Jersey, Florida and Texas. Iowa would go to 3 Rose Bowls in next ten years. After Fry retired, Iowa hired Kirk Ferentz, one of Fry's former assistants, who followed the same pattern and led Iowa to two B1G titles and two BCS Bowls.

Wisconsin didn't make the same progress that Iowa did. It wasn't like watching two twins grow up together. It was more like watching an episode of I Want a Famous Face. Wisconsin sculpted itself in Iowa's image. It hired Barry Alvarez, Hayden Fry's defensive coordinator, as coach. It started focusing its recruiting in places like Texas and Florida (and even picked up a Heisman winner out of New Jersey). When Alvarez decided to step down, Bret Bielema was named his successor. He had, of course, played football at Iowa and was an assistant there. His leg tells an interesting story. He's led Wisconsin to one B1G title and 1 BCS game. Congratulations, Wisconsin. You're a Big Ten crown and a Caucus away from becoming Iowa. 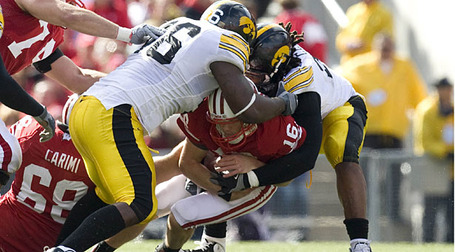 But, here's the thing. Regardless of how the Badgers eventually rose from their putridity, they have done it. They have reached the point of being Iowa's equal. And that's what makes me mad. That's what I hate right now. This is a fantastic series, and it was shat upon by the B1G. Iowa and Wisconsin won't meet in 2011. They won't meet in 2012. And that's a travesty.

Do you realize how close Iowa City and Madison are? The teams don't fly. It's a 3 hour drive, with the state line serving as the halfway mark. For Iowa, there is no closer B1G foe. For Wisconsin, only Northwestern is comparable. Proximity has bred contempt. Don't believe me? Grab a pitcher at the Annex in Platteville, Wisconsin. Cross the river and have another at the Walnut Tap in Dubuque. You'll learn.

There is no series in the league that is more even than this one. In fact, after playing each other 86 times, the tally is tied at 42-42-2. If we only go back as far as 1993, which the B1G told us is the magical start of all B1G related history, the series is tied at 8-8.  The games have been great, too. Ron Dayne set the rushing record against Iowa in 1999. In 2004, Iowa and Wisconsin played with the Big Ten Title on the line. The Hawks won a beautiful game. the past two years have been absolute slug-fests. Iowa rallied to win in Madison on their run to a BCS berth in 2009. Wisconsin returned the favor in Iowa City in 2010.

You can't say any of that about Minnesota, who Iowa has bested 13 of 18 times and Wisconsin has beaten 14 of 18 times since 1993. And yet, when the divisions were configured, the league made sure that Iowa-Minnesota and Wisconsin-Minnesota were annual games. The league's priorities were misplaced.

You may have noticed, that the Hawks and Badgers were two games short in their series over the last 18 years. That's because the B1G made this same mistake before. When the league added Penn State in 1993, the league dropped the annual meeting between the schools. They protested, and the league set up the two-permanent rival system. Apparently, that lesson has been forgotten.

So now Iowa and Wisconsin take two years off. They'll play in 2013-14, and then they'll take four years off. And the pattern will continue. The rivalry will die, remembered only for what it was in two year spurts. My hatred irrelevant.

From this seat, there appears only one shot at saving this rivalry. If the B1G does go to a nine game league schedule, this game should be added as a second permanent cross-division opponent (with PSU-MSU, OSU-NW, Purd-MN, Indiana-Nebraska, Illinois-Mich - giving each team one opponent from the top and bottom three of the other division). Do that, B1G, and you'll right this wrong. And then I can focus this hate upon Wisconsin. Until then, it's aimed at your Chicago headquarters.