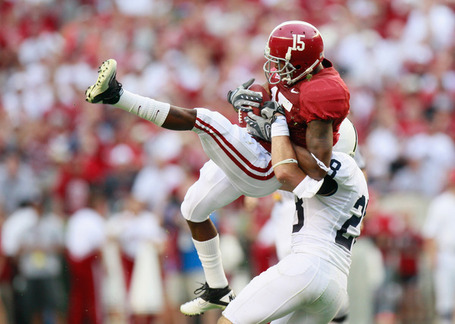 After three days of making educated guesses about where teams will end up when the dust settles and how each program compares to its B1G brethren, victory lap week marches on with a look at the most anticipated intra and inter conference matchups of 2011.

Last year, Minnesota played USC tough for three quarters before collapsing in a typical Tim Brewster-coached fashion. I'm excited to see what a Jerry Kill coached Gopher team will do against top competition, and if the Gophers play USC tough, or God forbid win the game, it may portend an impending turnaround for the Gophers program.

All of your favorite sports cliches apply here: we'll see how this team has improved, we'll see what this team is made of, it will be a huge test for Kill and his staff, the Gophers have had all off-season to prepare for this, etc. USC came into The Bank last season and made enough mistakes to let the Gophers keep it close for about 2 1/2 quarters, but Brewster's squad was out-talented, out-worked and out-coached in the end. This year, USC is sanctioned up the wazoo, and cannot go to a bowl game, so the regular season is all they have to play for. They might come out firing. USC will certainly be favored in this game, and I'm not into moral victories, but if the Gophers can go into hostile Southern Cal territory and make a game of it, it just might be the kind of building block Kill's troops need.

Sept 10: Alabama at Penn State.  Penn State played Alabama tough in Tuscaloosa last year, and I will be interested to see how Penn State does at home.  Happy Valley will be electric, and if Penn State can actually hold on to the ball and eliminate mental mistakes once they cross the 50, they've got a shot.  A win by the Nittany Lions would be huge for them, and big for the conference. 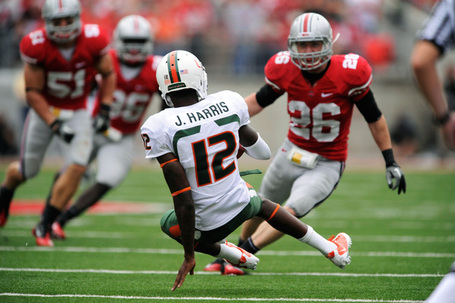 Sanctions be damned, this is Luke Fickell's first test. Ohio State heads into Miami on prime time to take on the Hurricanes. I don't know what to expect of the crowd; it's Miami, not a land grant school with a state-wide following. And I don't know who the hell Ohio State starts at quarterback. What I do know is Al Golden breathes defense and Miami brings back a veteran offensive line. If Sweater Vest was still patrolling the sidelines and looking the other way, I'd take Ohio State and the points. With Fickell... let's see.

When 50 Cent and Busta dropped a hit piece "Hail Mary" song on Ja Rule (ended Ja's career), 50 says something which sticks in my head;

So applicable here. It's the first actual challenge since the Buckeye administrators and players tried to submarine the program. Who is the quarterback? What if a medium-level ACC team beats up on the Big Ten's perennial power?

Once again Ohio State is the B1G's flagship program, only this time the Buckeyes are in the spotlight for the wrong reasons.  I don't think there's a better litmus indicator of what kind of a season the scarlet and gray are in for than this early road test against a talented, but undisciplined Hurricane squad.  Do me a favor: drop the 2002 National Championship meme.  That was fodder for last year's contest.  This time around it's two troubled but storied programs battling for national respect.  Miami is one mediocre season away from being the Notre Dame of the South.  Ohio State is one high profile loss away from officially entering rebuilding mode.  Whoever claws their way to a win will buy a little more time in the court of public opinion.

Here's the strange thing, while the Buckeye in me wants this win badly to prove that the program is bigger than any one person, deep down I think this one ends up looking a lot like Ohio State/USC 2009.  Lots of hype and prime billing, followed by a 60 minute stalemate in which both sides play more not to lose than to win.  Lots of praise heaped on the winner, only for the nation to later discover it was watching two 8-4 teams have it out.

The non-conference game I'm most looking forward to is Arizona State visiting Illinois. Seriously. Yes, it's cool when Notre Dame plays a Big Ten team. The jumbled mess of Ohio State taking their tattoos to South Beach is a fun night as well. But, the Illini and Sun Devils may say more about the strength of the respective conferences than any other game. Arizona State may be the best bet to make the Pac-12 Championship Game from the South Division. Illinois was a dramatically improved team last year, but is expected to be mid-pack at best in 2011. If Illinois wins this one, they may 1) establish that the Big 10 is that far ahead of the Pac-12 and 2) that Wisconsin has another hard game on its schedule. I have low expectations for the Illini this year, but a win here would go a long way to changing my mind.

Wisconsin is being touted as a BCS Title Game team, and it will be Nebraska's first B1G conference game.  It's going to be historic, epic, and red.  Very, very red.  For Wisconsin, Russell Wilson faces his first real defense, and for Taylor Martinez, it begins a gauntlet we call the B1G.  Can he hold up?  If he can, I think it could very well be a preview of the inagural Conference Championship Game in Indianapolis.

In the first week, nonetheless. 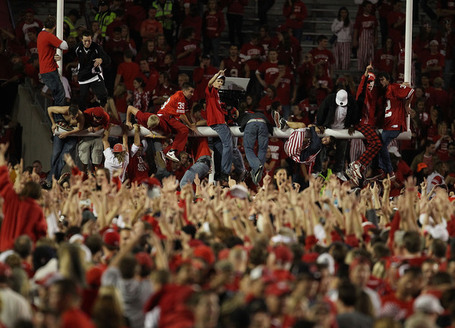 Will the Camp claim another victim?

I'm cheating, but only a little bit, on this one. I'm excited for the three-way death match among Iowa, Northwestern, and Penn State. Iowa's dominance of Penn State and failures against Northwestern have been well documented. But adding in Penn State's complete handling of Northwestern makes for a lovely A > B; B > C; but C > A scenario that can happen in sports, even if it can't in math class. Add in that all three teams look to be about 8-win squads, and you have the making for three competitive games that could follow form or break the norm. If one of these teams sweeps the other two, it could be the sign of a special year.

Normally it would be easy for me to say that I was most looking forward to the battle for Floyd of Rosedale vs Iowa. That game has traditionally fallen on the last Saturday of the season for both teams, allowing plenty of drama and hatred to build up. But with the new B1G scheduling, it will this year be played in October. The game will be no less hate-filled, but will probably be slightly less dramatic. In light of this, the conference game I'm most looking forward to is the Gophers first tilt with new B1G member Nebraska, and the Cornhuskers first ever trip to The Bank on October 22. This also happens to be the first conference game at TCF Bank Stadium in 2011. Heading into this game the Gophers will have played their entire non-conference schedule, and will have been tested against Michigan and Purdue on the road. We should have a decent idea of what to expect out of Minnesota by this point, and the Cornhuskers will undoubtedly provide a major test at home for Kill's squad.

Leave aside for the moment there may very well be a division title on the line. And that this might just turn into one of the better conference rivalries. Two things here pique my interest. One, it's the Friday after Thanksgiving, meaning forcing myself to watch this game will prove the perfect tonic to a tryptophan-induced coma. Two, I can't wait to see what condition Nebraska is in for this game after playing so many years in that other big conference. The Huskers open up at Wisconsin, then turn right back around to host the Buckeyes in Lincoln. After hosting a Dantonio-coached team that likes hitting mid-way through the conference slate, Nebraska finishes up the season at Penn State (smashmouth), at Michigan (while bleaching the floors in an effort to remove all the RichRod stains, my guess is Hoke and Mattison will have people playing a wee bit tougher this season), and then they get the Hawkeyes at home. After running a gauntlet featuring fewer passive aggressive passing offenses, I'd be interested to see how well Jared Crick, Lavonte David, and the other Blackshirts are after dealing, week after week, with offensive linemen that actually fire off the ball. On the other side, will T-Magic still be alive come T-Day? 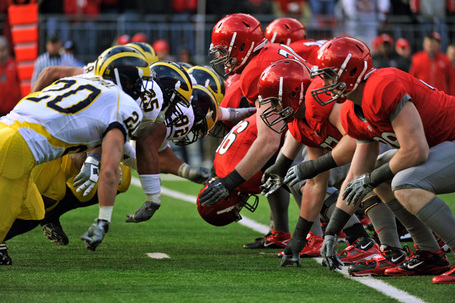 The populist in me wanted to pick Michigan State @ Nebraska on October 29th, since nobody picked Sparty for anything and we're not exactly muy simpatico with Spartan fans at the moment.  [Editor's Note: Wait a few weeks faithful Michigan State readers.  You're in for a very pleasant surprise.]  But I've got to be honest, I think the best thing to come out of this terrible, horrible, no good, very bad offseason is a refreshing change in perspective in Columbus.  Call me old school, but I have to admit I miss the days when The Game meant everything.  When the entire Goddamn season was on the line and you started feeling butterflies as you filed out of the Shoe the week before.  No, I'm not talking about 2006.  I'm talking about 2001.  Back when we played a 1-game season.

Don't get me wrong, I've had a blast traveling to BCS Bowl Games, and I love the fact that (at least until this year) Ohio State has largely had bigger fish to fry.  But let's face it, there's something cleansing about the demise of nose bleed expectations.  There's something pure about getting back to basics.

So I'm grateful for this one thing.  That our visit to Ann Arbor might be our last game of the season.  That a Michigan fanbase I was actually starting to feel sorry for is finally back on its feet.  That both coaches will enter this year's game with a blank slate.  That if we go 1-11 I'll be okay with it -- as long at that lone win is over those bastards.

OSU is reeling, Michigan seems to have their mojo back, and this could be the year that Michigan stops the OSU winning streak, vacated wins aside.  The OSU scandal couldn't have come at a worse time for the Buckeyes, as the Ohio recruiting class of 2012 is touted as one of the best ever...and Brady Hoke is picking them off, one by one.  We'll know where both teams are by the time The Game rolls around, and whether or not OSU's time at the top of the mountain has come and gone.