Share All sharing options for: B1G 2011//Four And Out: Looking At The B1G Non-Conference Schedule, Week 1

Last year, the B1G non-conference schedule was considered weak and watered down. Never mind that Penn State travelled to Tuscaloosa, Miami visited Columbus, USC came to Minneapolis, Illinois met MIzzou in St. Louis, and Notre Dame had their annual run through the conference.

No, last season's non-conference schedule was remembered for the week 4 MAC-rifice, where every B1G team played a sacrificial lamb from the Mid America Conference, or the equally impressive Northern Colorado or Austin Peay. Just for the record, a Jerry Kill-coached Northern Illinois team wouldn't cooperate, and they beat the hapless Flying Brewsters.

There are no MAC-rifice weeks this year, and each week has at least two games that will help tell us where the B1G teams stand as they head down the path to conference play, and for two of them, the championship game in Indianapolis. From bottom to top, we'll look at each non-conference game that matters to the B1G, and tell you what a win or a loss means. 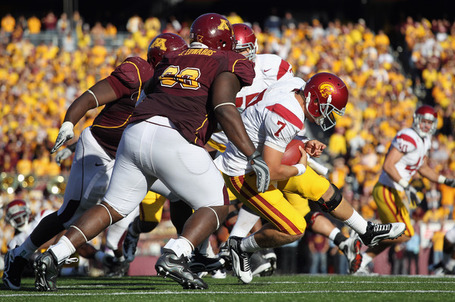 To have a chance, Minnesota will have to do a lot of this.

Minnesota at USC: The first three weeks of the non-conference schedule sees a B1G team matched up against a marquee program every week, and Minnesota-USC is the first one. Do I think Minnesota is going to win? No, and I don't think most reasonable Gopher fans feel that way. But they are excited about Jerry Kill's new no-nonsense attitude, and they are excited to see what QB MarQueis Gray can do. I don't see the Gophers pulling off the upset, but I do see them playing it close and being a fundamentally sound football team. And I think, at least for right now, that will be enough to keep Gopher fans excited. 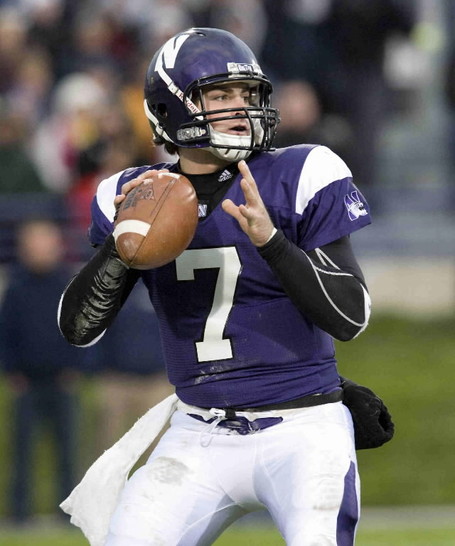 Having Dan Persa back helps, but will the defense be better?

Northwestern at Boston College: If Northwestern wants to be considered a legitimate player for the Legends Division, they need to win tough non-conference games like this. Dan Persa should be ready, and that will be a tremendous help, but Boston College is a pretty good team. BC struggled offensively in 2010, but they have a stout defense that has seven returning starters. RB Montel Harris could give the Wildcats fits, and the Northwestern defense must show improvement if they are to take the next step. This will be a good first test for the Wildcats, and if BC puts a lot of points on the board, it could portend another season of good offense/bad defense/7 or 8 win ceiling. 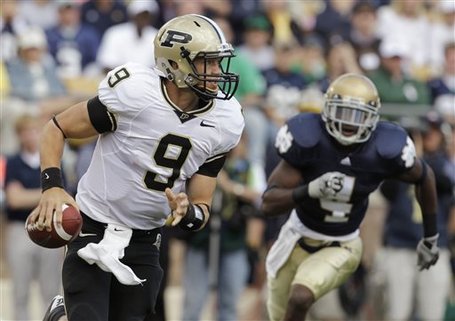 This is Robert Marve not hurt. This means Purdue should be better.

Purdue at Middle Tennessee State: This is an important game for Purdue. No one is really giving the Boilermakers much of a chance this year because no one really knows what to expect, to be honest. But that opinion has been formed primarily because of last season, which is a pretty unfair yardstick from which to be judged, as they lost key players on both sides of the ball to injuries. At one point, it seemed they had to pull guys from intramural flag football teams to play quarterback and running back. Middle Tennessee State is a mid-major bowl team that will be a good test for Purdue, and if everyone is healthy, it's a game they should win. Get a win here, and Purdue can get some momentum and continuity as they head towards Notre Dame in a few weeks, but a loss? It could be Purdue's worst fears realized, and might be the beginning of the end of the Danny Hope era.

Oh, and no pressure Purdue, but Tim Brewster managed to beat MTSU on the road last year. Just sayin'...