Share All sharing options for: B1G 2011//Four And Out: Looking At The B1G Non-Conference Schedule, Week 2

Week one is going to be awesome just for the fact that football will be back, in all of it's glory, and that will be good enough for most of us. And although there are some good matchups that will give us an early marker on what to expect from some teams, week 2 has five...count 'em....five games that will really shape the perception of the conference. Week one will probably be set by Northwestern and how they play against Boston College, but that will be trumped if Minnesota were to somehow pull off the major upset at USC. Assuming the Gophers don't pull the upset, week 2 will probably do more to cement the conference perception than anything else, at least until bowl season.

Let's look at the key games from week 2, after the jump. 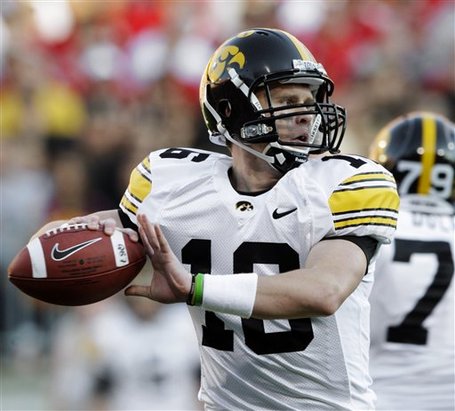 He won't be as patriotic, but can he be as good as Ricki Stanzi?

Iowa at Iowa State: This is a big game for Iowa, because for whatever reason, Iowa State tends to play the Hawkeyes tough. Although the Hawkeyes have won the last two by blowouts, and have won four of the last five, most of these games contests have been closer than they should have been, quite frankly. Iowa is a better team, and they should win this game by a comfortable margin. But the Hawkeyes have to replace the largest senior class in team history, and gone are some key players, to include Ricki Stanzi, Adrian Clayborn, and Darrell Johnson-Koulianos. This will be the first real test for all the new faces, and I'll be interested to see how James Vandenberg looks. 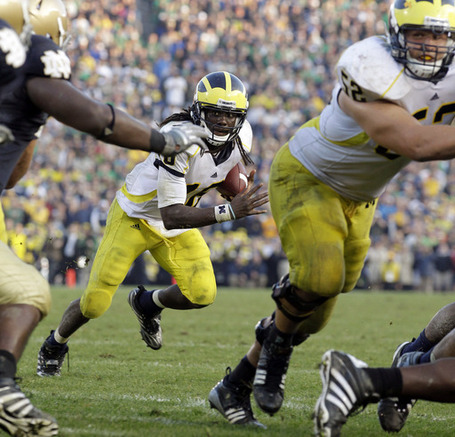 Can he destroy Notre Dame again this year?

Notre Dame at Michigan: This is the first opportunity to see if the the little Hokesters have been eating their vegetables and taking their vitamins, brother. Brady Hoke has the Michigan faithful fired up, and for good reason. They are back to recruiting well, and in Ohio, and Hoke is in the process of getting Michigan back to playing Michigan football, and that's a pro set offense and a live, honest to God defense that stops people. But to do that, he'll have to do a bit of a square peg in a round hole with Denard Robinson, and Robinson struggled during spring ball. He's still a dynamic athlete, but he must stay healthy. For the defense, they'll struggle, but I think they'll be better just because GERG and the 3-3-5 is gone. Notre Dame is in a similar situation that Michigan finds itself. The Irish struggled early last year with Brian Kelly's spread, but won 5 of their last 7, and beat Miami in the Hyundai Sun Bowl. With a year in the system, and some key players back, this season might be the best chance Notre Dame has to go to a BCS game in over five years. I'm really looking forward to this game. 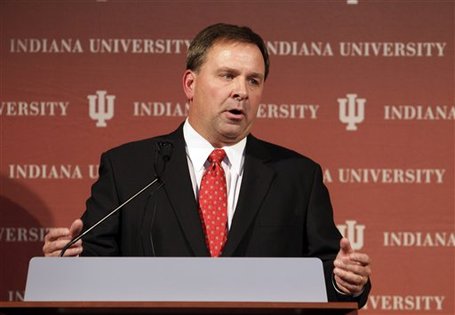 Kevin Wilson will try to turn it around

Virginia at Indiana: These are very evenly matched programs, both finishing under .500 and near the bottom of their respective BCS conference. Virginia coach Mike London comes from a background that includes the NFL and a national championship as the head coach of the FCS Richmond Spiders. Kevin WIlson comes to Bloomington as the former offensive coordinator for powerhouse Oklahoma, and they are both trying to turn around a culture of mediocrity. Although Virginia saw some success under former coach Al Groh, they have dropped badly since a 9 win 2007 season, and bottomed out in 2009. Kevin Wilson has a long ways to go with the Hoosiers, and a win here would be a big first step. 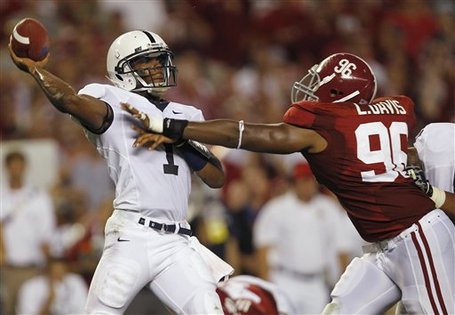 Eliminate red zone mistakes, and it could be happy times in Happy Valley

Alabama at Penn State: I think this game is the biggest non-conference game for the B1G in 2011. Last year in Tuscaloosa, Penn State hung tough with Alabama for three quarters, and but for some untimely turnovers, played a winnable game. Their defense was good, and freshman Robert Bolden moved the ball well, but threw back-breaking interceptions deep in Alabama territory three times, killing any chance the Nittany Lions had for an upset. I think this game will be a lot better, as Penn State's defense will still be good, Bolden will be better (JoePa really isn't going to start Matt McGloin, is he?) and PSU has a real shot to get a victory in front of over 100,000 of their closest friends. 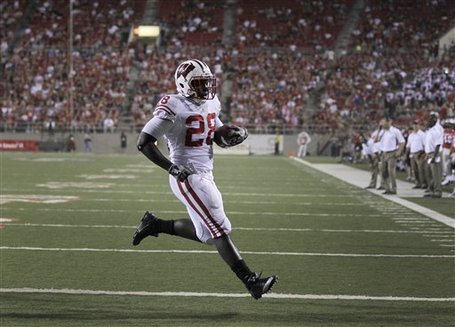 Oregon State at Wisconsin: Maybe it's just me, but it seems that every year Wisconsin struggles at home, at least once, against a team they should just abuse like a $5 hooker. Oh, wait...that's because they do. Arizona State, Fresno State, Cal Poly, the Citadel. Cal Poly and the Citadel, really? With the addition of Russell WIlson, Bucky has the buzz about them of a team that could run the table and play in the National Championship game. If they want to be taken seriously, teams like that in games like this need to handled. Granted, Wisconsin just abused several teams last year once they got on a roll, but a slip up early will probably end their shot at the BCS National Championship. Mike Tice's kid better be playing by halftime.