Was Yesterday the Biggest Day in College Football Since June 12, 2010?

Share All sharing options for: Was Yesterday the Biggest Day in College Football Since June 12, 2010? 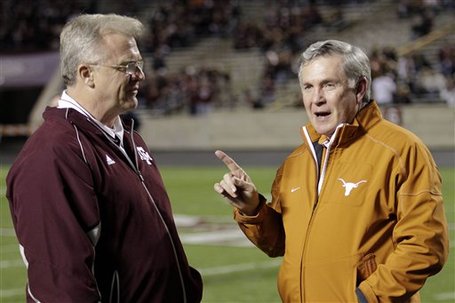 If you, like me, are the kind of college football fan that lives for seismic rumors and potential paradigm shifts Wednesday had a little bit of everything.  Just how big was it?

Let me put it this way, one of the two most powerful men in the sport -- Southeastern Conference Commissioner Mike Silve -- took the stage at his conference's annual media days, unveiled a dramatic plan for national reform, and that barely cracks my Top 4 list of crazy things that went down Wednesday.

You're probably wondering what the other three are.  They're the kind of developments you might have missed if you blinked.  But that doesn't make their potential impact any less dramatic.  Hold onto your hats, friends.  The next few months just might be one very wild ride.

Yes, i'm talking about the same Louisiana State program that just got put on 1-year probation, lost two scholarships, and 10-percent of its recruiting visits for an assistant coach's cover up of housing and transportation benefits for a visiting recruit.

Less than a day after that story broke, the Tigers are again under the gun after ESPN's Outside the Lines discovered 32 recruiting DVDs sent to the school by everyone's favorite talent scout Will Lyles had little practical value.  As ESPN describes it the videos contained "highlights of players who already were playing Division I football at other programs and poor-quality, full-game shoots that did not isolate or identify any players at all."

Sound familiar?  That's only slightly better than the shoddy after-the-fact cut and paste dossiers Lyles rushed to Oregon after its payment of five-times the going rate for a recruiting package raised red flags last month.

So did a talented con-artist pull the wool over the eyes of two of the most sophisticated athletic departments in the country?  It's possible.  But it's far more likely that both programs got the benefit of their bargain: access to blue chip recruits.

While the sheer amount of dough Oregon shelled out for Lyles' "services" and the fact that it landed a 5-star recruit who just happened to be living under Lyles' roof makes it look way more culpable, don't underestimate LSU's potential problem.

And did I mention LSU just got put on probation?

Much to Gene Chizik's chagrin, the NCAA is still actively investigating an alleged pay-for-play deal that allegedly brought Heisman-Trophy-winner Cam Newton, and for that matter, a national championship to Auburn.

Today we learned that the Association's rhetoric might not be all symbolic.  USA Today oddsmaker Danny Sheridan announced on Paul Finebaum's radio show that the NCAA thinks it has its man, or more specifically, a hot lead on how things went down.  As Team Speed Kills summarizes:

All we can do now is sit back and see if this leak has the intended effect of getting the guy to confess. If he does do that, watch out. Newton's eligibility for the last season will be gone, Auburn's 14 wins will take a permanent vacation, and the Heisman trust will likely vacate his trophy just as it did with Reggie Bush. And that will only be the start.

To be clear, no one is suggesting that anyone inside Auburn knew of the transaction.  But if the money came from a booster, it's lights out on the plains. 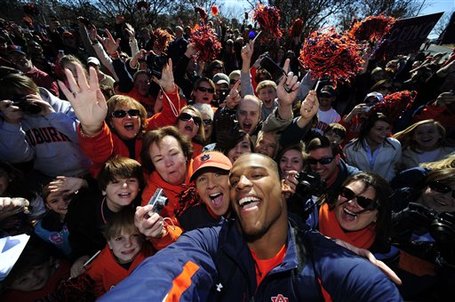 Will the NCAA have the last laugh?

Texas A&M and Oklahoma to the SEC?

Sure, it feels a bit like last year's news.  But the dormant wheels of expansion got a major jolt earlier this week when an ominous item surfaced on the Texas A&M Board of Regents' agenda.  It's no secret that Texas' eleventh hour decision to stay in the conference last summer saved the Big 12 from certain death.  But it's also not a stretch to say that the Longhorn's antics left a bad taste in the mouths of its remaining conference brethren.  UT Athletic Director Deloss Dodds added more fuel to the fire earlier this year when the school announced a 20-year $300 million partnership with ESPN to create the nation's first school-specific network.

But it's not just the money that's making rival schools grumble.  It's the fact that Texas plans to televise high-school football games, featuring prospective UT recruits, as well as at least one conference game.

The only thing worse than stealing a guy's girlfriend at a bar is sticking him with the tab at the end of the night.  That's essentially what UT will do by requiring some unlucky school's fanbase to subscribe to the Longhorn network for the privilege of seeing their team play the Horns.  But that's just the tip of the iceberg.  Outspoken officials at Texas A&M and Oklahoma fear that the Longhorn Network will give Texas a major recruiting advantage.

The only chip the minnows have to play?  Defection to the SEC.

To be sure, Texas appears to be backpedaling pretty quickly.  But there are still plenty of reasons for the Aggies and Sooners to depart to greener pastures.

Ultimately, I think this is just a well-orchestrated bluff on the part of the A&M administration.  After all, any defection would kill the Big 12 and would leave schools like Missouri, Kansas, Kansas State, Oklahoma State, Iowa State, Texas Tech and Baylor out to dry.  It would also all but guarantee the beginning of the superconference era, something I don't think any one school wants on its conscience.

Still, you've got to admit, the Big 12 continues to look like one f-ed up marriage.  And as Abraham Lincoln so aptly put it, a house divided against itself cannot stand.