Share All sharing options for: No One Is Right 100 Percent of the Time - Thoughts on the Ohio State Case 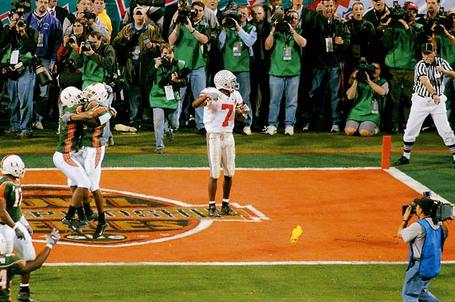 It's 2003.  No. 1 Miami leads No. 2 Ohio State 24-17 in overtime.  The Buckeyes face a 4th and 3 on the Hurricanes' five yard line.  Craig Krenzel puts a quick throw into the corner of the endzone for intended target Chris Gamble, but the pass falls incomplete.  The Hurricanes rush the field, but wait -- there's a flag on the play...

Not since that controversial pass interference call in the 2002 BCS National Championship Game has Ohio State football dodged a bullet like it did on Thursday when the NCAA delivered a letter to the University that stated investigators did not find additional evidence of wrongdoing, failure to monitor, or lack of institutional control.

What's that mean for the Buckeyes? They're about to stand trial for simple battery instead of a homicide.

That's a breath of fresh air for Buckeye nation and a nightmare for journalists who have spent the past four months on a witch-hunt in Columbus.  You're going to read a lot over the coming weeks and months about the NCAA's toothlessness.  Some of it is probably going to be warranted.  But before you pick up a torch and a pitchfork, remember the following:

1. When it comes to investigations, no one is right 100% of the time, including George Dohrmann

On Memorial Day, George Dohrmann triumphantly took to Twitter and all but declared that he (and his soon to be published Sports Illustrated story) were the catalyst for Jim Tressel's resignation.  Most of us feared that the other shoe was about to drop.  Fortunately, the hysteria was short lived.

I read the article twice, and couldn't help thinking "That's it?"  It turns out the NCAA was unimpressed as well, since they investigated each and every one of his claims and found no additional evidence of wrongdoing.

Dohrmann blamed his big whiff on the NCAA's refusal to grant confidentiality to his source even though they could have.  In other words he wants us to believe that an agency already handicapped by the absence of a subpoena power voluntarily gave up its best lead on its highest profile case.  That's like a prosecutor abandoning his chance to take down a drug cartel because his star witness asks to be admitted to the witness protection program.

But the bigger injustice is Dohrmann's stubborn insistence that his story remains 100% percent accurate after the NCAA's follow up.  That's because even if the NCAA couldn't get Dohrmann's source to talk, they still could have and did sit down with players like Storm Klein who were accused of wrongdoing.  Klein's case in particular is an important chink in Dohrmann's armor, since his article claimed the linebacker traded memorabilia for tattoos, and Klein's father answered by stating that he has all of his son's memorabilia and that his son doesn't have any tattoos.

The NCAA could have, and almost certainly did get to the bottom of the Klein accusation.  How?  By asking to see the memorabilia and checking the kid for tattoos.  It's not rocket science.

If the NCAA did what it was readily capable of with respect to Storm Klein and it found nothing, then Dohrmann's article cannot be 100% accurate.

2. Ohio State is not out of the woods yet

Sure, things are looking up in Columbus, but let's not forget that the light at the end of the tunnel still could be an oncoming freight train.  As many commentators have suggested, the NCAA can always supplement its findings to add failure to monitor or lack of institutional control charges after the August 12th hearing date.

Similarly, the NCAA can still choose to severely sanction Ohio State as a repeat offender.

So the Buckeyes aren't out of the woods yet.

3. Having said that, based on what we know now, the punishment fits the crime

If you don't live in Columbus you probably chuckled when you read the extent of Ohio State's self-imposed sanctions.  No bowl ban, no scholarship reductions?  That's a joke, right?

Too many people are confusing the University's questionable public relations over the last four months with the actual "crimes" committed by Jim Tressel and the football program.  We're not talking about points shaving, academic fraud, drug trafficking, violence, performance-enhancing drug use, or pay-for-play.  We're talking about players who sold memorabilia for benefits.  Admirable?  No.  But it's not exactly the kind of thing that deserves society's solemn moral condemnation.

The biggest mistake made by anyone in the Woody Hayes Athletic Center was Jim Tressel's decision to lie to University compliance officials and the NCAA.

Jim Tressel will probably never coach another game because of that.  As for the program's punishment, Eleven Warriors says it best:

It's laughable that so many are saying Ohio State is going to get off easy because the casualties of this episode are real: the departure of Ohio State's greatest coach in a generation, the early exit of a quarterback that had two BCS bowl game MVPs under his belt, five game suspensions for a half dozen key contributors for selling personal property (all totaling less than $15,000), a once-in-a-lifetime streak of Big Ten championships surrendered off the field and last but not least, the specter of hearing about how we have yet to beat an SEC team in a bowl game again.

Based on what we, and the NCAA, knows right now, Ohio State's self-imposed sanctions are hardly a symbolic slap on the wrist.  I still think that the Association will add somewhere in the range of 6-12 scholarship reductions.  Anything more, without evidence of additional violations, would be just plain vengeful.

And only the media appears to be in that business...