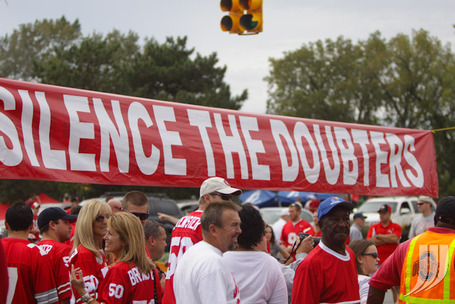 In 1821, the Caledonian Mercury wrote of the British Empire, "On her dominions the sun never sets."  It's a quote I might have used to paraphrase this preview had I been writing it in late-February.  Since then, of course, the gray sky over Columbus has fallen. James Patrick Tressel, a coach who most regard as one of the top two in the program's history is gone.  Lost in his wake is the highest profile quarterback in modern Buckeye history as well as the stability that carried Ohio State football to eight BCS bowls and three national championship games.

Read that sentence again.  It's representative of what the scarlet became in the Aughts.

[Conversation pointer courtesy of Scout.com: The Buckeyes have gone to six straight BCS games, won 66 games over those six years, and won the 2010 Rose Bowl and the 2011 Sugar Bowl. During that span they lost 11 games and just two of them – 2009 losses to USC and Purdue – came to teams that didn’t end up in BCS games. Even more impressively, starting with the 2002 national title win over Miami, they got a BCS invite in eight of the last nine seasons.

How big of a monster has Ohio State football been on the field? Over the last 23 years there have been just two losses to teams that finished the season with a losing record, and 1988 was the last time OSU finished a season with fewer than seven wins.]

But the bigger they are, the harder they fall.  Or do they?  While an entire nation of vultures circles Columbus, a team led by an inexperienced head coach and quarterback prepares to silence the doubters.  At least that's what the banner hanging in the weight room at the Woody Hayes Athletic Center proclaims.

To be sure, there are bigger questions raised by Tattoo-gate and its fallout.  Was Jim Tressel a fraud?  Should players be allowed to sell personal memorabilia for profit?  Is everyone doing it, and were the Buckeyes just unlucky enough to get caught?

In many ways the situation in Columbus is a referendum on intercollegiate athletic governance.  But we're not here to talk about that today.  We're here to talk about football, and for that I say thank God.  On September 3rd eleven players will take the field to represent the 122nd incarnation of the Buckeyes.  The deck will be as stacked against them as its ever been.  Nevertheless, from the first whistle, they'll play.  For loyalty.  For spirit.  For courage.  For grandeur.  For strength.  For Ohio.

Ohio State at a glance...

There's no question that for better or worse Ohio State has been the Big Ten's poster child for almost a decade.  Jim Tressel's teams followed a predictable and devastatingly effective formula to national success.  Efficient offenses and opportunistic defenses bullied conference opponents up and down the field.  Under the blunt emblem of "Tresselball," Buckeye teams played smart, fundamentally sound football, and leveraged turnovers and field position into double digit leads that were virtually insurmountable.

What Tressel-teams lacked in style, they made up for in smarts.  It didn't hurt that Tressel built a wall around the state, funneling talented after talented crops of recruits to the capital, where they kept the cogs of a well-oiled machine humming.  At the same time, Jimmy T made great inroads nationally, farming Florida and other talent hotbeds for speed.

In many ways, 2001 to 2010 was a golden era in Columbus.  But like all great dynasties, all good things must end.  The leadership is gone.  The seniority is suspended.  In its place is a pantheon of uncertainty.

2011 was supposed to be a final hurrah for one of the most talented senior classes in Ohio State history.  Instead, first-year Head Coach Luke Fickell will try to maintain momentum with four starters suspended for the first five games, and a giant question mark at quarterback.

The unenviable task of following persona non grata Terrelle Pryor who compiled an impressive 31-4 record as a starter in three seasons in Columbus will almost certainly fall to either senior Joe Bauserman or freshman Braxton Miller.

Bauserman is the safe choice.  He backed up Pryor for the last three seasons, and knows the offense as well as anyone.  But Bauserman's 72 percent completion percentage and 160 passer rating in 2010 was built largely in a mop up capacity.  The timid, awkward signal caller lacks virtually everything that made Pryor successful in Columbus and fans are still scarred by a mediocre performance at Illinois last year when Pryor was temporarily sidelined. 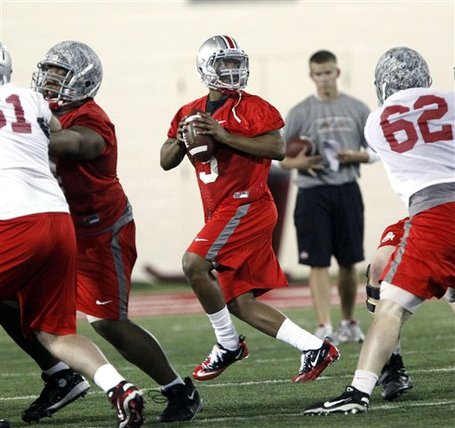 Will Braxton Miller be only the third freshman in the history of the program to lead the Buckeyes?

Miller is the people's choice.  The phenom freshman was already the heir apparent to Pryor when he was recruited in the mold of the classic dual-threat signal caller.  There's little question that Miller is the future of the program -- his spring game performance cemented that -- but it remains to be seen whether Fickell will stake his job on a trial by fire baptism of a freshman quarterback, who is bound to experience growing pains as he transitions into the college game.  Miller may not have Pryor's unique combination of size and speed, but his arm is at least as good as Pryor's, and his wheels would certainly keep opposing defenses honest.

Lost in the quandary of quarterback questions is the fact that the Buckeyes still have an embarrassment of riches at running back.  Before Dan Herron returns from suspension in game six at Nebraska, the Buckeyes will spread carries between Jordan Hall and Jammal Berry -- both highly touted recruits who are equal parts force and finesse.  Don't expect to see Fickell depart from the tried and true "three yards and a cloud of dust" mentality that has helped the Buckeye attack wear opposing defenses down for four decades.

Also overlooked in the cloud of skepticism is the fact that the Buckeyes boast arguably the nation's best center in Michael Brewster.  Brewster will anchor a line that will miss the immediate impact of Mike Adams, but still should hold its own in Big Ten play.

That's on the ground.  In the air, Jim Bollman's unit will struggle to find experienced hands to reel in passes.  Until senior DeVier Posey returns from suspension they'll be a noticeable lack of go-to receivers.  Expect Ohio State to mitigate the damage by relying on short passes out of the backfield to running backs -- the specialty of first-year receivers coach Stan Drayton, who hails from Florida.

On the other side of the ball, the "Silver Bullets" won't be nearly as polished as they've been in recent seasons, especially at linebacker where Jim Heacock's crew will have to replace tackling laureates Brian Rolle and Ross Homan.  Still, junior Etienne Sabino will be a welcome addition in the midfield after a redshirt season and the appropriately named Storm Kline and veteran Andrew Sweat should hold down the fort.  The wild card here is junior Tyler Moeller, whose speed and ferocity thrilled fans in 2010 before he was sidelined with a torn pectoral muscle.  Moeller's intensity is a much needed tonic for a defense that needs to find its voice early. 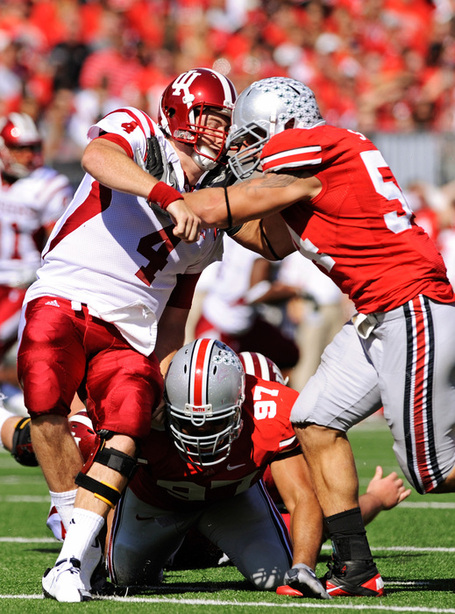 The defensive line is also ravaged by graduations and suspensions.  Still, the Buckeyes have at least one ace in the hole in John Simon -- the star defensive tackle who should move to defensive end to help support the unit's trademark pass rush.  Sophomore DT Johnathan Hankins is also no slouch, and opponents who expect to see a soft front four might find themselves sorely mistaken.

Junior Orhian Johnson is the gem of the secondary, and will likely set the tone at strong safety.  His presence will alleviate the pressure on the corners, but cornerback remains the defenses' most noticeable weakness.

The early conference schedule won't do the Buckeyes any favors with an October 1st visit from Michigan State and October 8th trip to Nebraska, both Legends Division favorites, but if the Buckeyes can find their identity early -- especially on the road in Miami -- they're capable of squeezing in another solid season before the NCAA hammer drops.