Hayden Fry is a Hall of Fame coach. Barry Alvarez is a Hall of Fame coach. Someday, Jim Tressel may be a Hall of fame coach. But in the last thirty years of Big Ten football, there have only been two legends. One is in Pennsylvania. The other is Bo Schembechler. After 21 years, 13 conference titles, 17 bowl games (sidenote: in the four years that Michigan did not go to a bowl, they never lost more than one game in a season), and 20 seasons ranked in the Top 20, Bo called it a career. Of course, he went out on top of the league. 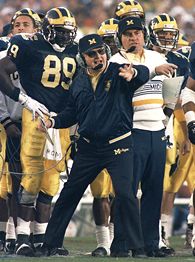 And of course, he lost in the Rose Bowl.