It's the state motto of Wisconsin. For the better part of the school's history, it had nothing to do with the football program. It wasn't until Barry Alvarez arrived that the school actually started moving in that direction. Forward. Darrell Bevell became the first of the interchangeable, faceless, game-managing quarterbacks that led the squad. Brett Moss and Terrell Fletcher headed the pounding running game that would be the school's trademark for the next eighteen years. The defense was stout. It was a very good team. It even upset UCLA in the Rose Bowl. 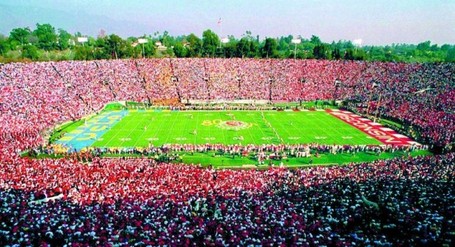 Notice all the blue and gold in the stands? The Badgers traveled well.

It also didn't win the title outright. Ohio State and Wisconsin finished at 6-1-1, tying each other and losing to rivals Michigan and Minnesota. But these two squads didn't make the biggest splash in the Big Ten in 1993.

That was the new kid. Forty seasons after Michigan State joined the league, the Big Ten finally expanded. Penn State played its first Big Ten game against Minnesota; it won. It finished at 6-2 in the league in its first season. Compared to some of prognostications picking Penn State to run over the entire the league, the finish was a bit disappointing. But, bigger and better things were coming very soon. And the league kept moving Forward.