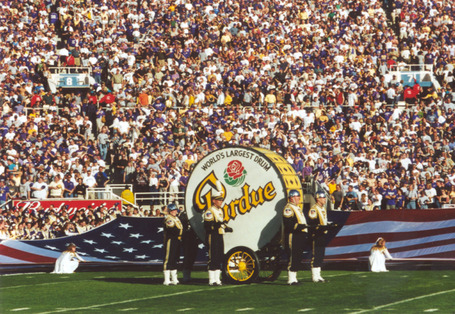 Some years are just messy. This was one of them. Purdue, Northwestern, and Michigan all went 6-2 in the league. What was weird about this multi-team tie, was that the conference didn't have to go deep into the tiebreakers to sort out the mess. Purdue beat Michigan. It pounded Northwestern in Evanston. So who did the Boilers lose to? There was a two point loss to Penn State. And then, an inexplicable 20 point loss at 5-6 Michigan State. It was a head-scratcher then. It still is today.

That paragraph sound familiar? It was virtually a carbon-copy of the crazy 1990 season's article. In both year's, the Michigan/Ohio State winner was going to earn a share of the title. Both times it ended up being Michigan. Both years had teams with the chance to claim the title outright, and then just blowing it. The same day that Purdue was failing in East Lansing, Northwestern lost to 3-9 Iowa. If the Cats win there, they go back to Pasadena. Instead, Purdue made its second-ever trip, and first since 1966. They lost to #4 Washington (won shared the Pac-10 title in a three-way tie with both Oregon schools), but Joe Tiller's "basketball on grass" had given the school a relevance that it hadn't had in 20 years.