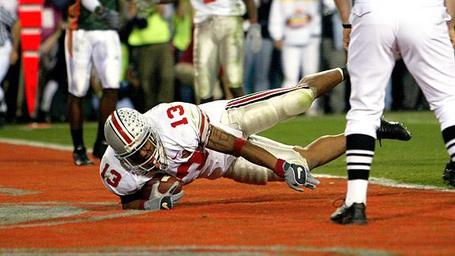 How rare was 2002 in the Big Ten? Since the advent of six game conference schedules (1936 for most teams), only once before had two teams gone unbeaten and untied in league play. Comparing them, I'll take the talent on 2002 Ohio State and Iowa over that from war-depleted 1943 Purdue and Michigan.

Ohio State, which was also perfect in the non-con, went to the Fiesta Bowl, defeated Miami, and won the school's first national championship since 1968. Iowa, which dropped a home game to Iowa State, went to the Orange Bowl and lost to Pac-10 runner-up USC. What always amazed me about 2002, was how one team was so close to derailing BOTH perfect seasons. Do you remember?

On October 5, 2002, Purdue went to Kinnick Stadium and had the Hawkeyes on the ropes. Iowa managed a few huge plays. Purdue controlled the rest of the game and led 28-24 in the final minutes. At the conclusion of a long drive, Iowa faced 4th and Goal from the 7. Dallas Clark feigned blocking, slid across the line, and found himself wide open for Brad Banks's perfect pass. Iowa wins 31-28.

On November 9, 2002, Purdue hosted Ohio State. Quite frankly, it was an ugly game. With less than two minutes to play, Purdue led 6-3. Ohio State faced a 4th and 1at the Purdue 37. Purdue brought nine in the box. Holy Buckeye, Craig Krentzel threw over the top to Michael Jenkins for a 37 yard touchdown (55 second mark in video). Ohio State wins 10-6.

And, just like that, Purdue's inability to stop two fourth down plays, resulted in two unbeaten squads and a shared title.