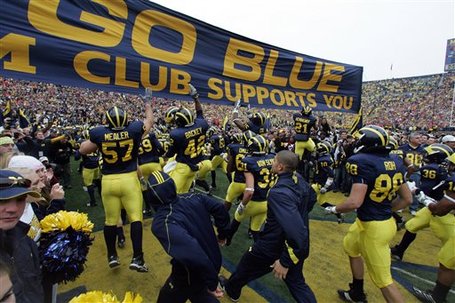 "So this is a Harvard bar? I thought there'd be equations on the wall and shit." - Good Will Hunting

Hey guys, remember Coach Rodriguez? The Coach Rod who made a very impressive showing on OTE, wearing shorts? Well 2010 was everything critics of Coach Rod could ever have wanted to see. An explosive offense, Top 10 nationally in many categories...derailed thanks to injuries and overuse of Rocket Robinson. A wounded and out of place defense...trying to play a scheme that was just the worst.damn.thing.I.have.ever.seen. So let's answer some fun questions:

Who's the new coach? Brady Hoke

What kind of offense will Michigan be running? Some kind of pro-form, with Robinson under center much more than last year. Similar blocking schemes (the O-Line will be a strength and have mentioned they are comfortable in the new offense), except the coaches would like the offense to stay on the field much longer...

What does the UM fanbase think? Tired of defensive/special teams/player development/PR ineptitude, Michigan turned (or was forced to turn) to Hoke, who has impressed everyone with his recruitment of Midwest-located defensive players and his good ol' football coach attitude. Let's put it this way - Michigan football, for years and years and years, was built on superior athletes who played tough and smart. Were Michigan teams too conservative sometimes? Yes, but that's better than being flashy and undersized and injury-prone like 2010.

Ladies and Gentlemen of the Jury, Michigan is returning to its roots. The *Maize and Blue have been stockpiling defensive recruits, the offense will pound downhill, and the 4-3 formation that led the nation in run defense in 2005 returns. Unfortunately, times done changed. All things that used to make Michigan Michigan are pretty much no longer advantages. Stable coaching staffs? Look at Iowa, look at "stoic" Dantonio. Big tough defenses? Nebraska, Ohio State...So there is much work to be done.

Good Will Hunting is all about expectations. Will expects Skylar to dump him because he's got no money.Gerald Lambeau expects everyone to focus on career success, just like he does. Chuckie expects Harvard bars to have equations on the wall and shit.
Michigan football is all about expectations. Changed expectations. Where a top 15 national finish used to be the normal expectation, now the fanbase just wants to see improvement across the board, any kind of improvement. Where the fans expected to see veteran starters pepper the defensive rotation, now we just hope for a return to solid form tackling. (True story: I went to see Miami upset NIU at Ford Field last year and after a quarter, I turned to Jon and said: "Something's different here, I can't tell what it is." I figured it during the 2nd quarter - the Miami defenders actually were in position to make plays and tackled the ballcarrier. Such was the difference of watching Miami and Michigan in 2010.

Offense: B+...broke down late in the season, over utilized Denard, but still put up huge numbers 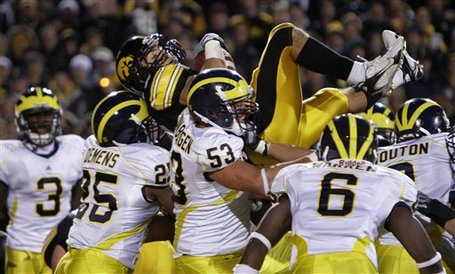 ...that Denard Robinson is still arguably the most dangerous player in the B1G. Being in a pro-form doesn't mute him.

...that all the Michigan defenders are experienced and put on substantial amounts of weight. Mike Martin should be All-B1G and Kenny Demens is ready to be the next Jarrett Irons/Sam Sword (i.e. good sized solid as shit Michigan linebacker).

...that Greg Mattison's 4-3 cannot, just cannot be worse than whatever Greg Robinson was trying to do. The 3-3-5 linemen were being blown off the ball and moved easily in 2010. At least this year we'll have four people on the line on every snap.

...that the schedule isn't exactly manageable. 4 ranked opponents, Iowa and NW away, an early must-win against SDSU. It ain't cake.

Basically everyone expects losses to Iowa, ND, and Nebraska. The surprise? Half of our writers see a win over the Buckeyes. Is Michigan the Big Ten's wildest card? Probably. No one quite believes in that defense, but hey, it is Michigan after all.