In another race that came down to the last week, Michigan had a shot at claiming an outright crown. All they needed was to win in Columbus, against what was likely the weakest team of Jim Tressel's tenure. They couldn't do it, falling 37-21. With the loss, the winner of Wisconsin at Iowa, which kicked off as the Michigan loss concluded, would claim a share of the crown. If the Badgers won, they would head to Pasadena. A Hawkeye win would send Michigan. After a tight first half, Iowa's defense suffocated any semblance of a Wisconsin offense, holding the Badgers to 41 rushing yards on 30 attempts, in the 30-7 Hawkeye win. 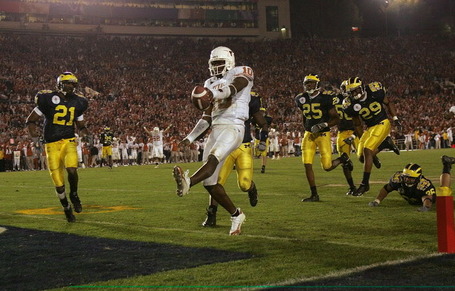 Michigan faced Texas, with USC drafted into the Orange Bowl against Oklahoma (Vacated. USC didn't go there after all), and lost a great game on a last second field goal. Iowa drew defending champion LSU in the Capital One Bowl, and won on a last second touchdown pass. Played back-to-back, these games made for an outstanding New Year's Day.