You've got to think that this one hurt pretty badly. Maybe not as badly as the 1979 Sugar Bowl loss to Alabama, but among the 135 losses that Joe Paterno has coached, where would this one rank? Second worst? Third?

Undefeated Penn State was #3 in the polls. In their three previous weeks, they had slain the Michigan dragon, beaten defending Big Ten champ Ohio State, and enjoyed a bye week to rest and get healthy. A road trip to Iowa and home dates with Indiana and Michigan State were all that remained between the Lions and a perfect season. And while we didn't know it for certain at the time, three wins would have also sent them to the BCS Title game in Miami. 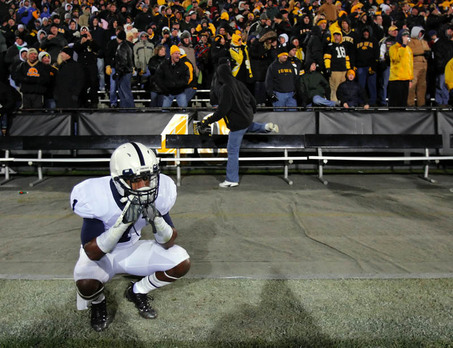 11-1 (7-1) Penn State would lose badly in the Rose Bowl to USC. 10-2 (7-1) Ohio State would lose in the Fiesta Bowl to Texas. The Big Ten went 1-6 in their bowl games, with double digit losses by Penn State, Wisconsin, Minnesota, and Michigan State. At this point, the meme had become presumed fact. The Big Ten just couldn't cut it against the speed and talent of the rest of the country.