We're working with the Marines to preview Big Ten QB's. Today, we look towards conference depth at the signalcaller position and the soon to be controversial Purdue QB situation. Please enjoy, good sirs and ladies. 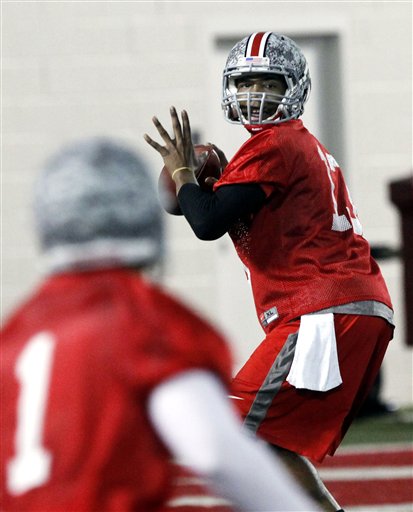 IS THIS THE STRONGEST CONTINGENT OF B1G QB'S EVER?

At first glance, I was inclined to say, why yes, yes it is. But then I looked at my ratings below and...I'm not so sure anymore.

Mah / Who Knows?: Whoever starts at PSU, Indiana, and OSU

See what I'm saying? I would take last year's combination of Pryor, Tolzien, Stanzi, Robinson, Persa, Cousins, Scheelhaase, Chappell (who was pretty good for being at Indiana), and Weber (who threw a good ball) over the 2011 crop.

And don't tell me this is an irrelevant discussion. B1G football was 300 times more exciting last year because almost every single team featured an effective passing game that they could turn to if the run game was halted. Having an uber accurate slanger like Tolzien opened up lanes for White, Clay, and Ball all year. Remember that MSU comeback at Ryan Field? Only possible with the big arm of Cousins whipping spirals into the wind. Scheelhaase's emergence as a cool and calm leader probably saved Ron Zook's job.

WHAT DO WE MAKE OF THE PURDUE QB BATTLE?

Sometimes it's good to have a clear cut starter, in fact, it's almost always good to have a clear cut starter. Why? IMO that allows roles to be defined. If someone doesn't know where they stand, it opens up the floodgates for argument and indecisiveness on the field and between coaches. So....I guess we should discuss Purdue's situation first. From BoilerTMill, he of Hammer and Rails fame, comes this analysis -

Our situation boils down to Rob Henry vs. Robert Marve. Henry is, of course, the promising sophomore that showed some growth over the course of the season last year. Marve is the star-crossed guy with a lot of talent, but has one last chance to fulfill it with a twice-repaired knee. Danny Hope has said both will play at times, and he even mentioned Caleb TerBush as a guy that can play.

Technically we have five quarterbacks on the roster with playing time at Purdue and four with starts:

Henry:  Started most of last year. He's a redshirt sophomore.

Justin Siller: Three starts at QB in 2008 and one last year where he last one play. He is a wide receiver now, but had some promise as a QB before missing 2009 with an academic suspension and most of 2010 with an injury. he played one play during the Big Ten season last year.

Caleb TerBush: Is a redshirt junior that has one game of experience: mop-up time in a 37-0 loss at Wisconsin in 2009. Missed all of last year due to academics.

Sean Robinson: He's a promising true sophomore that would have redshirted last year, but he had to play (and even start vs. Wisconsin and Illinois) because of injuries to Siller, Marve, and Henry plus TerBush's suspension. He will very likely be #4 this year and redshirt unless he is needed.

I think Henry is the future and will emerge as the starter, but I cannot help but feel for Marve. He is a solid passer and I don't think he was ever truly healthy last season. He will get a shot mostly on potential, but he has played one complete game without injury since 2008 with Miami. That was at Notre Dame last year. He left the Western Illinois and Ball State games with minor injuries last year and re-tore his ACL against Toledo.

Personally, I think we should settle on one guy, be it Henry or Marve. Henry is a great runner and needs to hone his passing game if he is the future, but he took big steps forward last year. Marve has never been able to showcase his talents. he was stuck in a QB rotation at Miami and it looks like he is again here.

If Purdue continues to be Mr. Irrelevant in the B1G race, I'm not sure so many people will give a damn about this intriguing quarterback battle. But if the Boilers can pull an upset or two, this becomes a very interesting position battle.