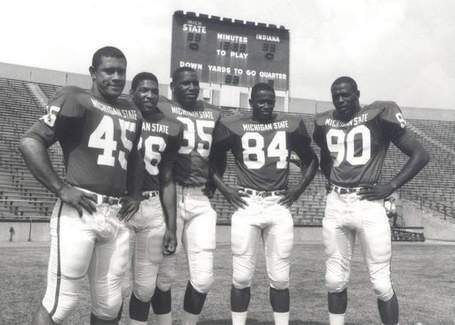 We all know what happened last year for the Spartans 11-2 (7-1) B1G co-champs*, hopefully the last shared championship in B1G history. A case could be made that Michigan State University received the short end of the stick when bowl selections were made, but bowl selections are as much for what you have done as for what you did in a season. The horror show for MSU faithful that was the Capital One Bowl left Spartan fans little room to argue that the wrong teams were picked for the Rose and Sugar Bowls. I might suggest that no team in America was beating an angry Alabama team stocked with talent including four future NFL first round draft picks that had four weeks to prepare, but it really doesn't matter. We are fans, we are sure of what is right and what is true and what matters. The MSU football team was overmatched and it underwhelmed on its biggest stage of the 2010 season.

Ladies and Gentlemen of the jury, I could spend time conjuring up a case based on fancy statistics explaining why I have great confidence in MSU at the dawn of a new era of B1G football, instead I offer the following information:

A senior QB who is a three year starter and captain.

Three running backs who would receive significant carries on most teams in the B1G, one of whom it has been suggested will play on Sundays.

Skill position players (WR/TE) touted as the deepest in the B1G.

A defensive line anchored by an NFL prospect who is joined 6-7 280 DE/LB that has a cousin who does used to play on Sundays.

A line backing corps that lost one of the greatest LBs in Spartan history, but his replacement is a player who was literally bred to wear green and play linebacker as his father (LB), grandfather and two uncles(LB) played for MSU. His grandfather (MSU/Green Bay) and uncle (UCLA) coached the position.

I don't point to this bevy of riches to suggest that the Spartans are invincible. They are not. There are significant questions on the offensive line but the 2010 version of the O-line introduced three new starters as well, and we saw them jell into an effective unit by the end of the season. I am also certain that each team in the B1G can point to positions of experience, strength, talent, lineage and potential to reach the next level. I am merely highlighting ours.

If you are at work or have a delicate constitution, please turn down your volume.

Coffee or in our case BCS Bowl Games are for closers. In four instances that I measure as opportunities for MSU to make a statement and prove that they belong on the national stage and in the top ranks of the polls they have stumbled.

This is an emotional plea. It is not a rational or maybe even realistic one. If you are interested in a rational or realistic prediction I can point you toward plenty of websites or glossy publications. This isn't even an emotional plea to my colleagues who have reached their verdicts before hearing my arguments, nor to the visitors to this site, who are fans in their own right and are sure of what is right and what is true.

My emotional plea is to the Michigan State football team itself. It has been suggested that MSU may actually have a better team this year, but wind up with a worse record. Great football minds speculate that the gauntlet of games at Notre Dame, at Ohio State, at Nebraska and at Iowa will prove simply too much to handle. That these games will in effect break MSU's season. Good teams split those games. Great teams win three out of four of those games. Memorable teams sweep that slate.

All of the staff here at the OTE have MSU reaching bowl eligibility for the fifth season in a row (although Ricardo sees the East Lansing letter-men as just barely eligible). Staff picks average out to a 9-3 (5-3 B1G) season for MSU. Besides Bama, I am the only one who sees MSU besting Nebraska. I am the only one who envisions the Spartans as the Legends division's initial representative in the B1G championship game. I am probably one of the few people on the planet not institutionalized who see MSU winning the inaugural B1G championship game. I could have made a safely bland prediction of 8-4 with an Insight Bowl win against whatever equally mediocre Big XII team they match us up with; where is the fun in that? Great risk yields great reward. If I'm wrong. I'm wrong. On the internet.

* After OSU vacated the season, you can decide for yourself how many co-champs there in fact were in 2010.

**Ted appears to have some issues with math or else he thought MSU would just take an extra week off.