Share All sharing options for: The B1G Five - Evaluating Big Ten Teams in the Preseason Top 25 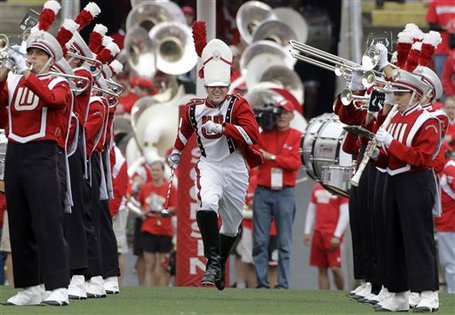 Those of you who have been around for a while know my feelings about preseason polls.  (My anti-poll manifesto is here in case you'd like a refresher.)  Nevertheless, these pre-season popularity contests aren't going away anytime soon -- and as it turns out, I root for a team that greatly benefits from the status quo -- so my new mentality is simple: if you can't beat 'em, join 'em.

Fear not friends.  I'm not about to unveil another Top 25.  All I want to do is take a look at where B1G teams landed, for better or worse.

So the B1G placed 5 teams in the Preseason Coaches Poll that was released Thursday by USA Today.  That's tied with the Big 12 for second best of any conference.  Any guesses about who had the most?  I'll let our friends at Team Speed Kills tell you:

Here is the breakdown by conference:

Oh, you wanted something less arbitrary.  Okay, the Badgers are unproven on the defensive side of the ball.  They'll suit up this year without Gabe Carimi, John Moffitt, and J.J. Watt.  That could leave them without an effective pass rush.  And their phenom quarterback transfer might not have enough time to get up to speed in a new system and with new teammates.

This is one of the most balanced, physical teams in the country and they barely cracked the Top 10 for crying out loud.  You'd be hard pressed to find a better stable of running backs anywhere, and the Badgers just landed a proven signal caller in Russell Wilson.  Wisky gets its toughest opponent of the season (Nebraska) at home and the only other team that can really challenge them in the Leaders division is hurting.

This team was one bad 2-point conversion call away from winning the 2010 Rose Bowl, and landing in the preseason Top 5 where they belong.  I'd take them over Florida State, Stanford, Boise State, Oklahoma State, and Texas A&M right now. 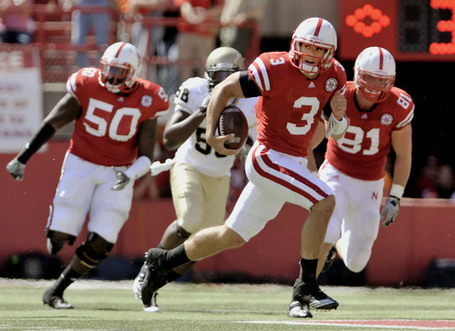 Will he bring the Cornhusker offense back from the dead?

They still have no offense.  I mean do you remember the second-half of 2010?  How about the second half of the 2010 Big 12 Championship Game?  Maybe this will ring a bell.  Still no?  How about this.  Plus they're bound to suffer some growing pains in the transition to the new league.

They're the pre-season favorite in the B1G.  Like Wisconsin they'll have the benefit of facing a watered-down Ohio State.  And the Buckeyes come to Lincoln.  If the Huskers can get out of Camp Randall with a win, they've got a real chance of running the table.

Oh yeah, they don't have to play Texas either.

Like the porridge in the story of Goldilocks and the Three Bears this ranking is just about right.  Potential aside, this is still a team that lost 4 games in 2010.

Jim Tressel, one of the most successful coaches in the program's history is gone, and so is the automatic 10-win season.  Also AWOL is Terrelle Pryor.  Say what you want about consistency, Pryor was the offensive MVP of back-to-back BCS bowls, and he converted literally every third and long the Buckeyes had last season.

Throw in the fact that four starters have to sit out the first five games of the season, the (purported) trial by fire baptism of a freshman quarterback, and the potential for program crushing sanctions being handed down in October and you've got a recipe for disaster.

It's Ohio State.  There's more talent on that squad then the rest of the Leader's Division put together.  The defense is bound to perform at a near championship level, and they've still got arguably the best center in the country and a punishing array of weapons in the backfield.

Not to mention they've won at least a share of the last 6 B1G championships.  Sleep on the scarlet at your own risk.

My gut says 16 is a little high.  Let's re-evaluate after that Week 3 trip to Coral Gables. 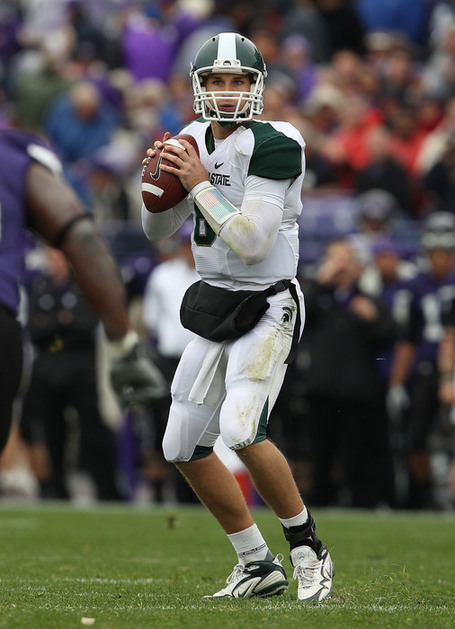 Kirk Cousins has the poise to lead Michigan State to another landmark season.


It's too high because:

Last year's team only beat one opponent that finished the season in the Top 25.  And they got manhandled by two of the three best teams they faced.  The Spartans play OSU, Michigan, Wisky, and Nebraska in consecutive weeks.  They're bound to be out of the Top 25 after that gauntlet.

There's not a quarterback in the league that has Kirk Cousins' experience behind center.  Combine Cousins' precision with the brute force of All-B1G running back Edwin Baker, sprinkle in two of the best guards in conference (Joel Foreman and Chris McDonald) for good measure and you've got a recipe for production.

This is just about right for Michigan State.  They'll have plenty of opportunities in 2011 to prove they belong in the Top 15.


It's too high because:

They lack experience behind center.  The roster is susceptible to injuries and a finish against Illinois, Nebraska, Ohio State and Wisconsin is downright brutal.  Not to mention Alabama and Iowa come to town.

It's Penn State.  This is talented team with excellent coaches that is used to playing the big boys.

This is probably a little high for the Nittany Lions considering the schedule.  I think we're looking at a 7 or 8 win team tops.