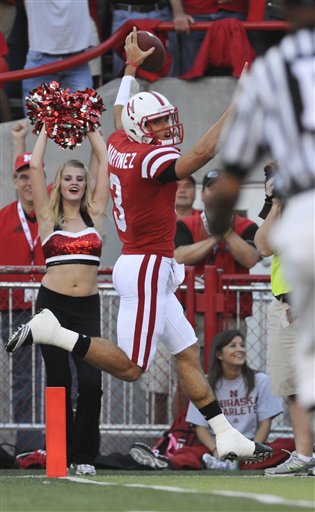 KennardH...speak to us about T-Magic. More discussion after the jump.

Taylor Martinez has the potential to be one of the greatest QBs at Nebraska. He has top-end speed similar to Crouch (he won a Heisman... um, let's move on), and he has a first step that is sneaky fast. With that in mind, everyone in Nebraska has to take a step back and wonder how much of that potential will be truly realized. Of course, wondering about the talent of a QB rises and falls with the type of offense that he is put into.

This leads us to the reality of the Nebraska situation at QB. Last year, Martinez had moments that made him look unstoppable. Ask K-State. Ask Oklahoma State. Ask Washingt... well, maybe don't ask Washington, but you get the idea. Martinez can throw the ball to open receivers, but he has an awkward motion. I would say it is similar to Tebow's motion, but his arm goes back a little more, almost like a pitcher. Still, last year's losses were often not Martinez's fault. For example, in the Texas game, our fair receivers had this fun game of, "let's see if we can make T-Mart look bad," and we dropped something like five passes. In a tight game, that's a big deal. Anyhow, all of this will be moot if he can't gel with Tim Beck, Nebraska's brand new Offensive Coordinator. Sure, he was on staff last year, but he is installing a 'FAST-PACED, NO-HUDDLE, ATTACKING' type of offense. This loosely translates into, 'well, at least we don't have Watson anymore."

All that to say, we will see how this next year pans out. Martinez is a unique talent who played as a Redshirt Freshman and who is learning the game on the fly. He takes a lot of hits, and needs to get better with holding onto the football, but I am sure that he will be given a better opportunity to succeed this year. That's really all we can ask for (seriously, 9-6 football games suck... a lot).

A mediocre passer with sketchy mechanics (any word on whether they've improved during the Spring ball?) 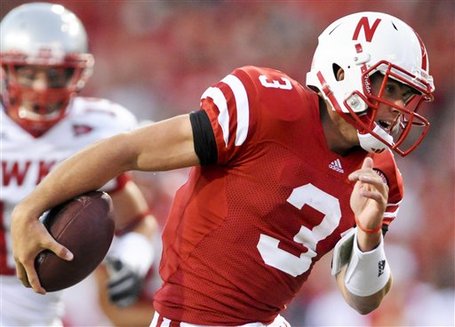 Stupid questions that will be asked this offseason even though we already know the answer:

Can Martinez stay healthy the entire year? (Yes. Both T Pryor and Scheelhaase ran the ball a good amount of times in option or rollout scenarios and survived entire seasons..and T Magic outweighs Scheelhaase by 10 lbs.)

Are Martinez' spats with Bo Pellini worrying? Are his "silent moments" worrying? (Both yes. A QB's mental make-up is important; anything irregular can make or break an individual...or force a transfer.)

Can a running QB survive in the B1G? (Absolutely. But Taylor is going to get hit early and hit hard.)

It's a tired old story: Nebraska, an uber-talented team in 2010, fell apart on offense when their run game floundered. We won't beat that story to death. But if you see a cohesive Nebraska passing attack early in the 2011 season, watch out for T-Mart and the Cornhuskers. A passing attack makes the Cornhuskers B1G favorites.