UNLV at No. 11 Wisconsin (ESPN, 7 p.m.): The win should come easy, but I want to see Russell Wilson integrate his athletic ability into the Badgers offense. 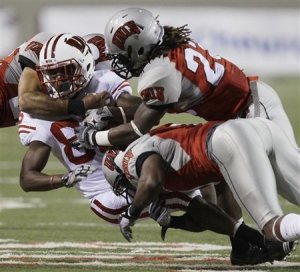 Youngstown State at No. 17 Michigan State (BTN, 6:30 p.m.): The win should come easy, but I want to see if someone fills Greg Jones's shoes.

And now on to the Saturday fare...

Akron at No. 18 Ohio State (ESPN): The win should come easy, but I want to see someone make a statement as the rightful heir to the Ohio State QB Throne. 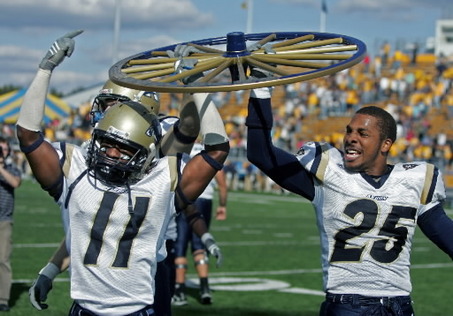 Hey, we're not the only ones who play for questionable traveling trophies.

Indiana State at Penn State (BTN): The win should come easy, but I want to see if the offensive line will be any better than it has been the past two years.

Tennessee Tech at Iowa (BTN): The win should come easy, but I want to see if the defensive line can recover from the losses of three NFL draft picks.

Northwestern at Boston College (ESPNU): This one won't be as easy, now will it? I want to see Dan Persa moving on a healthy achilles. I'd also like to see the final score be legit. No point shaving...either of you two.

Middle Tennessee at Purdue (BTN): This one could be scary if Purdue isn't focused. Purdue is still listed as a 17 point favorite. That seems high to me. I could see this being a one score win for the Boilers. I want to see if Caleb TerBush can manage the starting duties (and not rip his ACL).

Minnesota at No. 25 USC (ABC/ESPN2): I don't expect this to go well. Vegas has USC as a 23.5 point favorite. That might be a bit much, but I don't think I'd e willing to take the points, given the choice. Tim Brewster's crew was able to keep this close last year. I want to see if Jerry Kill's running attack (which is a good matchup for Minnesota against USC) can do the same. How weird would it be if the conference's 15 year losing streak to USC was ended by Minnesota? 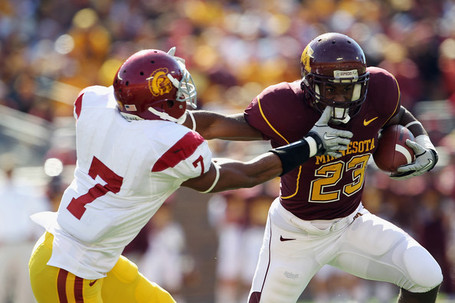 You can do this, Goldy.

Chattanooga at No. 10 Nebraska (BTN): The win should come easy, but I want to see the Huskers throw a shutout and announce their presence (and B1G arrival) with authority.

Arkansas State at Illinois (BTN): I want to see the Illini start the season 1-0. Now that they're not starting the year in St. Louis versus Missouri, that should happen. The beauty of this game? It's time. Starting this year, the BTN will be able to show games during the 2:30 slot. That should keep us from having the 11 AM pile up of nine games at once.

Western Michigan at Michigan (ABC/ESPN2): The win should come easy. I want to see how Denard Robinson can throw the ball.

Indiana vs. Ball State (ESPN3, 6 PM): In 2009, Alabama began their season with a non-conference win in the Georgia Dome and ended their regular season winning the SEC Title Game back in the Georgia Dome. I do not think that we'll see Indiana do the same, but I want to see them win this one.

I expect we'll see 11 wins. I'm nervous about Northwestern, and will be until I see a Persastrong foot/ankle. I think Purdue is playing a team that will let them catch their breath before the hard stuff comes. But outside of those two, there is no reason that any Big Ten team should win by less than 10 points.

What We Had Last Year

We did better than we had the previous couple of years. The Big Ten finished 35-9 (.795) out of conference. The league went 7-5 against BCS Conference teams (plus Notre Dame). The league had four losses (Northern Illinois, Toledo, Fresno State and South Dakota) to non-BCS teams, two more than 2009. Here's to that number being zero in 2011.