This isn't the B1G's week. I don't mean that they're going to do poorly, only that the attention this week will be focused on the ACC. Every year, the ACC manages to have one weekend where all of their key nonconference games come to a head. Every year, the league loses the majority of them and the conference fades into irrelevance. This year, the ACC has four huge games, all of which are on home soil. Maryland hosts Big East favorite West Virginia. Miami hosts our own Buckeyes. Clemson hosts defending national champ Auburn. And in the game of the day, Florida State hosts top-ranked Oklahoma. Sweep, and the ACC can argue that it should be looked at as the second best conference in the nation. Get swept, and it'll be forced to make a difficult case that it's better than the Big East. Like I said, it's a big weekend in southeast.

Now on to the games that matter...

Eastern Michigan at Michigan (BTN) I want to see Denard Robinson grow as a passing quarterback. He could run through the Eagles for 60 points. What can he get with his arm?

Penn State at Temple (ESPN) Has the statement "If you have two quarterbacks, you have none" ever been more true than in the Lions' game against Alabama? I want to see one of these two step up and take the job. Finally. 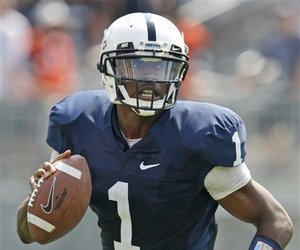 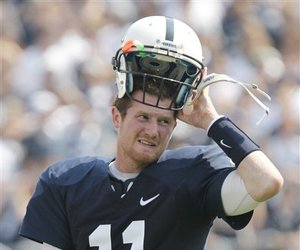 Anybody want to step up? Please? Maybe? Someday?

Southeast Missouri State at Purdue (BTN) Fix it. The defense. The offensive lapses. Fix it. I want to see this team show me that it's of a better class than Minnesota and Indiana. Because if it can't show it this week, it could just be that it's not just injuries that are holding the Boilers back.

Pitt at Iowa (ESPN2) I want to see Iowa get off the field on third downs. Iowa State went 13 of 20 on third down against Iowa. It was pathetic. It also hearkened back to the worst moments of the 2010 season. I want to see that end now.

Miami (OH) at Minnesota (BTN) I want the Gophers to rise up and shove our founders' (and RedHawk alumni) predictions back in their smug faces. 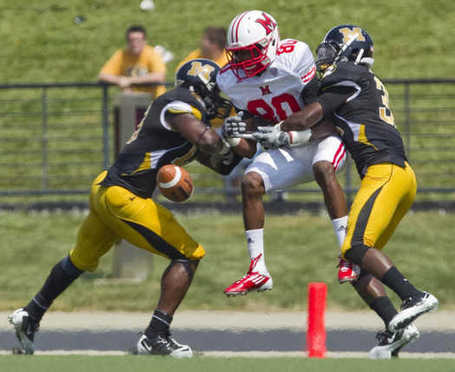 Mizzou did it. Minnesota can, too.

Northwestern at Army (CBSSN) I want a win. I also want the rest of the PersaStrong Heisman promotional materials to be donated/recycled.

Michigan State at Notre Dame (NBC) I want to see the cataclysmic meltdown that happens among the Irish partisans as they drop a second straight heartbreaker to the state of Michigan. Let's make that happen, Sparty.

South Carolina State at Indiana (BTN) SC State isn't even a good FCS team. I want to see Indiana get it's act together and show how it will score enough that it can win a B1G game this year.

Northern Illinois vs Wisconsin (ESPN3) I want to see the team keep improving. Despite Oregon State's conference affiliation, this is the best team that the Badgers play in the noncon. A convincing win will say a lot.

Washington at Nebraska (ABC - with ESPN reverse mirror) I want to see Nebraska show me the defense that I had heard so much about during the off season. I sure haven't seen it yet.

Arizona State at Illinois (6 PM, BTN) I want a win. I think that this is the most fascinating game of the day, and I think that we're going to learn a lot about the Illini. A win, and they may have a solid case that they're the second best team in the Leaders. I sure didn't see that coming. 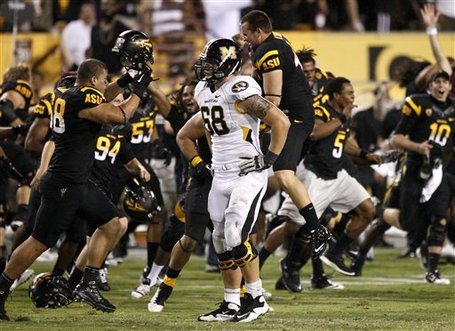 If Illinois can never beat Mizzou, can they beat the team that beat Mizzou?

Ohio State at Miami (Florida) (7 PM, ESPN) I want Ohio State to win the IneligiBowl, and then I want the comparisons between the schools to end. Yes, they both have committed multiple rule violations, but lumping the Ohio State wrongdoing in with Maimi's is a lazy error of scale and severity.

I want 11 wins. I want every BCS opponent's scalp. I'm resigned to Minnesota losing, but if they want to step up, I'm all in favor of that, too.

I think that this is a huge weekend for the Big Ten, too. Pitt. Arizona State. Notre Dame. Washington. Miami. At best, they're good teams. They may not even be that. If the league drops three, or heaven forbid four, of those games, it will establish that the league is going to be down this year. A sweep, and some of the bad taste from last Saturday can be washed away. I expect something in the middle. The league takes four of those five, loses another MAC game, and sails on with a 10-2 week.

The Big Ten sits at 17-7 (.708) out of conference. The league is 3-4 against BCS Conference teams (plus Notre Dame). The league has three losses (Ball State, New Mexico State, Rice) to non-BCS teams.