The Big Ten Expanding to 16 Teams: It's Time to Work Your B1G Quads

Share All sharing options for: The Big Ten Expanding to 16 Teams: It's Time to Work Your B1G Quads

Yes, this is an article about B1G expansion. However, let me be clear about what this article is not. This is not an article that 1) presumes to know how the B1G will act. I have no inside knowledge (and will not act as if I do); 2) spends a lot of time worrying about who would be added; and 3) cares whether 12 teams or 16 teams is better. You can find enough on those topics elsewhere. This article is about logistics - namely, how can we best make a 16 team league work. If the B1G did it right, it could be a huge and fascinating evolution in college football. The key, is in the organization.

Here are the current rules of realignment. They're pretty simple.

Now, when I started this idea last week, I envisioned the B1G poaching Missouri and Kansas from the Big 12 and Virginia and Maryland from the ACC. This broadened the media footprint in both directions, and made DC a B1G City. However, now that the ACC has strengthened itself as a survivor (and not just a league to be picked over and then partnered with the remnants of the Big east), I'll go in a different direction.

The new B1G members are Missouri, Kansas, Notre Dame and Connecticut. Why Notre Dame now? Because the school is told that we're moving to four 16 team conferences, with a four team playoff at the end that is only for the champions of the four leagues. If the Irish want to remain in major college football, they have to join. UConn gives a Northeastern presence, a proximity to NYC, and add a strong history in basketball (and being in a BCS bowl in 2010 doesn't hurt either). Missouri and Kansas add two strong athletic departments, two large-ish media markets, and enough recent success in football to justify the move.

Again, I don't want to dwell on the "who" too much. Instead, let's talk about the how.

Here's the problem with two 8 team divisions. You essentially dissolve into two eight team conferences. By having seven opponents that remain on your schedule every year, it makes it almost impossible to have any meaningful interaction with the other half of the league. But, if you're in a four team division, or quad, you only take up three games for division opponents. The rest of the games can be rotated. That keeps more connections among conference mates. That's a good thing.

Now, I'm going to label these quads geographically. Knowing the B1G minds in Chicago, they'll probably call them Legends, Leaders, Heroes, and Hopes. Regardless, you'll get the idea.

If you're looking at competitive balance, these are historically pretty good. Swapping Wisconsin and Missouri might make it better, but I'm willing to let the balance be off just that little bit for the simplicity. Let's not get too hung up on it.

Yes, we're still using a nine game conference schedule. For right now, though, let's focus on the first eight games. Each year, each team will play 1) its 3 Quad opponents, 2) 4 teams from one other quad, and 3) 1 permanent rival. For this article, I've assigned the following as permanent rivals (OSU-Mich; Ill-Pur; Kan-Mizz; Neb-PSU; MSU-ND; MN-WI; IA-NW; Conn-Ind). They're no worse than the permanent rivals that the Big Ten assigned last summer.

So, let's look at Ohio State. In year 1, the B1G South will play the B1G East. Ohio State's schedule would then be Illinois, @Missouri, Northwestern, @Indiana, Notre Dame, @ Penn State, Purdue, and @Michigan. In year 2, the quad rivals and Michigan will stay on the schedule while the B1G West rotates in place of the B1G East. Year 2 for OSU has @Illinois, Missouri, @Northwestern, Iowa, @Kansas, Nebraska, @Minnesota, Michigan. In year three, the B1G North slides in. 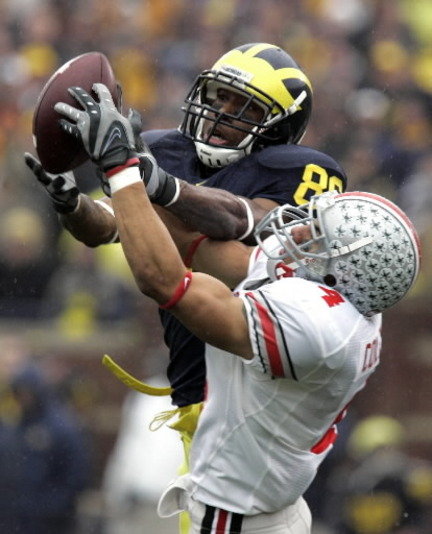 Ahhhh...but then wouldn't there be two Ohio State-Michigan games? No. When a permanent rival game appears due to quad rotation, the league swaps opponents. In year three, Ohio State-Michigan and Nebraska-Penn State both would be played during the quad rotation. Instead, Ohio State plays Penn State and Michigan plays Nebraska as the rival game. So, OSU's schedule in year three would be Illinois, @Missouri, Northwestern, @Connecticut, Michigan State, @Michigan, Wisconsin, @Penn State.

Here's the beauty of this system. This ninth game isn't just another conference game. It's a semi-final. Each year, the quads will know if they are hosting or traveling for Thanksgiving weekend. However, they will not know the opponent. For example, in Year 1, The B1G East will travel to the B1G West, and the B1G North will travel to the B1G South. The quad matchups will rotate each year (Year 2: West at North; South at East).

By having entire quads travel or host, each team will know how many home and road games it will have each season, even if it doesn't know its final opponent. In Year 1, the B1G West and South will have five home games (i.e. that's the year to play a road non-con game). In Year 2, those two quads will have 4 home games (i.e. play all three non-con games at home).

As for the actual opponent, each team will face the school in the same place in the standings at that point. So on Thanksgiving weekend, you might see this:

Now for the bottom six of those games, it's just the last game of the regular season. But for the quad champions, it's a B1G Semi-Final, with the winners moving on to Indianapolis to play in the B1G Title Game in the first week of December. Do you think ABC or FOX would pay B1G money for a Thanksgiving Saturday doubleheader of the two semi-finals? Think it'll draw ratings? It'd be huge.

And best of all, because it's being done within the confines of the conference schedule, and without adding to the 12 game NCAA schedule, it's completely within the existing rules.

Make it happen. Like I said, we can argue as to who the right four teams are. Just know that if the league expands, there is a way to do it that completely changes the landscape of college football.