The Nittany Lion Turnaround is back after an UGLY one against the Temple Owls.  This week we take a look at where the PSU offense is in relation to the conference (and the nation) and preview the upcoming game against the Eastern Michigan Eagles.

I tried to think of an uglier win for Penn State, and nothing (since 2002, my freshman year) comes to mind.  It was boring in the first half.  To anyone who wasn't a fan of one of the teams the first half was probably pretty boring.  To a Penn State fan, though, boredom slowly transformed into despair in the second half as time marched inexorably closer to losing to Temple for the first time since 1941.

Penn State's defense, particularly the interior defensive lion, kept getting better and better throughout the game.  The quarterbacking started poor and stayed that way.  Similarly, the offensively playcalling started off week and the coaches successfully kept it that way by seemingly making no adjustments.  Note: Arbitrarily rotating quarterbacks without any bearing on how the game is progressing is not an adjustment. 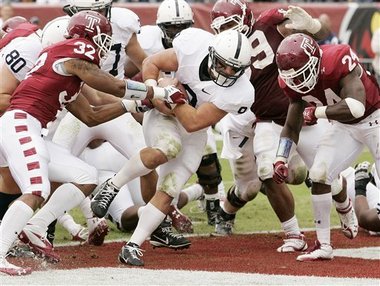 Seven.  As long as Steve Addazzio keeps putting Chester Stewart in every hypothetical game, Temple wouldn't be able to consistently score on Penn State.  Penn State looked bad on offense - gameplanning, execution, everything - and the special teams were hurting as well.  But take away a few key penalties and mistakes and this game would have looked a bit more comfortable.  Temple was bowl game-level fired up for this game, and Penn State's offense has a ways to go, but the PSU roster out-talents the Owls enough that the Nittany Lions are going to win this game, albeit ugly, far more often than not.  A win streak dating back to 1941 is a rare thing for a reason.

Ladies and gentlemen of the jury, Penn State's ability to move the ball and score points in 2011:

Ouch.  In other words, we have the worst offense in the league any way you slice it.  Moreover, we have (arguably?) the worst special teams in the conference when it comes to complementing that lack of offensive production.

Now, if the Big Ten was full of offensive juggernauts this season it may not be too bad.  But philly.com's Bernard Fernandez succintly explains that this is not quite the case:

They are one of only six teams - Florida Atlantic, Alabama-Birmingham, San Jose State, Oregon State and Central Florida are the others - which have yet to be credited with a touchdown pass.

Fortunately, Eastern Michigan is a cupcake.  Right now the line is Penn State at -28.5.  I'd imagine the line is most likely due to the fact that EMU's offense is putrid as well, and against worse defenses.  Michigan just beat them 31-3 last week even after the Wolverines had a slow start.  Penn State's defense is certainly better than Michigan's and will hold the struggling EMU Eagles in check.

And Penn State's offense should follow suit.  Penn State fans expect a romp, a "tune up" to give the team some confidence before the Big Ten slate.  Personally, though, I'll be amazed if Penn State is able to cover this weekend.  It's a bit of a no-win situation: win huge a la Indiana State and people will expect it, win a game that is competitive at all and the internet-sky will come falling down.

EMU's defense is, statistically, not the pushover that it's offense is.  Compounding matters is the fact that Penn State will field the more talented squad, there's a bit of a twist this week:  EMU's coach Ron English (formerly of Michigan) has some firsthand experience with just how stale our offensive coaching can be:

"Penn State doesn't change much over the years," said English, who was a Michigan assistant coach on Lloyd Carr's staff from 2003 through 2007. "I've coached against coach Hall [Penn State offensive coordinator Galen Hall] five times. I see them running very similar plays to what they always have. I know philosophically what they want to do."

Is that coachspeak for "I know exactly what they are going to do"?

If Penn State beats Eastern Michigan, it will be like:

Maximus taking apart some provincial, second-rate gladiators.  Even if the good guys take apart the bad guys with ease, most likely the crowd will still react with some amount of disquiet.  As I stated, it's a bit of a no-win situation.  If Penn State comes out and puts 30+ points on the board in the first half fans will give a gentle nod of the head but still be biting at their fingernails.  Anything more competitive will result in objects being thrown on Saturday afternoon and upper case letters flooding the internet Saturday night.

If Penn State loses to Eastern Michigan it will be like... 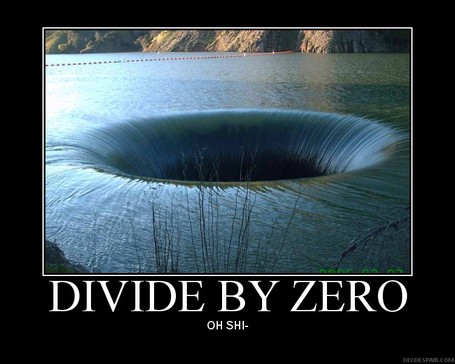 The result of dividing by 0.

In mathematics it is theoretically impossible.  In computer programming it will potentially crash your program. In internet memes it results in the end of world.

Applied to Penn State football, all of these are true.  From a talent standpoint alone Penn State cannot lose this game.  If it were to happen, the season comes off the tracks and maybe Joe Paterno's career goes with it.  And while that only might happen, the internet-end-of-the-world is a certainty.

I'm not a "doom and gloom" kind of fan.  I was really excited following the opening weekend as I'd thought Penn State took care of their cupcake better than they have in past seasons.  I even saw the silver lining during the Alabama game.  Following Temple, though, I'm just praying we don't have 2004 Part 2 on our hands.  I'll believe this offense can be even ok when they show it to us in a meaningful game.

24-6 Penn State wins.  A couple late scores put a little more lipstick on this one after it's still 14-6 after the half.