Backing Off the Ledge: Why Iowa, Penn State, Ohio State, Michigan State, and Northwestern Have Reason to Hope

Share All sharing options for: Backing Off the Ledge: Why Iowa, Penn State, Ohio State, Michigan State, and Northwestern Have Reason to Hope

This Diamondbacks Fan Has The Right Idea for Iowa, PSU, MSU, OSU, and Northwestern Fans

I'm an optimist.  I can't help it, I've always been that way -- I always look on the brighter side of things, and see promise where others see failure.  The first time I went ice-skating, I returned proudly and told my mom: "I was great -- I only fell 8 times!"

Laugh away.  As Nike via Dwyane Wade will tell you, all that matters is if you get back up after you get knocked down.

Northwestern fandom has done nothing to diminish this optimistic streak.  I witnessed Anwawn Jones block a chip-shot FG against 11th ranked Michigan State in 1997 (then coached by Nick Saban....the fact he's a "genius" now after his fairly mediocre showing at East Lansing only shows how important oversigning is to his glory). I screamed at the television during Northwestern's OT win against Wisconsin in Madison and after "Victory Right" at Minnesota in 2000.  I kept the faith after Damien Anderson dropped a wide-open TD pass during the greatest game ever played against Michigan in 2000....and was rewarded when Anthony Thomas fumbled and the Cats escaped 54-51.   I just don't count the Cats out of a game or season until it's over.  My fandom doesn't work that way -- I can't join in the chorus of fans who treat a single loss, no matter how bad, as the end of a season.

Which is why I've hated just about everything I've read from Northwestern fans after the Army loss.  Should Northwestern (or, really, any Big Ten team) beat Army? Of course.  Is it a bad loss? Maybe (keep in mind -- Army was 7-6 last year, went bowling, and won their bowl game).

Does that loss mean our season is over, or that we have completely unfixable problems that will cause this season to fall apart? Hell no. Zero conference games have been played. Zero.  We're all still in this, to some degree (I personally think Wisconsin is clearly the best team, will win the B1G and may be a national title contender, but the rest of us still have a hell of a lot to play for even if that is true)....and we all, still, have some reason to believe.

So for the 2-1 teams that had eyes on the BTN championship/January 1st bowl games (sorry Purdue -- you have reasons for Hope, no pun intended, but probably not THAT much hope) and slipped up, why should you still believe? 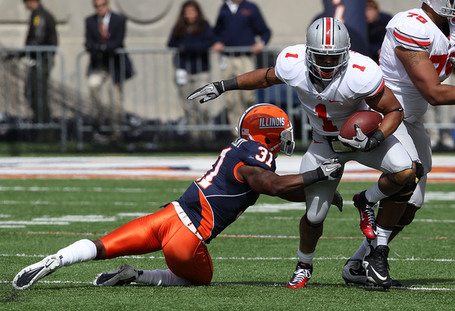 You realize you lost your legendary head coach and your senior starting QB AFTER spring practice this year, right? And that you're 2 more games away from getting back your best WR (Devier Posey), best RB (Boom Herron, pictured above), an excellent D-lineman (Solomon Thomas), and a great OL (Mike Adams)?

With those facts in place, it was ALWAYS going to be hard to continue your streak of B1G championships (real or vacated), especially with Wisconsin ascending with the off-season addition of Russell Wilson. But that doesn't mean this season will collapse in failure.

Getting those 4 players back will be key, obviously -- huge boost to the offense (regardless of who is at QB), and some more depth on a defensive line that struggled to stop Miami's running game last week.  Colorado is bad, and you'll be fired up to win.  Michigan State's offensive line injuries make them vulnerable, and you play them at the Shoe.  Nebraska's vaunted defense has been more myth than reality against inferior opposition so far this season, and, oh yeah, you'll have those 4 suspended guys back by then.  You're in the Leaders so you get to play Indiana and Purdue who are struggling.  Michigan's defense is still a joke.  Penn State comes to the 'Shoe with serious questions at QB.  Wisconsin, as tough as they are/may be, still have to come to Columbus.

Isn't 9-3 or 10-2 still reasonably in play here? Given the offseason you just had, I'd say that's a fairly good/great outcome (just so long as one of those losses isn't to Michigan, am I right?)

First, that Iowa State team you lost to in overtime? They're currently 3-0 after beating UConn, a BCS team last year.  It was a rivalry game, and weird stuff happens in those games (see: Minnesota over Iowa in 2010).  Get over it, it wasn't a bad loss.  (A tough/exasperating loss? Maybe.  But not a bad loss.)

Your season was always going to be a bit difficult with the graduation/NFL losses you had in the offseason -- it's tough to replace that much DL talent and a pretty great/steady QB.  Vandenberg has frankly been great, and at some point Coker's gonna turn it on, right?

You get to play all three of the B1G bottomfeeders (Minny, Purdue, and Indiana), you get a bye week right before the start of B1G play heading to a Penn State team you've owned recently, Michigan's defense is still a joke, MSU's O-line injury problems are well documented, you miss OSU, Wisconsin, and a tough Illinois team, and (as much as it pains me to say it) at some point Northwestern's run of magic-aided victories over you must end -- quite possibly October 15th under the lights at Kinnick. 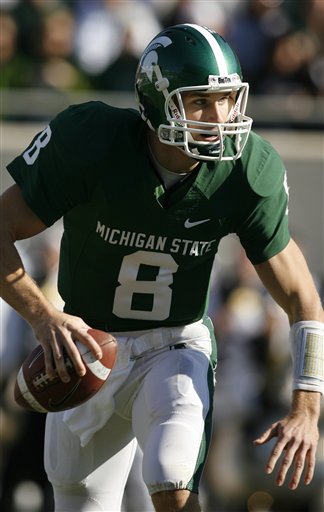 If you were being completely honest, you'd have to admit -- you got a LOT of lucky breaks in 2010, didn't you?  And having to replace both tackles and the center on your O-line was always going to be a challenge in 2011.  Losing to That Team in South Bend sucks, I'll grant you that, and it particularly stings when you know Big Brother managed to beat them.

But you're still led by one of the most experienced, steady, and accurate QBs in the conference in Kirk Cousins.  The offensive line has been banged up and lost some key players for the season, but they'll improve in time.  Edwin Baker and Leveon Bell will, at some point soon, absolutely blow up and destroy a team -- they're just too talented not to do so.  There's still tremendous talent at the skill positions.  You get Ohio State before their suspended quartet returns, Michigan's defense is still a joke, Nebraska hasn't been as crazy dominant as they lead us to believe, and you have games against B1G bottomfeeders Indiana and Minnesota, and unlike Iowa, you've demonstrated the ability to beat Northwestern fairly regularly under Fitz.

I'll admit, this is a hard case for me to make, simply because of the QB question marks and a pretty daunting schedule.  Until the Matt McGloin/Robert Bolden question gets decided, it's hard to see Penn State joining the conference elite.

But then again....there's Penn State's defense.  Look -- holding Alabama to 27 points and less than 375 yards, when your own offense wasn't doing much of anything? Not easy -- I'm sure many if not MOST SEC teams will struggle to hold Bama's offense to 27 points and less than 375 total yards this season.  Losing to Alabama is DEFINITELY not a bad loss, which is more than can be said for most of the other teams on this list.

Silas Redd is one of the best running backs in the conference, and Derek Moye is the complete package at wide receiver -- effective catching the ball, running in open field, and blocking.  JoePa has been around a long time, as well as his coaching staff, and can make the adjustments necessary. Indiana and Purdue are struggling, Iowa's hex on Penn State has to end sometime, Penn State has owned Northwestern of late, Illinois and Nebraska both have to travel to Happy Valley, and Ohio State's QB question marks mean that if Penn State's defense can stop the run, they'll have a chance to win in Columbus.

9-3 may be a best case scenario given the tough schedule....but it's not impossible.  Particularly if the Nittany Lions solve the QB question. 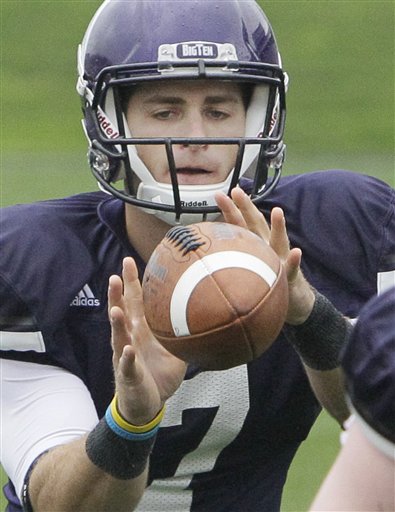 I obviously (and perhaps deservingly) got some flack for saying that Northwestern would go 11-1 this season.

It's still possible, though. Because.....#PersaStrong.  As both Adam Rittenberg and Sippin' On Purple report, Dan Persa is back starting October 1st against Illinois.

The loss to Army was, frankly, disappointing as a Cats fan.  A B1G team should beat Army almost every time....but the loss was not without glimmers of hope.  Going into the season, the biggest question mark was the Northwestern defense.  Well, Northwestern's defense held Army to their lowest yardage totals of the year (387 yards, 4.72 yards per play) without 2 starting/rotation D-linemen (Jack DiNardo and Brian Arnfelt), 2 potential pre-season starting LBs (Collin Ellis and Roderick Goodlow), and a starting/rotation safey (Jared Carpenter).  Northwestern's defense has only allowed 19.7 ppg, and held 2 pretty good running games at least by reputation (BC/Army) in check/below their averages.  Northwestern's defense CERTAINLY isn't great, or necessarily even good....but it's played better than last year.

Where Northwestern struggled against Army was on offense -- only one 10+ play drive (a category Northwestern led the NCAA in last year), only 14 points, a missed field goal, and basically an inability on Kain Colter's part to hit his wide receivers cost the Wildcats this game.  Throw in injured RB Adonis Smith, and a still-recovering from a concussion Mike Trumpy (1A and 1B on the depth chart), and the offense didn't move/score enough to win (especially compared to the 2 previous weeks where NU racked up rushing yards against Boston College -- a tough rush defense -- and Eastern Illinois).

This week's bye week came at the exact right time, allowing the Cats to get healthy, and re-focus after a tough loss.  No one knows what to expect from Dan Persa....but he was All Big Ten last season, is an extremely accurate passer, has a plethora of talented WRs to target (Jeremy Ebert, Drake Dunsmore, Demetrius Fields, Rashad Lawrence, and Christian Jones among them) and should benefit from what appeared to be (before last week) an improved rushing game.

Illinois is clearly going to be a tough game, but it's a rivalry game, and the Cats should be the healthiest they've been all season and fired up with Persa's return. Michigan's defense is a joke.  Fitz has magic to deploy against Iowa.  At some point, Penn State's run against Northwestern will end (the last 2 seasons, NU has coughed up 2nd half leads to the Nittany Lions).  NU has games against B1G bottomfeeders Minnesota and Indiana (plus a non-con game against Rice) left on the schedule.  Michigan State comes to Evanston for the season finale and has a banged up O-line (and needed a near-miracle last season to beat NU).  And Nebraska hasn't impressed as much as they assumed they would so far this season.  And there are no games against Wisconsin or Ohio State.