When it rains... Your Saturday Conference Open Game Overflow Thread

Share All sharing options for: When it rains... Your Saturday Conference Open Game Overflow Thread 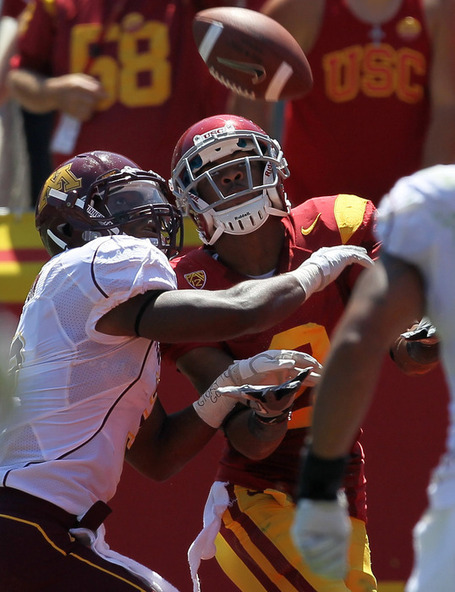 If Michigan's rain delay lasts much longer we might get the first night game in the Big House a week early.  But weather aside, it's hard to deny that it's been a solid day for the B1G.  The Silver Bullets posted a shutout in Columbus, and Joe Bauserman looked like a Baus.  A Persa-less Northwestern took a two touchdown lead on the road against Boston College, and held on for the win...  (As an aside, raise your hand if you live in Evanston and like the new 10-second clock runnoff rule.)  Purdue came back to avoid the conference's first ugly loss.  Minnesota played one hell of a second half.  And although there are no moral victories, Gopher fans have to be pleased with the never say die attitude their team displayed in Los Angeles.  Meanwhile Iowa, Nebraska, Penn State, and Illinois rolled, and the defending national champion Auburn Tigers needed two touchdowns and an on-sides kick recovery in the final minutes to top a WAC team at home. SEC! SEC!

As the angry sky darkens over the Midwest, let's turn our attention to the national stage, where No. 3 Oregon is primed to take on No. 4 LSU, and No. 5 Boise State suits up against nineteenth ranked Georgia.

This is your Saturday conference open game overflow thread.