South Dakota State at Illinois (BTN): The win should come easy. I want to see the defense continue to improve. The offense could be something special. 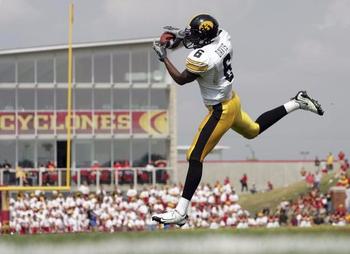 It was fun in 2009. Let's see ISU play that tight cover defense again.

Florida Atlantic at #17 Michigan State (ESPN2) Ohh, Sparty. I'm worried about you. The performance against Youngstown State didn't give me a lot of confidence. The win should come easy here, but I want to see the defense tighten up. It's going to need to before Notre Dame.

Oregon State at #8 Wisconsin (ESPN) It will be a 9 AM PDT kickoff for the Beavers. I expect to see Wisconsin up four scores before they fully wake up. I want to see Russell Wilson continue the Cam Newton impression that he started last week.

Toledo at #15 Ohio State (BTN) I want to see the ridiculous winning streak against Ohio teams continue. I don't want to see Ohio State looking ahead to their upcoming games against BCS foes.

#3 Alabama at #23 Penn State (ABC) I want to see the quarterback situation settled. I want one of these two men to step up, against a premier defense, and claim the job. I don't expect a win, but that would be a nice bonus for the Lions. 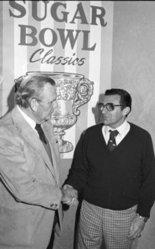 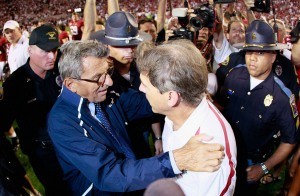 There's a lot in common in these pictures.

Purdue at Rice (CBSSN): I want a win that doesn't involve beating a bad team in the last minute. The team is just good enough to get to a bowl game, but it needs to get things together to make that happen.

Eastern Illinois at Northwestern (BTN): The win is not in doubt; I want to see butts in the seats. This is a fascinating team that (shhhhh...) might just be positioned to make a serious run at Indianapolis. Let's see the fan base appreciate it.

New Mexico State at Minnesota (BTN): Last year, after a solid performance against USC, the squad went into the tank for the remainder of the Brewster Era. I want the exact opposite of that to happen. I want to see the Gophers build upon their second half in LA. That should mean an easy win here. 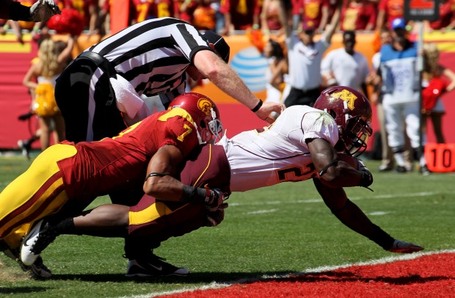 Fresno State at #10 Nebraska (6 PM, BTN): California beat these guys by 15. I want a twenty point win. Nebraska should be able to do that.

Virginia at Indiana (6 PM, BTN): I want a win. I don't expect it though. Virginia is a year ahead of Indiana on the "right the ship" plan, and I don't think that Indiana can keep up with them.

Notre Dame at Michigan (7 PM, ESPN) I have a bad feeling about this. If you just look at the Notre Dame loss, you would expect that Michigan should take this one. But, did you see how they lost? The Irish shot off every appendage they had. If Brian Kelly fixes that, is Michigan good enough to win? I want to see the Michigan defense hold Notre Dame under 24 points. I'll take my chances with that.

I want ten wins. I don't expect Penn State or Indiana to be included in that count, so if one of them could give us an upset, I'll be much happier. The Big Ten plays five BCS teams this week. We really need a winning record in those games.

Penn State still can't handle Alabama's defense. Notre Dame plays smarter than last week. Indiana is still Indiana. Either Purdue has a lost trip to Houston, or Iowa loses to little brother. The league goes 8-4, and we hear a bunch of negativity.

The Big Ten sits at 10-2 (.833) out of conference. The league is 1-1 against BCS Conference teams (plus Notre Dame). The league has one loss (Ball State) to non-BCS teams.