Every year, we profile the biggest games, best wins, worse losses and biggest moments of the Big Ten season, month by month. To be sure, 2011 wasn't exactly all roses in the Middle West. In fact it was the worst year in sports I can remember. And that's just not a reflection of the turmoil which engulfed my personal rooting interest. It's a referendum on the state of college athletics in general. That's where our story opens. In the midst of a dark and volatile storm. Realignment talk overshadows the first week of actual football. It's a sign of things to come...

But we don't know that yet. As far as we -- and by we I mean the mainstream media -- are concerned, illegal benefits at Ohio State are THE WORST THING IN THE HISTORY OF THE WORLD. Opportunistic journalists are flocking to Columbus by the boat full to uncover the proverbial smoking gun. For the rest of the conference things are looking up. After two years of exchanging love letters and whispering sweet nothings over the telephone, the B1G is finally going to get its hands on Nebraska -- the first new conference member in 18 years. Local sports pundits are having a grand old time making B1G Championship Game predictions.

It's September. The trees are still green. The grass is brown. And things are about to heat up -- on and off the field. 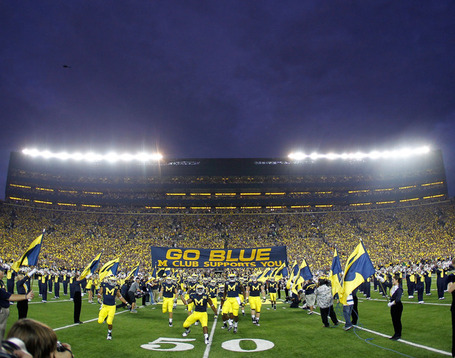 It was a night game atmosphere that would have made the SEC proud.

I don't exactly know what it says about the conference that the biggest game in the first month of the season was between two dusty, unranked, former powerhouses, but this was Michigan's first official night game in 131 years of playing football, and like Norma Desmond, it did not disappoint. Pre-game discussions centered on the odd fashion choices made by both teams. Michigan, with its Rugby-striped, faux crackled "Bumble-bee" throwback uniforms, looked like Euro Cup all stars, and Notre Dame put a shamrock on its helmet just like old times...or not. Michigan didn't take its first lead until there was only 1:12 seconds to play, and promptly lost it when Tommy Rees hit Theo Riddick on a 29-yard bomb to put the Irish up with 30 ticks left. Denard Robinson responded a lightening fast 16 yard touchdown strike to Roy Roundtree to give the Wolverines the win, and my DVR box a coronary.

This one might not have made such an impression on me, but for the fact that pre-season Heisman contender Dan "Persa Strong" was sidelined. Nobody gave Northwestern a chance on the road, but Kain Coulter quickly showed that second string doesn't have to mean second class. Coulter's 197 yards in the air and 71 on the ground helped the Wildcats out to a 24-10 lead, and Pat Fitzgerald's defense held on -- coming up with a huge stop on 4th and 10 with under 3 minutes to play and the Eagles driving for the tying score. It was a solid opener for Northwestern, and for Chad's early season credibility. 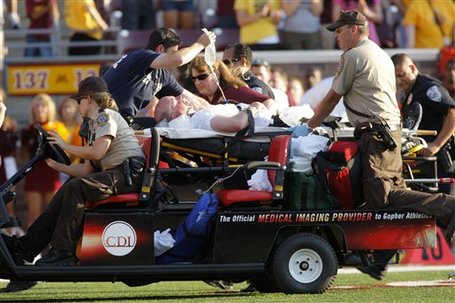 It was a good reminder that there are a lot of things more important than football.

Minnesota seems to have this spot locked down, and try as I might to give them a breather, they just keep coming up with mind-boggling ways to lose to inferior opponents. One week after giving an eventual 10 win USC team all it could handle in the Colosseum, the Golden Gophers came out flat as a pancake, and let the Aggies jump out to a 21-7 lead at TCF Bank. Marquis Gray tossed up two interceptions, and the Gophers gave up 421 yards to a mid-major that had nine penalties and would go on to finish 4-9 with just two wins in the WAC. Read that last part again. This was a two win WAC team that came into Minneapolis and walked away with a B1G scalp. Not cool. Worse yet, new Minnesota Head Coach Jerry Kill collapsed in a scary scene on the sidelines. Fortunately, Coach Kill was okay, but the Gophers couldn't pull off a comeback in his absence. 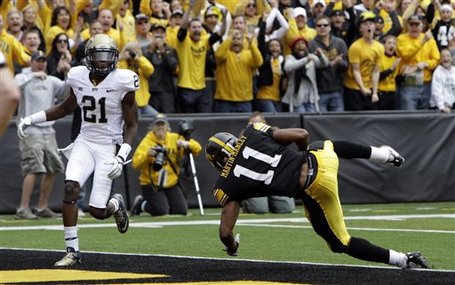 It was the capstone to the comeback.

When Pittsburgh kicked a field goal to go up 27-10 with 12:09 to play in the fourth quarter of this September 17 matchup, Iowa's season went on life support. The Hawkeyes were one week removed from a devastating triple overtime loss to rival Iowa State, and seemed poised to start the season 1-2. The groans from the home crowd were understandable. So Kirk Ferentz did something uncharacteristic. He opened up the playbook. Quarterback James Vandenberg responded to the new mandate by hurling touchdown strikes of 14 and 25 yards to bring the Hawks within three. The defense stepped it up, and with almost three minutes to spare, Vandenberg found Kevonte Martin-Manley from 22 yards out to bring the Hawk's season back from the brink.