Share All sharing options for: Joe Paterno To The Penn State Community

When I started classes at Penn State as a freshman in 2002, I didn't "get it." I was prepared for the academics and even the social life. However, I was a New York Giants fan expecting the Nittany Lions to be essentially the same thing as my favorite pro team but right on campus. I didn't have family members who had attended Penn State, and so I assumed the coach of the football team was just that: a coach, responsible for winning football games.

In the Fall of 2002, the "Joe Must Go" movement was gaining steam. Over the next two and a half years it snowballed into a crisis. I was young and didn't know too many Penn State alumni, so for a while I was an advocate of a new coach. As far as I knew, that's just what you do after a couple losing seasons.

I didn't get college football in the beginning, I didn't get what the team meant to the university at Penn State, and I certainly didn't get how Joe Paterno fit into it all. I'm happy to say that by the time I graduated in 2006, though, I did "get it." Somewhere between seeing the football program at both its depths and its heights, and watching one man negotiate those turbulent times, I understood that Joe Paterno was a lot more than just a coach.

The Sandusky scandal has complicated his legacy, dashing an impeccable record. But Penn State fans don't need to remember him as an infallible legend. To us, Joe Paterno will be remembered as an historically extraordinary man, the rare individual who stepped into our lives and made our community a family.

When you leave home for college you take a step away from your friends and family and venture into some degree of the unknown to learn about the world, about yourself, and to start growing up. You'e generally very impressionable regarding the community you've joined. At a big football school, like any of those in the Big Ten, you have an additional layer of community. You become united by a passion for your team and the common language of Football Saturdays. It stays with you for the rest of your life.

At Penn State, we had something above and beyond the shared experience of the team. Beyond the consistency of the uniforms, the chants, and the tradition, we had an individual. We had Joe Paterno. And by "we," I of course means decades and decades of Penn State alumni. And having one man, flesh and blood, means something different than sharing a fight song or a third quarter chant. It became similar to sharing a member of your extended family, sharing that person with every Penn Stater you ever met.

We didn't let Joe into our pseudo-extended family just because he was the coach, though. His aim was not just to make good football players out of young men, but to make them into good students, husbands, and fathers, roles he knew they would play far more throughout their lives than running back or linebacker. And he didn't just preach values to players, or demand diversity in the sport, or any of the other litany of accomplishments you'll read about him over the next few days. On top of it all he was accessible, he was a character, and he was the kind of everyman that you had to embrace. A middle-class home that students could drive by. His phone number was listed in the phone book for anyone to look up. Over time, the anecdotes and stories you could hear about the man became ubiquitous. What Penn Stater doesn't know someone who was recruited by Joe decades ago, only to bump into him in an elevator many years later and have the man remember his name?

For so long, Joe Paterno was not just synonymous with Penn State, but also with his pristine record, both in wins and losses and "doing things the right way." He was a patriarch to the Penn State community, its father figure, and the one professor that all of us that went through Penn State shared. The one that taught the course on living a good, hardworking, and decent life. 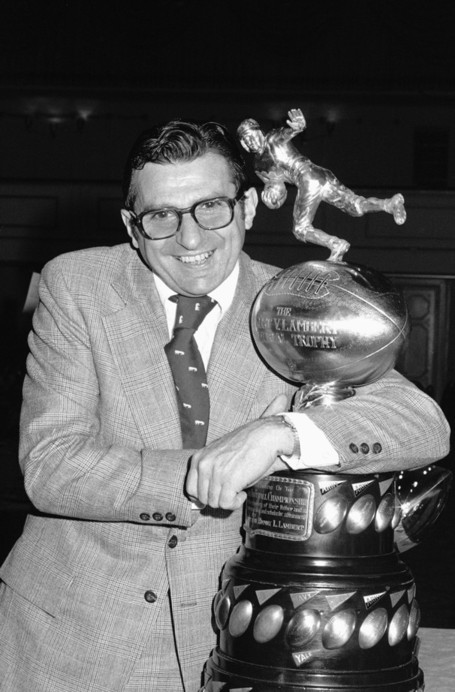 So now that Joe is gone, what was his legacy? How do we weigh the decades of success and countless lives positively impacted against his perceived shortcomings related to the Sandusky scandal?

I don't think that, even before the Sandusky scandal, Joe Paterno should have been remembered as a perfect human being. None of us are. Joe Paterno was not the superhuman icon of integrity that we've seen him conveniently packaged as on TV and in magazines.

Paterno was a real person, faults and all, just like us. More so than the average college football follower or the American public, we Penn Staters were close enough to see the man, the everyday, ordinary man, behind those coke bottle glasses. Joe was a real person, and one who made his mistakes. Most notably would be his self-admitted mistakes in relation to Sandusky, where he did what was required of him, but did not do everything he could have.

I think the reality that Joe Paterno was a fallible person is a major part of why Penn Staters held him in such high regard for so long. We were always close enough to separate Joe Paterno from the Joe Paterno Statue. We knew him as a man, not as an image.

The fact that he was a regular guy, like us, underpinned the effort and the vision that were required for him to accomplish all he did. Aspirations differ; we all hope for success, and along the way we are all met with some failures. Some people aim higher than others, though, and some believe in themselves and their success, kindling the passion necessary to stay the course. Joe Paterno made mistakes, like we all do, but he had that belief and that passion, which so many of us lack, and lead a life of phenomenal achievement that left untold numbers of people who met him better for it His drive was what inspired us, astounded us, and made him a hero in the college football world. His humble, generous way of going about it made him Penn State's hero.

Joe Paterno may no longer be known as a mythical paragon of integrity. He remains an example of what extraordinary things an ordinary man can achieve in this life.