One player, one beer, many opinions

Here at Off Tackle Empire, we like B1G football, and we like beer. Even in a down year for the Good Guys, we still have a player that stands out above the rest, one that is deserving of the soon to be Internationally acclaimed OTE B1G Player Of The Week.

Our inaugural award winner is QB Braxton Miller of Ohio State. Miller had another impressive outing against Indiana on Saturday night, as he, along with RB Carlos Hyde, were mostly responsible for OSU's 52 point explosion. Miller has made highlight reel runs and throws all year, and Saturday was an example of his Heisman-buzz season encapsulated in one game. He went 13/24 for 211 yards, 2 touchdowns, and 1 interception. On the ground he ran 23 times for 149 yards and another TD.

He had a two play scoring sequence at the end of the second quarter and beginning of the third that makes Buckeye fans drool. On their last offensive play before halftime, Miller hit WR Devin Smith on a perfect 60 yard bomb to end the scoring for the half:

Then, on OSU's first play of the third quarter, Miller, running from a shotgun/spread option formation, faked a handoff to Carlos Hyde, went OFF TACKLE...NOW DO YOU SEE WHY IT'S OFF TACKLE EMPIRE, DO YOU?! right, cut back left, used a referee as a screen, accelerated into the second level of the Indiana defense, and went 67 yards untouched for a touchdown:

So congratulations to Braxton Miller, our OTE Player of the Week.

Now, the OTE Beer of the Week. I tried to pick something smooth and versatile, that reflects our OTEPOTW. A beer that you can casually enjoy while out to dinner with friends, or one that you can pound at a party setting like a tailgate, and one that reflects the crispness of a Midwest autumn. Ladies and gentlemen, may I present a beer from the heart of B1G country, Chippewa Falls, Wisconsin: 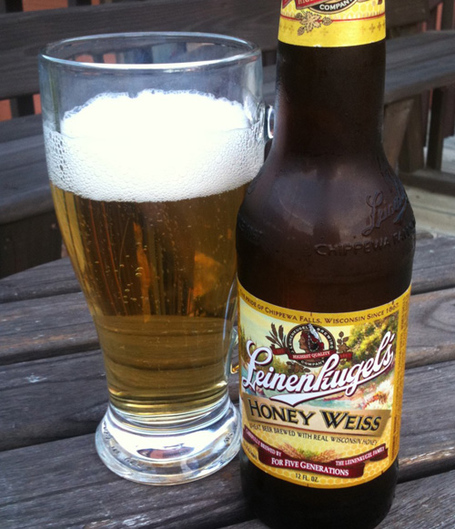 Leinenkugel's is my go-to brand of choice, be it this, the Sunset Wheat, or the original red label. But Leinie's Honey Weiss is perfect for a fall day in the Midwest--heavy enough to know you're drinking a Weiss bier, but not too heavy, like a typical German Weiss bier would be. Enough of a bite that let's you know you're not drinking a run of the mill American beer, but smooth enough that you can shift gears and go from casual setting to 'let's get our drink on' pretty much on the fly.

Kind of like Braxton Miller can shift from throwing to running the ball.

Braxton Miller and Leinenkugel's Honey Weiss, your OTE Player and Beer of the Week.