OTE Player and Beer of the Week: Taylor Martinez and Certified Evil Ale

Share All sharing options for: OTE Player and Beer of the Week: Taylor Martinez and Certified Evil Ale

Player of the Week

Hey everyone, this is a real thing on OTE now. We like B1G football and we like beer and since I am the one writing this piece this week, you all have to know what is coming, right? Oh, you don't? Well, there was plenty of consideration to both the Wisconsin run game and to Matt McGloin for running and passing their teams to success, but the clear cut POTW this week goes to Taylor Martinez. He of both B1G OPOTW and of the Manning Star of the Week List.

What got him here? There's the stat line for one:

Racking up 407 yards of offense on a day where your team had 543 is a big deal. Scoring four touchdowns is a big deal. But the best part? The comeback.

A couple of things to point out because obviously ESPN really cared about the highlights of this game. Martinez completed 10 passes in the two comeback drives and in both TD tosses, was fairly pinpoint. He threw behind when his receivers needed to comeback to the ball and go away from the DB and he hit a back corner route to his receiver almost perfectly. While people still say they are not afraid of what Martinez can do to their team because, "but, but, but HIS THROWING MOTION!!!" they now have to at least perk up and look at the stats. He has the best QB Rating in the conference, most TD throws, highest completion %, and second highest YPA (second to Stave). Oh, and he can still run. Martinez might not be the best QB in the conference, but this whole, "WE WILL BREAK HIM AND HE SUCKS!" mantra has gotta stop. Sure he can be inconsistent, but this year he has shown he's pretty good.

Beer of the Week 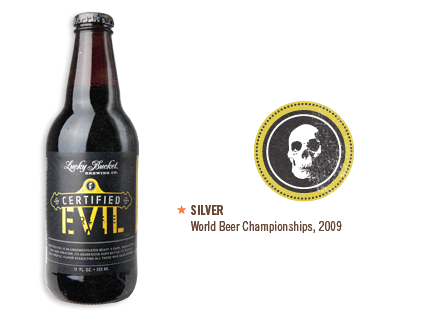 I wanted to stay local because it's the Nebraska way, but I wasn't sure what type of beer personifies Martinez. After I thought long and hard about it (at least five minutes), I settled on Certified Evil brewed by Lucky Bucket Brewing Co. in La Vista. This is a crazy beer with a mix of tastes that can mess with your head. Just like Martinez, this has some roots in California, but is created and developed in Nebraska and just when you think you understand the beer, the next one has a slightly different feel. Also, at 9.6% ABV, this stuff can do wonders after a third interception.

*Certified Evil is brewed by Lucky Bucket Brewing Co. in La Vista, NE. They have many seasonal taps and two award winning brews you can check out throughout the Midwest. You should probably go to their website and check them out here. Oh, and they also have a distillery... so there's that.