With the losses by Kansas State and Oregon on Saturday, it now seems more likely than ever that Notre Dame will meet a school from the SEC in the B1G National Championship game. Off Tackle Empire asks, is there anything worse?

There was a disturbance in the force on Saturday night. And no, I'm not talking about after shocks from the demise of Hostess. Rather, the top two teams in the country lost on the same night. Kansas State was caught napping by the Baylor Bears, and Oregon couldn't quite pull it out against perennial foe Stanford.

While seeing Baylor put up 50+ on K-State wasn't all that unexpected -- even after the departure of RGIII the Bears still have an electric offense -- it was odd to see Kansas State not keep the score close given the pretty much worst in the FBS defense the Bears had all season. I mean, if you can't score more than 3 TDs against a team that had been giving up an average of 500+ yards per game, do you really deserve to be in the NCG discussion? Maybe not.

And then we had Oregon falling to a scrappy Stanford team. A perfect example of what happens when you always go for it on 4th down -- and necessarily hold your field goal kicker to one try on the season before this game -- was showcased by Chip Kelly on Saturday night.

But, while Baylor and Stanford may have won, we all lost.

We lost because this now means that we are almost certain to see a NCG featuring Notre Dame and a contendor from the SEC. There is nothing worse. 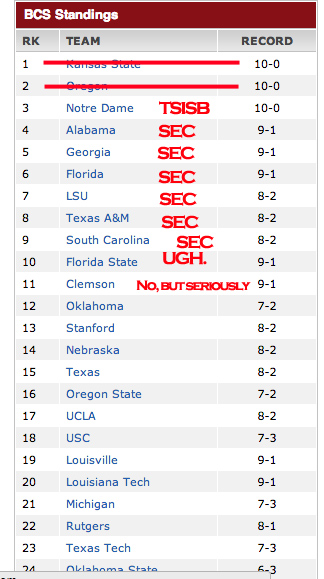 Look at that and tell me how there is a way out for us. Because I don't see one. All I see are visions of a gloating Corso in a shiny gold helmet and legions of PAAAAAAAAAAAAAWL fans.

Because what, really, is the alternative? That we cheer for USC (really?) to take down TSISB next weekend? What exactly would that get us? Another SEC-SEC title game? Even with the abysmal ratings from last year's snooze fest, do you think the powers that be would skip over that many SEC teams to put Florida State or, excuse me while I laugh, Clemson in the title game?

No, the worst thing possible has already arrived. The four horseman are here. And we are powerless to stop it.