I thought Inner/Outer (Innie/Outie) was a funny joke. Turns out the joke was on me

Jim Delany is a smart and powerful man. Jim Delany seems to be the only guy we know that can fart the word expansion, and topple two seemingly stable conferences, the Big East and the ACC.

Yes, the Big East imploded earlier today when the non-football schools said 'deuces', and all the ACC needs is one more team to jump. Now, Delany didn't deliver the coup de main to the Big East today, the 7 non-football schools did, but his fingerprints are all over the bodies. All of this started when Jim Delany mentioned that the B1G was looking to add a team. Or two. Maybe 9.

However, with great power comes great responsibility. And sometimes, as you get closer to the inner circle, the King wields his power and does something kind of dumb. Well, more than kind of dumb. Fairly stupid, actually.

Yet, no one wants to tell the King that his idea is stupid, because they talk themselves into thinking that it's a great idea. Phenomenal, even.

'Legends and Leaders is awesome, boss.' See how closer to the light you get, the more blinded you become?

Now, I'm not talking about the actual divisional alignments in this Inner and Outer possibility. I'm talking about the names. The HURR DURR 'Inner/Outer' names that make Legends and Leaders Look like it was several hundred thousand dollars of consulting money well spent.

Well, let's just cut to the chase here. If you click on the link, you get to have input on the future names of the division names in the Big Ten. They are: 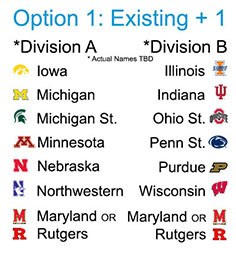 Legends and Leaders, plus 2. Or, alternatively, Party of 7. What...it's not any dumber than Inner and Outer.

Then we have the almost infamous Innies and Outies:

Now, the alignment here is not what bugs me. Other than the yearly ass pain of traveling between Lincoln and Piscataway, the alignment of the teams is actually okay. It's the names. Inner and Outer is already being called Innie/Outie, and it's only a matter of time before it ends up being dick jokes and vaginas. Or Solar system jokes.

Finally, we have something that is so radical, so nuts, so...logical, that there's no way it could ever be considered:

East-west? It's so simple in it's elegance, so logical in it's execution, it's like the original Occam's razor equation.

So go, and give your opinion.

But just remember that it won't matter, and we will probably get Innie/Outie shoved down our throats.

And then we will get laughed at.

Sometimes, being a fan of this conference is harder than getting through an episode of Honey Boo Boo.