Where I Launch Into A Vociferous Defense Of Jim Delany

Share All sharing options for: Where I Launch Into A Vociferous Defense Of Jim Delany

In the winter of 2009, Big Ten commissioner Jim Delany leaned into a microphone and said the word 'expansion'. College football shit their pants, and they have yet to recover from their collective incontinence. He has been described as out of touch, an obstacle to a playoff, and unapologetic about putting his conference above all others.

All of those are accurate, and that is one of the reasons Delany is the best college commissioner out there.

Jim Delany has, from the word go, worked to make the B1G bigger and better, from the day he was named commissioner. Every decision The Godfather has had he works with a decision tree that looks like this: 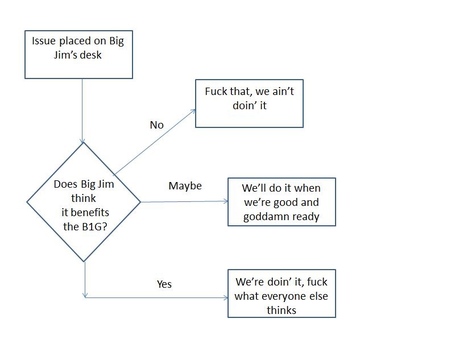 Notice that nowhere in the chart does it say 'see what everyone else thinks', or 'hey, does this benefit the other conferences?' And for that, I cannot and will not fault him. The Big Ten slow played expansion for 20 years. He let the SEC and then the ACC take the lead to 12 teams and a conference championship game, while the B1G only dipped their toe in the pool by adding an 11th team. For 15 years, it benefited the B1G. The conference thrived without a conference championship game.

In the late 1990's, when all of the folks that covered college football clamored and demanded a playoff that 'settled it on the field', Jim Delany would not let go of the B1G's ties to the Rose Bowl, and was the primary obstacle in the formation of a playoff. His obstinance lead to the Bowl Alliance Series, which was the forerunner of the BCS. When Delany didn't get what he felt was the best deal for the B1G--namely, a guaranteed team in the Rose Bowl unless a B1G team was playing in the championship game, the B1G didn't participate. The Bowl Alliance was doomed from the beginning.

That pissed everyone off, but JD was in it for the long play. The Rose Bowl, the Granddaddy of them all, was built by the Big Ten and the Pac 8, and was far and away the most valuable bowl out there--he wasn't going to give it up without the college football world bending to his will.

The Bowl Alliance was replaced by the BCS...which didn't form until JD got what he wanted in terms of the B1G and the Rose Bowl. You can argue that tradition has left the Rose Bowl and the conference, and to an extent you'd be right...but the money from that game is still huge, and the B1G gets that money every year.

In December of 2009, the commish announced that over the next 18-24 months the B1G would look to expand to 12 teams. It would take awhile, and if they couldn't find a suitable school, they wouldn't do it. It seemed like a fairly innocuous statement, but it set college athletics on it's collective ear. What was going to be up to a two year process barely lasted 6 months, and when the initial dust settled, Delany had scored a coup with Nebraska.

That set off a chain of events that saw the Big XII nearly disband, as they also lost Colorado and Missouri, and the SEC expanded to 14 teams. The Big East and ACC scrambled, but seemed to stabilize.

No, we won't talk about the division names. I can't explain that. Can't defend it, either.

Then JD struck again by adding Maryland and Rutgers. Maryland, a founding member of the ACC. Rumors are now flying that the ACC, long thought to be a stable, power conference, is going to implode, and the basketball-only schools of the Big East just announced that they are leaving the conference and forming a basketball-only conference.

But why all the instability? Why does it matter what schools are in a certain conference?

Because of Jim Delany's biggest move of all, the Big Ten Network. We've talked a lot about Delany's 'consider them rolled' moment, and at the time, it was a huge gamble. No one outside Delany thought his network would be successful, or at a minimum it would be a long time before it turned a profit. A few folks thought if it failed and became a money pit it would cost Delany his job.

Which brings us back to conference realignment. I don't think this would be the huge deal it has become were it not for BTN. Every conference is trying to develop their own network, Texas has the abysmally slow to get off the ground LHN, so right now, the B1G is in a unique position--the network gives them a leverage and attractiveness that no other conference has.

Now, this isn't to say that schools in the PAC and the SEC would jump to join the B1G--the PAC just started their own network, and the SEC will start one in a couple years. Those conferences are as strong as the B1G is financially, or will be, so I'm not suggesting that they are in danger of being poached by the B1G.

But for everyone else, it's open season. $40 million dollars a year speaks volumes to schools looking for financial stability, and with the addition of Maryland and Rutgers, the B1G now has a foothold in one of the fastest growing population centers in the country. it's easy to see why that $40 million could go higher.

Jim Delany may have been the biggest obstacle to a playoff, but frankly, I don't care. Under his tenure, the conference added two of the winningest football programs in history, expanded to the Eastern seaboard, launched a television network that is the envy of all other conferences and might be the vessel that one day challenges ESPN's monopoly, and made the B1G the most financially successful conference in the country.

Jim Delany's job is to promote and improve the B1G, and he has done that. Better than any other college commissioner in the land. And as we head toward the superconference era, Delany has been proactive, guaranteeing the viability of the conference for years to come.