It's time for the kickoff of the second game of the All-Time (Since 1996) Big Ten Football Tournament (the explanation is here). Today we will see the Number 12 seeded 2007 Hoosiers of Indiana face off against the Fifth Seeded 1998 Badgers of Wisconsin. Fourth seeded 2008 Penn State awaits the winner in the quarterfinals. But first let's brush up on our competitors. 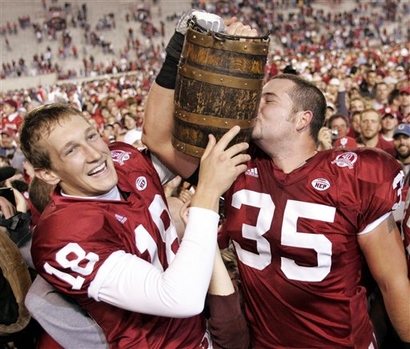 The Hoosiers came close in 2006. If not for a ridiculous loss to 1-AA Southern Illinois, they would have finished 6-6 and been bowling. Still things were looking up. Head Coach Terry Hoeppner had a veteran team coming back, and he instilled the mantra "Play 13." 2007 would be their bowl year. Mercurial quarterback Kellen Lewis led a talented offense that ran a form of spread option. James Hardy and Marcus Thigpen seemed to take turns making big plays. The defense was...well, it was better then it had been. Then, the unthinkable happened. Terry Hoeppner was diagnosed with brain cancer in the Spring. It would prove fatal in June. Offensive coordinator Bill Lynch was elevated to head coach, and he proclaimed that the 2007 season would be dedicated to Indiana playing 13 for Hep. The offense was fantastic. Greg Middleton and the defense were just good enough. When Austin Starr's 49 yard field goal beat Purdue, Indiana had won their seventh game. There would be a 13th. 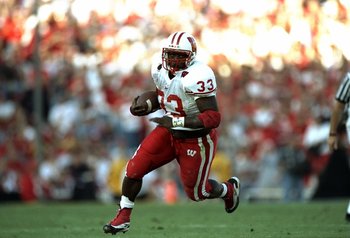 This is Big Ten Football. Big. Beefy. Powerful. Pounding. Relentless. Of all of the teams in this tournament, the 1998 Wisconsin Badgers epitomized the thoughts of what Big Ten football was all about. Led by All-America Running Back Ron Dayne, the Badgers pounded their way to the Rose Bowl. Quarterback Mike Samuel was a game manager, but he did have an incredibly talented weapon in wide receiver Chris Chambers. While not an all-time great, the defense was strong, holding seven of 12 opponents to single digits. The Badgers were thought to be outmatched by Bruins, who were a season-ending loss away from playing for a national championship. Wisconsin put those thoughts to rest with a 38-31 win.

It did not start well for the Badgers. After the teams traded punts, a 36 yard run by Marcus Thigpen set up a short touchdown pass. Two plays later, Tracy Porter intercepted a Mike Samuel pass and brought it back to the Badgers' 20 yard line. That led to a one yard plunge by Kellen Lewis, and a 14-0 1st Quarter lead for Indiana. Barry Alvarez was livid. The Wisconsin players looked dazed. The Badgers finally got started with a field goal, but it was the last minute of the half that turned the tide.

The Hoosiers defense, which had played so well, finally broke. Samuel hit Ahmad Merritt for a 13 yard touchdown pass. After Kellen Lewis was picked off on Indiana's first play (why didn't you kneel on the ball, Bill Lynch?), another field goal brought the Badgers to within a point. Indiana may have led, but you would have been hard pressed to find a soul who thought they'd hold on. They didn't. The second half saw Ron Dayne pulverize the Badgers, with three touchdown runs. The game never really felt in doubt in the second half, and Wisconsin moved on to face the Nittany Lions in the Quarterfinals. 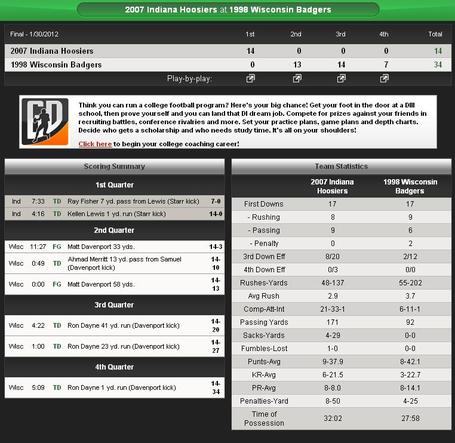 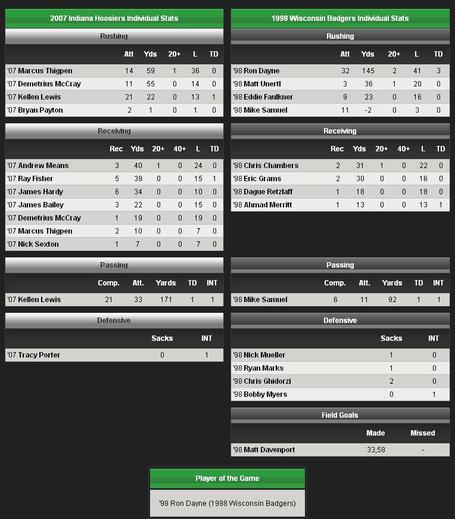 Thoughts on the Outcome:

We all saw this coming. It's not just that Indiana was the worst team in the field, it's that they were the worst team in the field by a lot. And this Wisconsin team is really good. I don't know that there is much more to say than that. We could see a lot of exciting matchups as the bracket unfolds. I'm very excited to see how the Badgers fare against Penn State's run defense.

The emotion I associate most with the 1998 Wisconsin Badgers team is jealousy. Because of this, my memory of what we've decided was the best Badgers team is a bit... clouded. That year, my parents somehow acquired tickets to the Rose Bowl that Wisconsin entered into because of the strange Big Ten tiebreaking rules in force at the time (see, Sparty fans, 2010 wasn't the only time Wisconsin benefitted from tiebreaking rules). But did they bring me? Oh no. Of course not. I was just a teenager. I missed seeing Ron Dayne put on a show that previewed his 1999 Heisman campaign. I missed the Badgers proving Craig James wrong. And I missed out on a victory over a team that seemed bound for a national championship in UCLA. Given the Badgers struggles in recent years with Rose Bowls, missing out on the end of the '98 season seems all the more sad. And the fact that I still feel slighted more than a decade later should tell you just how great this Badgers squad really was. 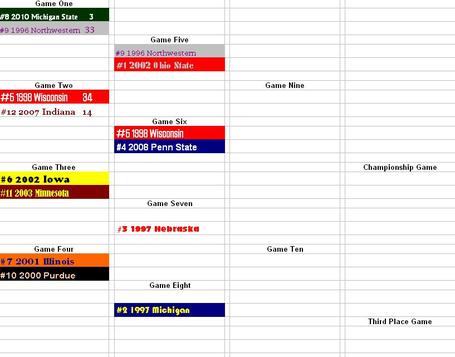