State of the B1G's Quarterbacks: A Stable, Unspectacular Group Headlined By...?

Share All sharing options for: State of the B1G's Quarterbacks: A Stable, Unspectacular Group Headlined By...? 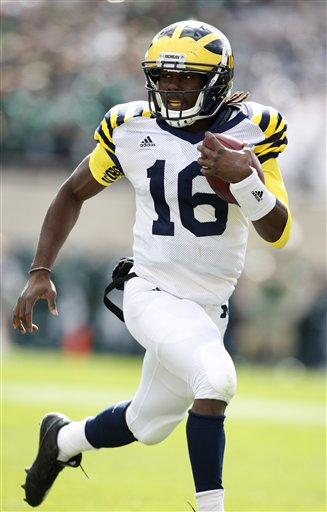 But most importantly, I sit here to warn you - We are not the same pass-happy conference that we were two years ago. The State of the B1G Quarterbacks and Passing Games are in flux thanks to coaching changes and changing offense philosophy.

This is the gold standard of Midwest quarterback performances. Let me give you stats -

(9) This is the number of qualified starting quarterbacks who had a rating of 129.9 or higher. That's unbelievable. Even quarterbacks on terrible teams were putting up great numbers. Hey look, it's Adam Weber and his 20-9 TD/INT ratio! OH, hello Ben Chappell, leading the B1G in passing yards. Wha??? Five quarterbacks had 150+ ratings. Almost every team had a working, dynamic passing game that they were able to depend on if the run got stuffed.

How did this God-blessed passing extravaganza happen? Veteran O-Lines, veteran QB's, veteran wide receivers...and coaching staffs that had been together for a long time.

2011 saw some surprises (Russell Wilson led the damn nation in QB Rating, OSU couldn't throw the ball.at.all), but it wasn't that much of a drop off. Denard improved in conference play, Kirk Cousins and Dan Persa were consistently solid, while James Vandenburg, Taylor Martinez, and Nathan Scheelhaase fell a tad below expectations.

2012 will not be so simple, with tremendous coaching turnover and a few teams that...just haven't quite figured out what passing system works for them. 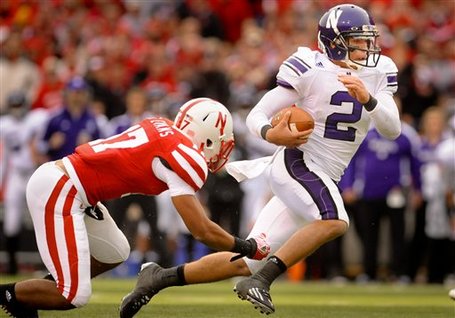 I guess a quarterback's rating isn't a completely individual number. While Andrew Maxwell may be unknown, I can guess that his talent, combined with Sparty's overall solid program and huge number of returning starters, will quickly make him a plus quarterback.

What do we see in this group? Very few big arms. Very few "Jeff George, you go deep and I'll make it work" throwers. Tons and tons of dual threat quarterbacks. Colter isn't much better than Scheelhaase, in fact they're pretty similar, but he plays in a better offensive system. Gray is a top-top level athlete, but his arm is unproven and he...plays for Minnesota. Some comments and questions for 2012:

Will Michigan tweak it's pro-form more in 2012 to fit Denard's talents?

Marcus Coker is gone - How much does that impact Iowa's quarterback play?

Scheelhaase would get pulled at odd times in 2011 and replaced by Reilly O'Toole, a savvy youngster who brought less to the table than Scheelhaase. a) Who created that substitution pattern? b) Will we see it again this year?

Does anyone know what offense Bill O'Brien will be running at Penn State?

If Taylor Martinez struggles excessively at any point, will Bo pull him? What do Nebraska fans think?