Share All sharing options for: The All-Time (Since 1996) Big Ten Football Tournament - Introduction

So here we are. In baseball, they call this the hot stove league. In politics, they call this the silly season. In college football, we call this hell. It's the long period between national signing day and the opening of fall camps. We'll dig for any nugget of news. We crave any angle about our teams.

We're not immune here at Off Tackle Empire. In past summers we have enumerated 80 awesome things about the Big Ten and recapped the previous thirty champions. This year, we bring you something new. Tomorrow starts the All-Time (Since 1996) Big Ten Football Tournament. The ATS1996BTFT (it just rolls off the tongue) will pit the best team from each program against each other in a single elimination, bracketed tournament. All of the outcomes will be reported here at OTE.

Wait, what's this about?

Starting tomorrow, and continuing for the next eleven weeks, we'll pit great teams from the past against each other until we're left with one winner.

There are 12 teams in the tournament, one from each member institution during the past sixteen seasons.

All of the games are being simulated over at Whatifsports.com, and that's as far back as they go.

How did you pick the teams for each school?

I tried to pick what I thought was the best team from each school. I defaulted to champions. So, yes, you'll see all three Big Ten schools' national champions from this era. That meant that 2002 Ohio State is in the bracket, even if some may argue that 1996 was a better squad. Also, when possible, conference champions were selected for each school. Here again, 2000 Purdue was taken instead of what may have been a better team in 2003. When deciding between champions, I tried to select what I believed to be the stronger team. I chose 1996 over 2000 Northwestern, 2002 Iowa over 2004, 1998 Wisconsin over 1999, 2010 and 2011, and 2008 Penn State over 2005 Penn State. I struggled most with the Lions, but after consulting with our Penn State writer, I think we made the right call. For the two schools that failed to win a championship in the last 16 years, I picked what I believed to be the best team from each.

Are the teams seeded?

Yes they are. The three national champions received the three top seeds and first round byes. I struggled deciding between Penn State and Wisconsin for the #4 seed, but ended on the Lions. I filled out the rest of the bracket based on my own perceptions and memories. Here's the draw. 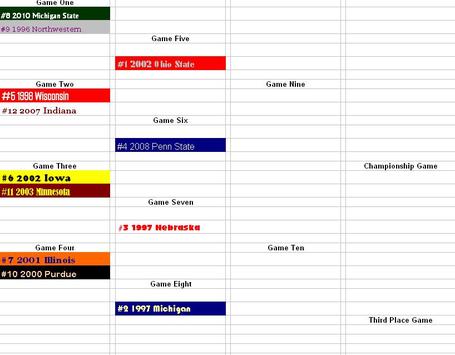 How will the games be played?

Each matchup will be a single game simulated on Whatifsports's site. Each game will be played at Delany Stadium, a neutral field with no precipitation, a light wind, and 50 degree temperatures. In each matchup, what I'm reporting is the first result that comes up.

Wouldn't a best of seven series be fairer?

Of course. A best of 1,001 series would be fairer than that. Look, this won't determine what team is the best. A playoff doesn't do that (remember that as we inch toward that horrible outcome in college football). A playoff determines what team can win a series of consecutive games. Nothing more. Yes, playing a series would be a better determination of which team is better. But that's not how football works, is it? Any Given Sunday Saturday, right? Look, it's great if Wisconsin would win that first round matchup with Indiana 95 times out of 100. But, Indiana still has a one-in-twenty chance. If the right numbers come up, we have an upset. That's part of what makes football, and tournaments, fun.

How do we know that you haven't rigged the results?

You don't. I can tell you that I haven't, but if you don't believe it, so be it. This is for fun. If people can't get past that, then fine. I know that I'll be accused of cheating if Iowa wins a game (or heaven forbid pulls an upset), but I know that I can sleep well at night.

I have no idea. I look at the Top 6 teams and can easily see each of them winning the whole thing. If I had to pick one, I'd say give me Ohio State. It may be the chalk pick, but I didn't put them as the number one seed because I expected them to lose.

If I limit it to teams seeded 7-12, I like 2001 Illinois a lot. That was a really good team that time has forgotten. 2010 Michigan State could win multiple games, or they could get blown out in their opener - just like in real life. We'll see how it plays out tomorrow when they kickoff at Delany Stadium against 1996 Northwestern in Game One of the All-Time (Since 1996) Big Ten Football Tournament. We'll see you then.