The State of the B1G 2012: National Competitivenes Part III - Our Education is Better than Your Education

Share All sharing options for: The State of the B1G 2012: National Competitivenes Part III - Our Education is Better than Your Education

Alright everyone, I am happy to announce that this is Part III of III. The end of a trilogy of pieces aimed to show that the B1G is awesome, but failing to do so. While it has not been terrible news, or rather it hasn't been surprising news, it still has been disappointing. Let's all be honest, we've been looking up at the ESSSSSS EEEEEEEEE SEEEEEEEEEEEEE SPEEEEEEEEEEEEEEED a bit too much. From competition on the field to dollars in the pockets, it has been kind of an obnoxious game of follow the leader.

Still, all is not lost. As I previewed in our first piece, the capstone to this project is all about education. After all, this is still College sports and the NCAA even says education matters, right:

The NCAA's core purpose is to govern competition in a fair, safe, equitable and sportsmanlike manner, and to integrate intercollegiate athletics into higher education so that the educational experience of the student-athlete is paramount.

Following in the NCAA's guidelines, we're going to take a look at Graduation Rates, NCAA APR, and finally try to address the sentiment that the B1G is really all about education. The results aren't super surprising, but it's always nice to finish on a relatively high note.

Alright, so the best place to start in my mind is football graduation rates. If you go to the NCAA site, you can find all of the average rates for any sport, school, conference, etc. The kicker here is that because everything has been realigned to the point of the Big East's sad sad state, it is a bit difficult to really get a good fix anymore. Still, for the sake of this argument, we'll just go with it and assume Nebraska is in the B1G and Colorado/Utah are in the Pac-12 and everyone else hasn't gone crazy.

If I were to give you a guess of who graduates the highest percentage of its players, most all of us would guess that it's the Big Ten by a longshot, right? Well, that's not necessarily true. Using the NCAA's GSR formula which takes into account players who have transferred in/out of the program, the numbers give us a picture of the Big 6 that makes sense. I mean, the B1G's rates are not bad in comparison to, say, the Big XII, but we're not number one either.

As you can see by this awesome little table is that the Big East (pre-alignment) graduated the most players. This takes into account South Florida's whopping 49%. You can owe that to five schools being above 75% and Rutgers taking a whopping 89% for the lead. The ACC is in a similar boat. Surprisingly, Georgia Tech was last with a 55%, but it is offset by two schools (Boston College and Duke) ranking at 93%. What is interesting is that almost no school with a high rate is all that successful on the field right now.

That brings us to our conference. I wanted to take a moment to actually look at how the B1G stacks up. Remember, this is not an exact science so some schools might report this differently, but for all intents and purposes it is what both the NCAA and I use for comparison's sake: 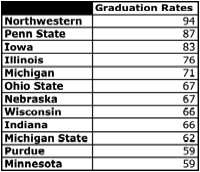 It is worth noting at this point that the B1G has finally beaten the SEC in a metrics! Northwestern is higher than Vandy, the SEC's highest Grad Rate team, and one-to-one, the B1G is stronger across the board. Hooray! Suck it SEC. We have valid proof our schools suck less than yours... or at least we're trying to graduate players more than you, or something to that effect. On to the final analysis point: APR. The weird system the NCAA uses to try and convince us they're actually paying attention to something other than $$$.

Academic Progress Rating: The NCAA's Way of Showing They Care

This is a good place to take things in for a landing. According to our good friends at Wikipedia, the NCAA APR was instituted in 2005. A perfect score is 1000 and after a ridiculous scoring system including grad rates and retention, it is determined whether or not a school is fit for being sanctioned or not. It's a weird scoring system that I'm sure some economist was very proud of. Anyways, you have to be above 925 to not be in trouble. If you're below that number, it means you're graduating less than half your players. Why does a 925 mean that as opposed to say, 500? You got me, but at least you have some background before I show you the table.

Let's take a second to cheer a little bit. This is honestly the first graph I've made that has statistics to back my assertions of the B1G being awesome. WOOOOOOOOOO! Okay, I'm back. Seriously, these numbers are so convoluted and similar that it almost seems like 1000 is a worthless rating. Quick thoughts. Only two teams were below the 925 rating. Neither the SEC or B1G had any. Michigan was dangerously close to the 925 rate, though. We can chalk that up to the RichRod era as well, right?

I don't really have a lot of good analysis at this point, but it is worth noting that the B1G really does seem to back up its education and graduation promises. I do like the fact that Nebraska was a decent addition to the conference. At 958, they are right above the average and keep up the conference's good standing. Still, even with the knowledge that the B1G is all about education, what does it matter?

So I am ridiculously distracted while watching Season 2 of Archer on NetFlix right now, but I do find it necessary to kind of wrap this all up. We've looked at on-the-field competition, money, attendance, ratings, and education. The B1G might not be the best on the competition front on-the-field right now, but they do seem to try and put the right type of student in the right place to succeed. This isn't exactly an attempt to take the moral high ground, but it does seem to align with what the conference believes in from Delany on down.

Where do we go from here? I don't know for sure. I think a good place to start is for fans to assess what they want from the conference. Obviously we would all like a few MNC's and for the SEC to get out of the damn spotlight, but honestly, these things are cyclical. I'm sure that we'd like schools like Northwestern to start getting more fans in the stands, but it's a private school that really embodies some of the core principles of the B1G, and it helps on the education fronts. I'm also positive that we need our power schools to start operating like power schools and for the mid-tier schools to start operating like fringe power schools. All of these things seem to be progressing in that direction, but they all take time. It will be interesting to see where these numbers are next year.