It's time for the kickoff of the opening game of the All-Time (Since 1996) Big Ten Football Tournament (the explanation is here). Today we will see the Number 9 seeded 1996 Wildcats of Northwestern face off against the Eighth Seeded 2010 Spartans of Michigan State University. Top seeded 2002 Ohio State awaits the winner in the quarterfinals. But first let's brush up on our competitors. 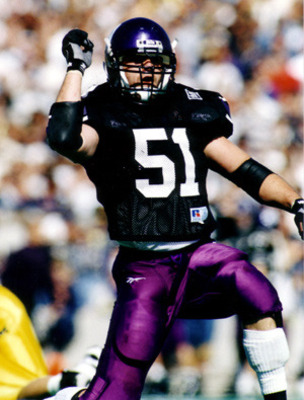 The 'Cats shocked the world by winning the Big Ten outright in 1995 with an 8-0 conference record. The next year, led by returning Senior linebacker Pat Fitzgerald, running back Darnell Autry, and head coach Gary Barnett, Northwestern made lightning strike twice, as it shared the Big Ten crown with Ohio State. The team ran a pro set offense that skewed a little bit toward the run. Northwestern wouldn't adopt the pass-happy spread until Randy Walker became coach. That's part of what made these Northwestern teams so impressive. They didn't try to trick or out-flank anyone. They just lined up and beat them. 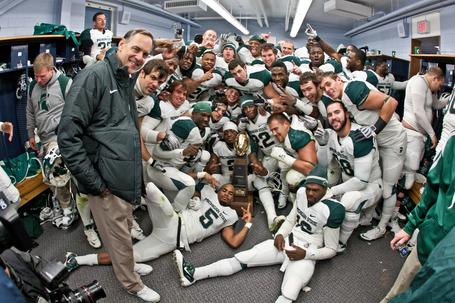 The Spartans didn't really come out of nowhere, but they made quite a lead when they went from a .500 team in 2009 to co-champs in 2010. The defense was fierce, and it was led by linebacker Greg Jones. The offense was balanced, with Kirk Cousins managing the attack. Weird quirk about the Spartans: when they were on, they were great. They beat Co-Champ Wisconsin and won games over bowl teams Notre Dame, Northwestern, Michigan, Illinois, and Penn State. But when they were bad, they were really bad. Iowa and Alabama combined to outscore Sparty 86-13, and it's fair to say that both games could have been worse.

Spartans fans had to feel like they were subjected to the third in a trilogy of bad horror movies. The running game was ineffective. The quarterback threw costly interceptions and looked confused all game. The defense kept giving up first downs. In the end, the result was familiar and unpleasant. The only difference was the the villain wasn't a bird or an elephant, but a Wildcat.

Northwestern controlled this one from their first drive, dominating the game with time-consuming running attack and a precision passing game. When a Kirk Cousins second quarter interception was immediately turned into a 15 yard Darnell Autry touchdown run, it was clear that the Wildcats were going to be moving on to the Quarterfinals and a Delany Stadium date with the Buckeyes. 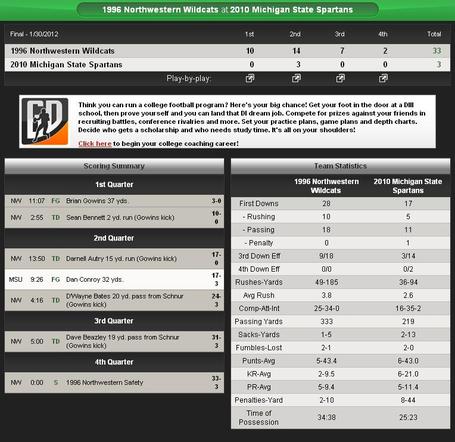 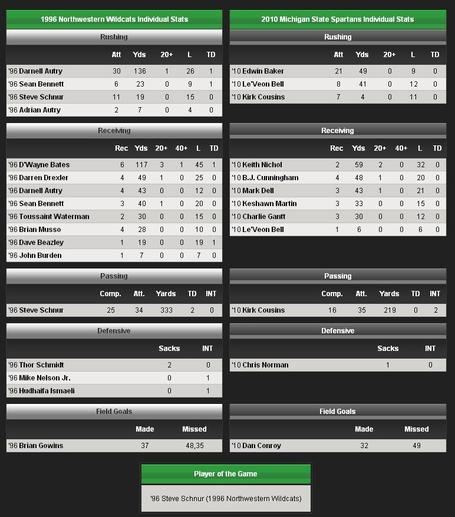 Thoughts on the Outcome:

I have to be honest. I think that I sold Northwestern short. I anticipated a Michigan State victory, and I didn't necessarily think that it would be close. This is where we need to remember that this was a really good Northwestern team. They were a squad that had much more in common with the current Spartans than the Wildcats of today. It controlled games and played tough defense.

As for Michigan State, I admit that I laughed when I saw the outcome. If Sparty was going to lose in 2010, it was going to LOSE. Even in pretend world, that held true. After this outcome, I ran the simulation ten more times. Northwestern won six of those ten, so it's hard to argue that this result is flukish, even if the final score was an outlier.

The 1996 Wildcats were, without a doubt, the best Wildcats team since 1996, and the 2nd best team in Northwestern history, with history dating back to the beginning of college football in 1995 (in all seriousness, they may be the 2nd best team of all-time, too).

It's been said that the hardest thing to do in sports is repeat -- it's hard to climb to the top of the mountain, certainly, but it's even harder to stay there the next year when everyone is gunning for you. The 1996 Wildcats, coming off the greatest turnaround in college football history in 1995 (from the bottom of the conference for decades to the Rose Bowl and Wheaties boxes) did just that -- repeated as Big Ten Champions, and would have been the B1G's 2nd BCS representative that season if the BCS were around back then (both OSU and Northwestern were 7-1 in conference).

And let's face it -- the 1996 Wildcats were a beast, and almost every bit as formidable as the famous 1995 Wildcats. Like 1995, the 1996 Wildcats had QB Steve Schnur (2632 yards passing, 60% completion rate, 17 TDs, 127.7 QB rating), RB Darnell Autry (1452 yards rushing, 17 TDs), and WR D'Wayne Bates (1196 yards receiving, 12 TDs) anchoring an effective and clutch pro-style offense -- the 1996 Cats won 5 B1G games by 4 points or less. The Wildcats defense was similarly stacked -- Pat Fitzgerald returned from the broken leg that kept him out of the Rose Bowl (a leg broken by Iowa in 1995, which the Hawkeyes still feel Fitz's wrath for to this day...in 1996, the Cats crushed Iowa 40-13 in Fitz's first crack at revenge), Barry Gardner joined him in the LB corps, Hudhaifa Ismaeli was a true shutdown corner (arguably one of the best athletes in Wildcats history) joining Eric Collier in forming a formidable secondary, and Matt Rice and Casey Dailey brought tons of pressure on the D-line. And the special teams....well, were special. Brian Gowins was so clutch he beat Michigan twice in 1996 (nailing a second game-winner after connecting on a first try that was called back due to a questionably late "ice the kicker" timeout by Lloyd Carr), and Brian Musso was one of the better punt returners/kick returners in modern, post-1995 B1G history (the battle between him and Tim Dwight in 1997 for most kick/punt return yards was a highly entertaining and underrated storyline in what was a disappointing season for the Cats). 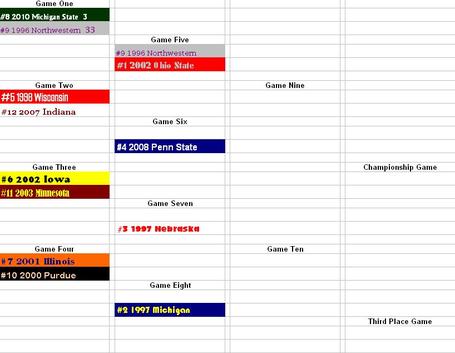