We've got an OTE/SBN/Yahoo Bracket challenge going on, which you can find here. Join it...and promptly embarrass your friends and colleagues by getting unbelievably lucky when some 19 year old kid banks in a three to propel your upset pick to the Sweet 16. You can also find printable brackets here.

Yahoo! Tourney Pick'em supports SBNation and the best college sports tournament of the year. Join the bracket pools of Drew Brees, Michael Phelps, and Lil Wayne-- all while competing in the $5 million Perfect Bracket and $10,000 Best Bracket Sweepstakes. Be part of the best and biggest Yahoo! Sports tourney game yet –

With that said, let's give out some superlatives before we talk B1G matchups. 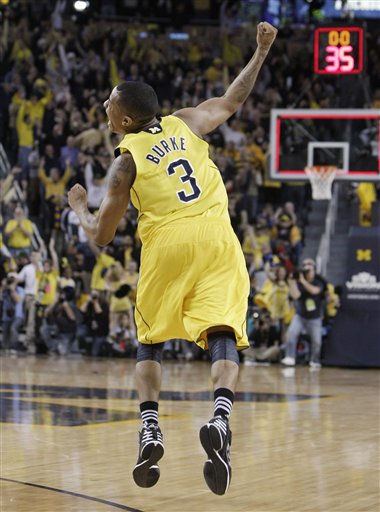 The South bracket, it seems, has more storylines than any other bracket.

#1 overall Kentucky - Can they live up to the hype? Will the freshmen wear down?

The South Region shockingly features three teams from last year's Final Four (VCU, UConn, Kentucky). Although most of the individuals who factored into the success of last year are gone, you've got to fear facing experienced coaches and programs that have proven very recently...that they know how to win.

There is a plethora of hot, hyper athletic teams that is unmatched by any other region, maybe save for the West. I mean - Do you really want to face Baylor and Perry Jones III? Scary UNLV?

What makes a great matchup? Storylines, upset potential, well-known stars, memes that may or may not be proven true.

I'm taking St. Mary's versus Purdue as my favorite first round matchup. You've got senior leadership in spades, consistent programs, and a bunch of dudes who love shooting the three. Plus we'll test out the old "Is a B1G team with a less impressive resume still better than any mid-major" question.

You're telling me you wouldn't sit down and watch ACC champs Florida State versus dangerous, talented, well-coached Cinci? I would.

That's crazy. Last year, only one 5/6 seed was from a non-major conference (and BYU picked up a three seed). Can they deliver or will teams used to playing the Austin Peay's of the world get overrun when matched against the big boys?

MSU - Easiest road, except Mizzou is scary, scary, scary. However - This Spartan team can run AND bang down low.

OSU - I don't fear 'Cuse; they've been breaking down in the Sweet 16 or earlier for a long time. I do fear the lack of OSU depth. Look at the Buck's against MSU when Craft sat thanks to foul trouble with 11 minutes to go; they lost their momentum, never to regain it.

Wisky - I always pick against the Badgers in the 2nd round of the tourney, but never in the first round. Preseason Top 10 Vandy would be a tough second round matchup.

Indiana - No one else in that pod has Cody Zeller...

Michigan - UM wins ugly and they love winning ugly. Great point when it comes to the Beilein offense - Other teams won't be used to the back screens, the read and react offense.

Purdue - Lack of an inside presence may doom the Boilermakers.