Share All sharing options for: Big Red in the B1G: Hope Spring(s) Eternal

It's been difficult for me to write about Husker football since the bowl games. Look, I am as big a Husker fan as it comes. I make rash decisions about football through extremely Red-tinted lenses, and I am definitely more of a believer in Bo than is probably rational. Still, the absolute implosion against South Carolina and the absolute meltdown in Husker Nation was enough for me to take a break from following Nebraska football news for a while. Sure, I took a few stabs at reading up on what happens next and various position battles, and I even made a half-hearted attempt to get into recruiting, but in the end, the end of the season was exhausting. I had to stay away from the local papers and definitely not read any more local comments.

So how did this all happen? Maybe it was my utter lack of perspective and my ill-placed belief in Nebraska's seamless transition into the B1G. Surely a few hiccups were to be expected, but the absolute beatdown at Michigan and Wisconsin and the ridiculous loss at home to Northwestern were just a few of the growing pains of a season filled with change. Perhaps I just was hoping to finally get over that 'proverbial hump' and see Nebraska in a BCS Bowl again. I mean, even moreso, maybe I was just ready to see Nebraska assert some dominance. It just didn't seem to ever come together last year. It almost did against Michigan State, but that lasted all of one week. Still, I can't help but put those things aside and get excited about football... Do you know why?

Spring football is here! There will be lots of new faces for each team, new names to memorize, and endless news about who sucks, who is awesome, and who needs to go away. Coaches will be on hot seats, backup QB's will be rumored to take over the top spots, and all will be well across the B1G landscape. All across the Midwest, teams are kicking the cobwebs and Ferentz is breaking out the speeches about, "Execution." (Note: Pelini has started to harp on this as well... I'm not a fan). Let's just say everything seems right. It's a great time of year where we all can start dreaming about something better and where everybody has a chance. There are new coaches all over the place and we'll start breaking them down I'm sure. After the break are some random thoughts I have on Nebraska's offseason, the B1G, College Football, and other stuff... But before you go there, behold the B1G Spring Schedule in MS Excel form (Now with more color!): 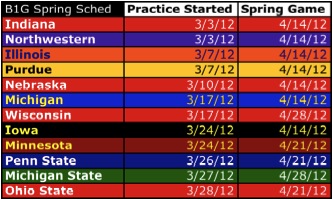 Note: Iowa is actually not playing a 'Spring Game' but rather doing some sort of scripted practice thing. Soooooo, yeah.